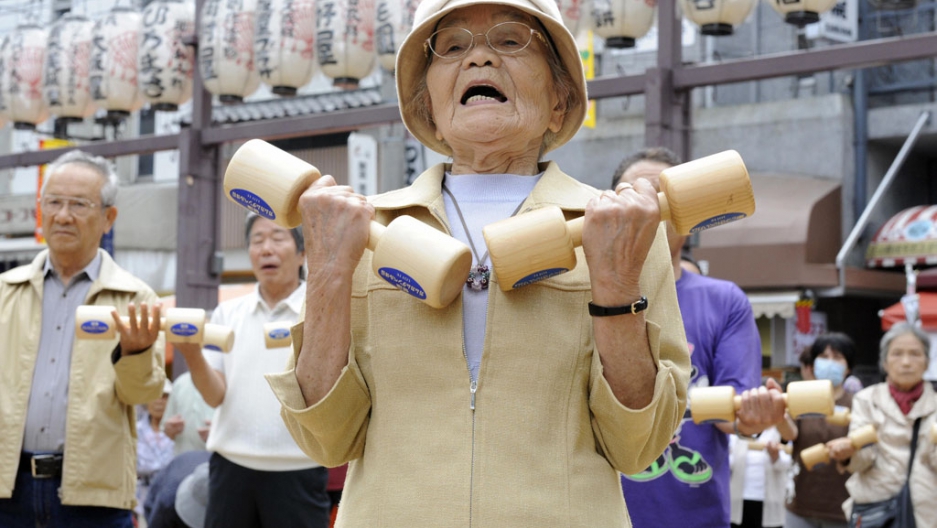 Elderly people work out with wooden dumb-bells in the grounds of a temple in Tokyo.
Credit: Yoshikazu Tsuno
Share

That's the partyline of one Yasuteru Yamada, 72-year-old retired engineer hell-bent on getting his hands dirty at the Fukushima power plant.

Why should Japan's young people risk their lives getting the nuclear disaster at the defunct plant under control, when the nation's elderly could do the work without paying the price?

"Even if I were exposed to radiation, cancer could take 20 or 30 years or longer to develop," Yamada said. "Therefore us older ones have less chance of getting cancer."

With TEPCO confirming that three of the reactors are likely to have suffered meltdowns, is this a kamikaze mission? asks BBC.

Yamada laughs off any such comparison.

"Kamikaze is something strange," he says. "No risk management there."

So far, 200 retired engineers and others (all over 60) have joined the Skilled Veterans Corps, as they call themselves.

There is a cook and a singer among them, lest anyone get hungry or demand entertainment while working.

The authorities haven't said OK to Yamada's plan yet, but honestly, what are they waiting for?

This guy knows what he's doing and he's ready to go. Let the old people in!

Perhaps they will be swayed by the U.N. nuclear agency preliminary report of exactly what went wrong at the plant — starting with the fact that it was hit with a 30-foot-high tsunami on March 11.