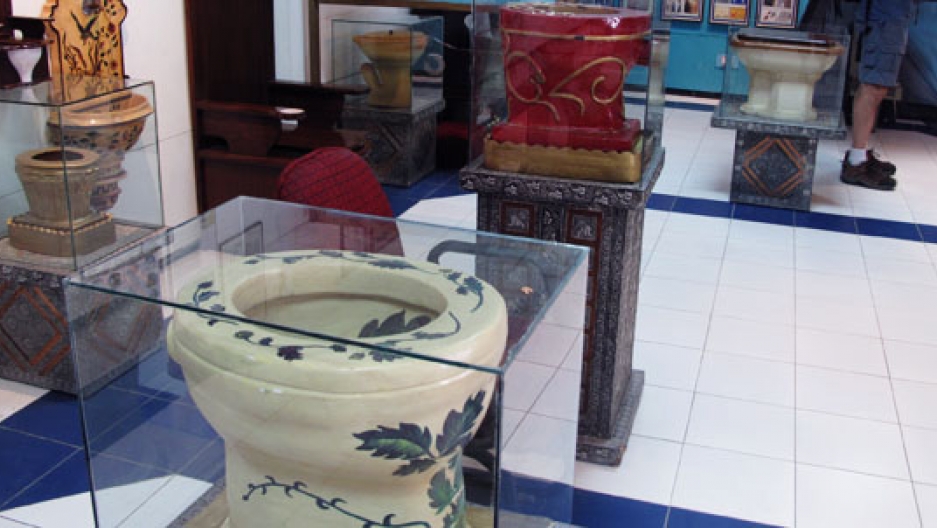 The Sulabh International Toilet Museum is located in a quiet courtyard in a neighborhood far from the heart of India’s capital city, New Delhi. It may seem like an unusual place for what may be the world’s only toilet museum. After all, millions of Indians still lack access to toilets and basic sanitary facilities.

But if you can find your way to the museum, you’ll meet a man eager to make your trip worth it.

The museum is small, with just one long room inside a low-slung concrete building. But it is filled with exhibits that have, not surprisingly a touch of bathroom humor.

Qamar shows me a Japanese toy that teaches children about toilet training.

“They made a piggy bank, so coin will be deposited in the bank,” he explains. Once the coin is deposited, the toy makes flushing sound. That way, “children will never forget to flush,” Qamar says.

Across the room there is a full-size replica from the court of the French King, Louis XIII. Qamar tells me that it was both the King’s throne and his toilet. He lifts the base of the seat, revealing the commode underneath.

“He never hesitated to relieve himself while giving audience,” he says. “Actually he was just trying to manage his time. So instead of laughing we should appreciate it.”

Then there is an exhibit on the oldest example anywhere of large-scale urban sanitation. There are a series of pictures showing the remains of the Indus Valley civilization, which existed in the Indian subcontinent some 4,500 years ago. The pictures are from archaeological sites northwest of New Delhi in parts of what are now India and Pakistan.

This ancient civilization had brick-commodes in every home. And the commodes were connected to a network of drains so sophisticated that they could rival those in many modern Indian cities. But that technology now exists only in history books and places like this museum.

“Still in India, more than 600,000 people go outside for defecation,” says Bindeshwar Pathak, the man who started Sulabh International, the organization that runs the museum.

That means nearly half of India’s population does not have access to modern toilet facilities. And changing that is the not-so-subtle mission behind this museum. It’s part of Sulabh’s decades-long effort to improve access to sanitation in the country.

Pathak says India’s sanitation problems stem in part from religion. He says ancient Hindu texts instructed people not to defecate near their homes.

But culture isn’t the only culprit. Millions of Indians simply can’t afford toilets. And those who can often can’t connect them to sewers, because most Indian cities don’t have them.

Even in many households with toilets, human waste is therefore cleaned manually and dumped into open drains and garbage dumps. That means big problems for the environment and public health, from polluted waterways to widespread diseases like tuberculosis.

It also comes with a big social cost. For instance, the people who do the work of cleaning human waste from homes are ostracized.

Nitu Goyar, a young mother from the western state of Rajasthan, says that until a few years ago, she cleaned other people’s toilets for a living.

“When I moved in with my in-laws after marriage, they told me their family had done this work for generations,” Goyar says. “I was told I had no choice but to do it as well.”

She says she sometimes had to walk for miles carrying a bucket of human waste on her head. And when it rained during the monsoons the stuff would often drip down on her. The thunder and monsoon downpour that blew through during my visit to the museum was a stark reminder of that kind of hardship.

Simple Technologies to the Rescue

Sulabh International was started 40 years ago mainly to help people like Goyar. Founder Bindeshwar Pathak figured that more and better toilets and sanitation systems would help liberate millions of untouchables. It would also help solve pollution and water supply problems at the same time.

Today, along with the historical curiosities inside the toilet museum the courtyard outside displays working examples of modern technologies.

There is a brightly painted public toilet complex hooked up to a small waste-water treatment system, and a biogas generator, which turns human waste into energy and fertilizer.

There are also some of Sulabh’s own inventions.

Resident environmental scientist Ram Chandra Jha shows off one of the designs just outside the museum’s door. “These are the models of toilets invented by Sulabh international,” he says.

It looks much like a standard Indian squatting toilet. But the pan below slopes downward. Jha says that it helps conserve water.

“Due to the slope, gravity works here,” he says. “So when we pour water in this, very little water is required, just two litres of water is sufficient for flushing here.” That is compared to the 12 liters used by most toilets.

But the real ingenuity of the design is in what happens below. The waste goes into two semi-porous pits, where the liquid and gases can escape. The remaining solid waste decomposes in just a year and a half, says Jha.

“And after decomposition, there is no smell in that and that is pathogen free almost. And because that contains, nitrogen, phosphate and potassium, so that’s a good manure also.”

Jha says Sulabh has installed more than a million of these toilets across India, including thousands of public toilets, which were once hard to find in this country.

But Bindeshwar Pathak says Sulabh’s work, and this toilet museum have helped start a national sanitation movement, and helped ease the old taboo against even talking about toilets.

“Now they talk about Sulabh toilets while having food,” says Pathak. “Maybe sometime jokingly also, they say, okay I went to Sulabh.”