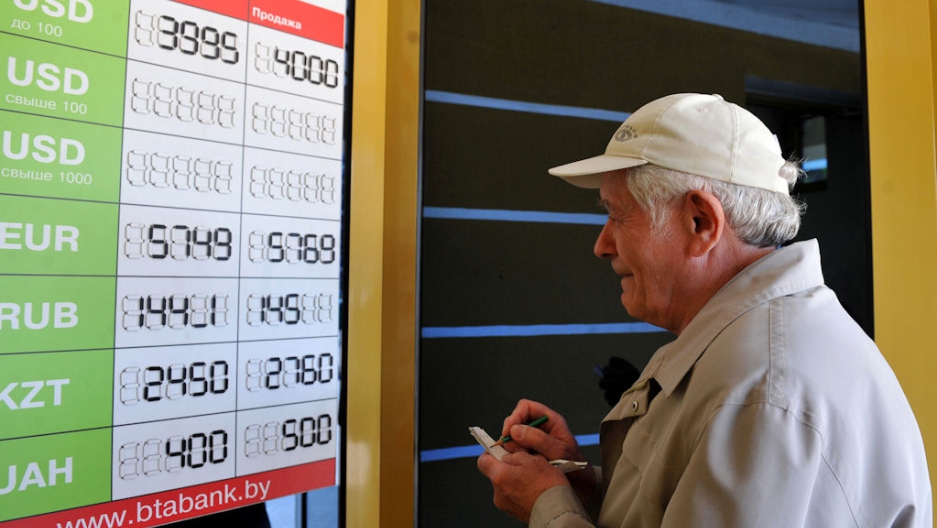 An elderly man takes notes while reading foreign currency rates against the Belarus ruble outside an exchange office in Minsk, on May 11, 2011.
Credit: Viktor Drachev
Share

MINSK, Belarus — The Belarus economy is in a free fall. And it’s anyone’s guess when and where it will finally land.

Across this former Soviet republic of 10 million, the mood is of panic and quiet desperation. Depending on which benchmark you use, the national currency, the ruble, has lost in recent weeks between 50 percent and 200 percent of its value. Salaries and life savings have shriveled. Prices for imported goods — which make up a large part of the economy — have leapt, sometimes four-fold.

“Prices are increasing every day, and practically for everything,” Svetlana, a shopper in Minsk’s main TsUM department store, said as she stood next to her husband. (Most of those interviewed asked for their last names not to be used given the Belarus authorities' political repression and reprisals.)

“We have to economize most of all on food,” she added. “The things we bought before without thinking twice, now we have to think hard whether or not to buy them. If we can do without it, then naturally we don’t buy it.”

At banks and currency exchange points, alarmed Belarusians gather to try to sell their rapidly depreciating rubles for more stable currencies. But the banks themselves have run out of dollars and euros, or are strictly restricting cash trades.

At one branch of the local Absolut Bank, the hard currency ran out a long time ago. A crowd of about a dozen people waited in anticipation that someone would come and buy rubles with dollars, which the bank would then immediately sell to them. Some of the customers had been standing in the bank for days.

Others who have no access to dollars are investing their rubles in items they hope will keep their value. Gold, silver and jewelry are the first candidates — but not everyone has access to these. Others have snatched up fixed-price goods like cars, washing machines and refrigerators. As a last resort they have turned to non-perishable food stuffs, such as salt, rice and sugar. In some areas of the country, store shelves have reportedly been picked clean.

Belarus has not seen a currency crisis of this magnitude since the breakup of the Soviet Union, when the country entered the horrifying terrain of hyper-inflation and millions were impoverished.

Some observers, like Alexei Moiseev, chief economist at Russia’s VTB Capital, believe that such dark days are returning. In an interview with Bloomberg, he said that “a ‘91-style meltdown is almost inevitable.”

But how did Belarus get into this mess?

According to government officials, Belarus is just another victim of the global financial crisis.

But others say that the difficulties are more complex than that.

Belarus until now boasted the highest growth rates and standards of living in the former Soviet Union, outside the Baltics. But its quasi-Soviet, state-run economic model is now running out of juice, experts say.

Its economy depends to a large degree on relatively cheaper manufactured goods and agricultural products that it sells primarily to Russia. The global financial crisis considerably shrunk this market — though in the past year Belarus’s economic growth rate recovered considerably.

At the same time, Russia has been steadily raising the price that Minsk pays for its oil and gas, which had allowed Belarus industry to operate at a much lower cost and keep prices down for the goods that it produced. Minsk also sold Russian oil abroad at a marked-up price, which added billions to the government’s coffers and helped fund President Alexander Lukashenko’s welfare state.

(Relations between Lukashenko and the Kremlin have become almost toxic in the past two years and Moscow officials seem to have at times reached the end of their rope with their longtime, and mercurial, client.)

Compounding these problems, however, is the fact that Belarus has been living far beyond its means. Just before presidential elections, Lukashenko raised government salaries by nearly half, and credit to state enterprises by 60 percent. This, in a country where nearly two thirds of the economy is in state hands, had the predictable effect of blowing out the budget and placing pressure on the value of the ruble.

The country’s hard currency reserves have also plummeted. Since the beginning of the year they have decreased by nearly a quarter.

Other analysts, in contrast to VTB’s Moiseev, say that all is not lost: Belarus could still manage to avoid a complete economic disaster. The difficulty is that the window of time in which government officials can act is becoming ever smaller. And if they fail to address the problems in time, hyperinflation and economic meltdown are indeed very real possibilities.

But, so far, the government — worryingly — seems unable to come up with a viable plan.

“We are not seeing a coherent strategy yet,” said one western official, speaking on condition of anonymity because of the sensitivity of the issue.

In the meantime, ordinary Belarusians can only hope their government will find a way to pull the ruble from its nosedive and give the economy some semblance of stability.