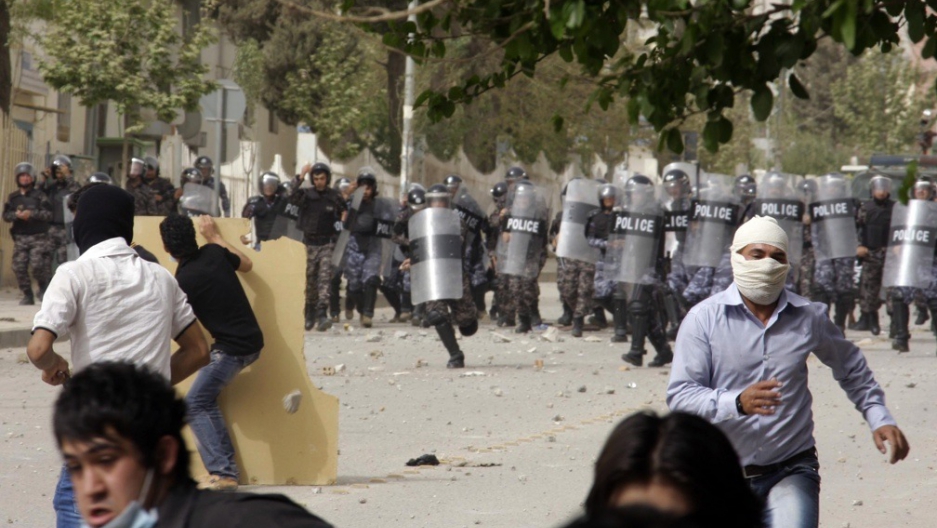 Iraqi Kurdish demonstrators run for cover from riot police during clashes following a protest in the Kurdish city of Sulamaniyah on April 18, 2011.
Credit: Shwan Mohammed
Share

Moments later, he was surrounded by some 50 officers beating him from all sides. Handcuffed and hooded, he was thrown into the back of a car and beaten again as officers discussed whether or not to kill him. Unconscious he was dumped near his home.

“I am used to the beatings and arrests now. This is normal here,” Namiq said as he nursed a dislocated hand while wincing from neck pain. “Especially as the next elections approach, I expect this will happen a lot.”

Amid the turmoil in central Iraq, human rights groups are now turning their attention to this semi-autonomous region, long considered to be a secure, democratic haven.

More than two months of anti-government demonstrations have led to violent crackdowns on what have been predominantly peaceful protests. Protest leaders say 10 people have so far been killed, more than 500 injured and more than 900 arrested by police and government military forces, sparking condemnation from Amnesty International and Human Rights Watch.

Inspired by the success of protests in Egypt and Tunisia, thousands began to gather daily in the town square of Sulaymaniyah and towns across the province on Feb. 17, protesting government corruption, high unemployment and a lack of basic services. Violent crackdowns by party-affiliated military forces stoked anger among the protesters, who began calling for the government to step down and make way for early elections. A final and brutal crackdown by the military put an end to the demonstrations several weeks ago and a heavy military presence still guards the streets.

Amid the violence, Reporters Without Borders released a report listing numerous attacks targeting reporters and media outlets by government forces over the past two months saying these attacks make it “impossible for journalists to work in Iraqi Kurdistan.”

Over the same period, the Iraqi Association for Defending Journalists received 226 reported violations of press freedom in the city of Sulaymaniyah, including physical abuse, injury by bullets, confiscation of journalist's equipment, temporary detention and forced prevention at gunpoint from covering the events.

These figures come as no surprise to Namiq, who in his second year as a reporter for KNN has been severely beaten more than a dozen times, arrested twice, held without charge on numerous occasions, taken to court, threatened with death and his family harassed.

“Freedom is shrinking for the press,” he said. “As long as what we report is not in their [the ruling parties] best interests, we will suffer.”

With Western support, Iraq's Kurdish region gained relative independence from Saddam Hussein's regime in 1991. The region's stability has since attracted foreign investment and steady economic growth compared to the rest of Iraq, which fell into sectarian warfare following the 2003 U.S.-led invasion. Two political parties dominated by two powerful families have ruled the area for the past 20 years, however, and corruption abounds. Recent events have called into question the extent of freedom and democracy in the region, and highlighted the lengths to which the government is willing to go to suppress negative press.

Many journalists reported being specifically targeted by military gunfire.

“They were shooting directly at me,” said Araz Mohammed who was shot in the neck, stomach and leg while reporting for Radio Dang. “They knew I was media because I had my ID badge and camera. One Peshmerga (government military) was shouting at me ‘I will kill you’ as he fired. They had already beaten other journalists and taken them to hospital.”

Fearing arrest for their coverage of the protests, many journalists are now in hiding. Media offices have also been targeted. In the past two months the headquarters of three television stations and two radio stations have been ransacked, shot at or burned down by government military.

“There is a small window open for press freedom here,” said Assos Hardi, editor in chief of Awene, one of the only independent publications in the region. “But during times of conflict or sensitive times the real attitude of the ruling parties becomes clear and this window quickly closes.”

A spokesman for the Kurdistan Democratic Party, Hassan Jabari, said only necessary actions have been taken against protesters and media to restore security to the region. He said journalists do have freedom to report in Iraqi Kurdistan no matter which party they are affiliated with, describing the situation for journalists here as “good; not very good, but good.”

Azad Jondyani from the Patriotic Union of Kurdistan agreed.

“I think there is still freedom, but when there is chaos no one can predict what will happen,” he said.

Jondyani added that press freedom is apparent in the existence of more than 1,400 media outlets operating freely throughout the region. But Faruq Ali, the director of the Payam satellite channel, said it is not the number of media groups operating that is the problem.

“The government allows the creation of media outlets but then crackdown on the reporters in the field, preventing them from working effectively,” Ali said.

Although crackdowns on Payam reporters and TV headquarters have been harsh, Ali admits that the problems with media in Iraqi Kurdistan are not only external.

“There is much disorder and political affiliations in the Kurdish media,” he said. “The media groups do not respect each other. Many reports are based on defamation and lies. Real journalism is not possible here.”

The majority of newspapers, television news channels and radio stations in the Iraqi Kurdistan region are openly affiliated with a political party. Of the few that claim to be independent, funding often comes from a biased source and hidden political agendas prevail.

Rahman Garib, coordinator of the Kurdish-based Metro Center to Defend the Rights of Journalists, said there are many political alliances hiding behind the facade of independent journalism.

“That’s why we have a great amount of unprofessional, unbalanced, even scandalous, journalism on our streets that don’t give any attention to journalism ethics and values. Their only job is to focus their attention toward scandalous cases and some of them just produce lies,” Garib said.

Despite these problems Garib said there are “good seeds” amid the Kurdish media charade that are setting a good example. But lifting local media standards across the board would require a clear mandate of reporting ethics that all media groups can agree on and for international journalism organizations to assist in its development.

Government attitudes, of course, will also need an adjustment.

“CPJ and Reporters without Borders, among other organizations, are giving a great deal of attention to the Kurdistan region and their eyes are on freedom, especially press freedom in Kurdistan,” Garib said. “That’s why KRG officials need to take a more serious look at the violations [against journalists] because this is damaging the reputation of the Kurdistan region and its reputation of freedom.”

While harassment against reporters continues, Akmed Mila, the editor of Lvin magazine, says the risks of “real journalism” are worth taking. He has received numerous death threats and now faces a charge of up to five years in prison for a recent article incriminating government figures.

“It is articles like this that I am most proud of,” he said in his office just two days before his most recent arrest. “True journalism is the kind that starts controversy in the community, not the kind that talks about a wedding in the middle of conflict.”