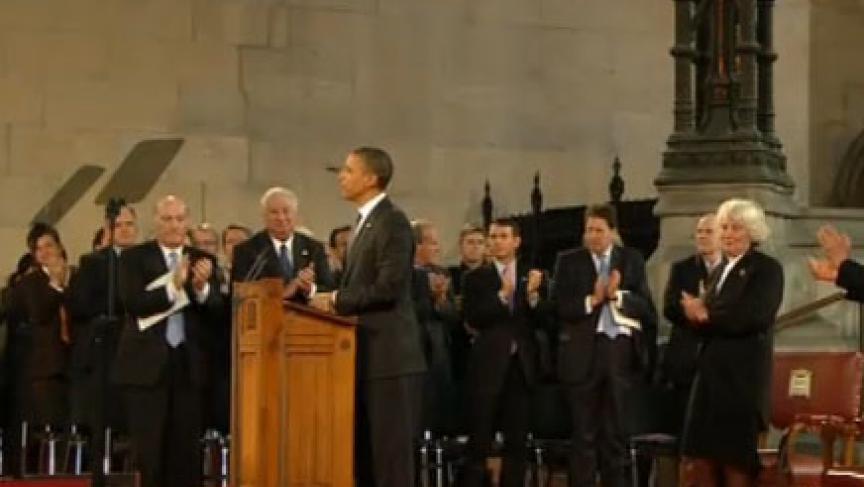 Share
The flourishes and fanfare of tradition continue to surround the state visit of President Obama to the United Kingdom. On Wednesday, he became the first American president to address the British Parliament inside Westminster Hall. The sense of history wasn't lost on the president as he took to the lectern. "I am told that the last three speakers here have been the Pope, her Majesty the Queen, and Nelson Mandela, which is either a very high bar or the beginning of a very funny joke," Obama said. That was it for any light-hearted references. His speech was steeped in history, in recounting Britain as the birthplace of the Magna Carta and the rule of law, principles exported to and embraced by the U.S. He also tried to reassure those who worry that the two countries, and their shared values, are less important in a world that sees China and India rising. "It was the United States, the United Kingdom, and our democratic allies that shaped a world in which new nations could emerge and individuals could thrive," the President said. "And even as more nations take on the responsibilities of global leadership, our alliance will remain indispensable to the goal of a century that is more peaceful, more prosperous and more just." With former Prime Minister Tony Blair looking on from the crowd, the President set out his case for intervening in Libya. Blair has long attracted criticism here for his decision to stand with George W. Bush in invading Iraq. Obama has consistently pointed out the multilateral support for the campaign in Libya. "While we cannot stop every injustice, there are circumstances that cut through our caution, when a leader is threatening to massacre his people, and the international community is calling for action. That is why we stopped a massacre in Libya, and we will not relent until the people of Libya are protected, and the shadow of tyranny is lifted," Obama said. The President's remarks came soon after a joint news conference with current Prime Minister David Cameron, where both men were asked if they are escalating the battle against Muammar Gaddafi. "The President and I agree that we should be turning up the heat in Libya, I believe the pressure is on that regime," said Cameron. And Obama echoed that: "Gaddafi and his regime need to understand that there will not be a let up in the pressure that we are applying." Neither leader provided details, though, of just how he plans to end the stalemate that has seen Gaddafi holding on in Tripoli. There were some quiet rumblings today from British politicians that the U.S. president should have said more, should have committed additional military might to the Libyan campaign. But in the hall, parliamentarians cheered Obama's words, especially as he celebrated the diversity of both nations. "…that it's possible for the former sons and daughters of former colonies to sit here as members of this great parliament. And for the grandson of a Kenyan who served as a cook in the British army to stand before you as President of the United States," he said to applause. After the President finished, many in the crowed rushed forward to shake his hand. It seemed any disappointments or differences over Libya or other issues were forgotten — if only for the moment.