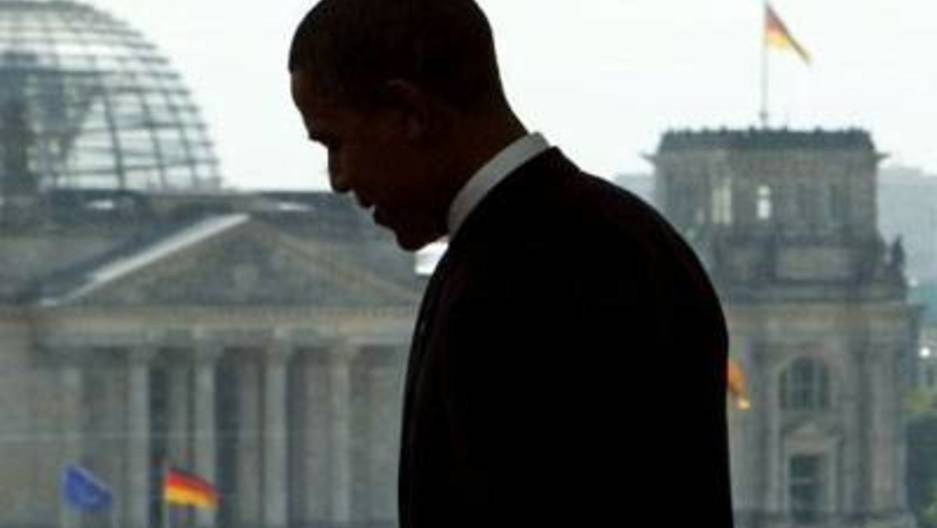 Share
Obama has been warmly received these last few days in the UK but across the channel, in mainland Europe, there is a measure of disappointment and frustration with the American president. Many Europeans expected President Obama would usher in closer relations. The reality has been more ambiguous. Obama himself set the bar high for expectations back in 2008. Consider the wild reception the democratic presidential contender received in a packed square in Berlin. "Partnership and cooperation among nations is not a choice, it is the only way, the one way to protect our common security and advance our common humanity," the President said in his speech, to thunderous applause. Back then Europeans seemed wild about the man, and hopeful that his victory would boost relations that had chilled under President George W. Bush. Why that hasn't exactly happened has been the subject of European debate for years now. Obama himself may have offered clues in his Berlin speech about where his focus might be once president; on security and advancement. For Michael Cox, an international relations expert at the London School of Economics, the word "advance" signaled an emphasis on trade. So Cox said its obvious why Asia has been a priority from the start. And he says the three-year-old global economic crisis hasn't helped Europe's cause. "Europe is in stagnation economically at the moment except for Germany. And that's why it focuses on Asia because that's where the growth is," Cox said. Cox said the U.S. European relationship remains strong, but the U.S. simply sees less urgency in it. "I think what Europe must understand is that today there are no more threats in Europe and so U.S. can be much more relaxed about Europe," he said. What he means is no large, visible threat, like the Soviet Union. But terrorism is high on the transatlantic agenda. European experts say cooperation on that front has always been high. The tension that's arisen has seemed at times more about form than substance. European feathers were ruffled in 2009, when President Obama skipped a long-established U.S.-Europe summit, hosted then by Spain. Spanish government spokesman Jose Antonio Alonso was not pleased. "I think the American government needs to be aware of just what Europe is," he said at the time. "An economic powerhouse and a key actor on the political stage." But at times Americans have questioned that last point. Especially with regard to support for the war in Afghanistan. And now several European countries are planning to cut defense spending as they reign in deficits. That has the U.S. worried about Europe's commitment in several conflicts, including its new lead role in Libya. The French and British are now spearheading that offensive. But despite the political and economic difficulties, on the street Obama the man remains popular; more popular, some polls suggest, than in the United States itself. Miguel Enrique Rodriguez is traveling salesman in Spain. "Obama's much more likeable than his predecessor. He's more humble and that's something we Europeans value." At this week's G8 summit in Deauville France, Obama will have to show firmness as well. On Europe's continuing role in Afghanistan, the Middle East conflict and North Africa, and on overcoming its sovereign debt crisis.