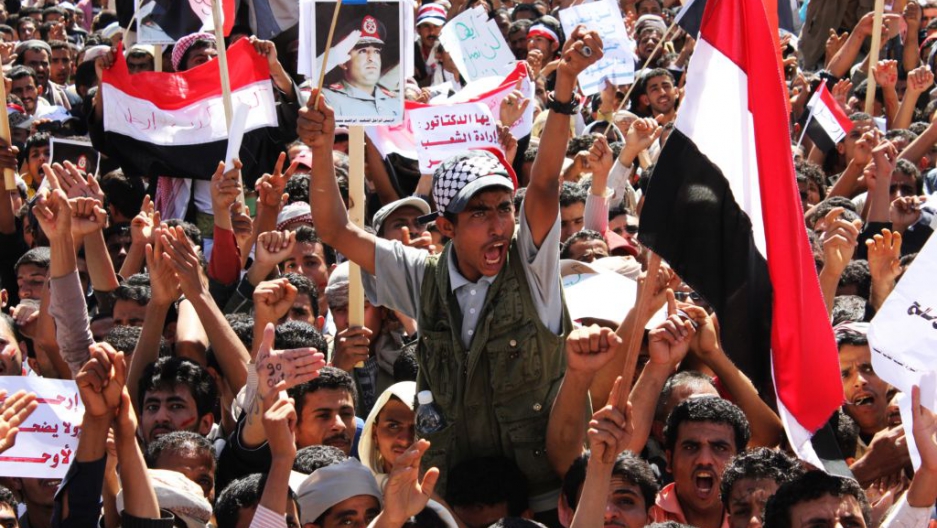 SANAA, Yemen — A mob of gunmen loyal to Yemeni President Ali Abdullah Saleh for hours trapped the American, British and European Union ambassadors, as well as the Secretary General of the Gulf Cooperation Council, inside a diplomatic compound here on Sunday.

Eventually the top diplomats were evacuated by helicopter, according to local reports.

The blockade of the envoys in the United Arab Emirates embassy temporarily disrupted plans to get Saleh to sign an agreement for him to step down from power within 30 days.

Eventually the diplomats flew to the presidential palace and met with Saleh who still refused to sign the document. Instead Saleh watched as a top official of his ruling party signed the agreement, which was reported on state television.

That did not satisfy the influential Gulf Cooperation Council, the regional body that brokered the power transfer deal. Angry that Saleh did not sign the agreement himself, the Gulf council suspended the deal. According to the agreement Saleh would have stepped down from power in return for his immunity.

After 100 days of upheaval, Yemen is left with the prospect of more turmoil and violence. It is estimated that 150 anti-government protesters have been killed.

Earlier Sunday the Saleh loyalists who blockaded the UAE embassy said they were preventing the diplomats from going to the presidential palace to convince Saleh to sign the Gulf council's power transfer deal.

“We don’t want Saleh to leave, we won’t let him sign. That’s why we’re holding them here,” said Ahmed Saleem, one of the Saleh supporters outside the embassy.

Saleh had pledged to sign the agreement on Sunday but later appeared to be backing out, making it the third time he has reneged on a promise to sign the deal. Iit is not clear if the signature of the top party official will validate the agreement.

The Gulf Cooperation Council earlier said it would withdraw from mediating the power transfer if Saleh doesn't sign by the end of Sunday, according to the Associated Press.

Violence broke out near Sanaa’s airport as pro-and anti-government protesters met on the streets.

“We have initial reports that at least one unarmed anti-government protester was killed by Saleh loyalists,” said protest leader Adel al-Surabi.

Eyewitnesses claim that many of the plainclothes gunmen stopped motorists in traffic and brandished their fireams to force people to declare their allegiance to Saleh.

The power transfer accord had already been signed by leading members of Yemen’s political opposition. Leaders of the Joint Meeting Parties (JMP) signed the agreement Saturday night. But on Sunday, Saleh demanded that they sign the agreement in a public event, rejecting anything done “behind closed doors.”

Hours before the opposition signed the agreement, Saleh denounced the Gulf Cooperation Council initiative as “a coup against the constitutional legitimacy and came under western efforts to create a weak regime in the region.” Saleh was speaking to soldiers assembled for Unification Day celebrations.

He also said that the GCC initiative is “purely a plot but we will deal with it positively” accusing the Gulf region countries of financing Yemen's ongoing protests to get Saleh to leave power.

Sunday was the anniversary of the 1990 unification of the northern Yemen Arab Republic and the southern People’s Democratic Republic of Yemen. Saleh touts the unification of North and South Yemen as one of his greatest achievements as head of state and he has traditionally used Unification Day as a show of his force. Saleh usually stands before thousands of soldiers offering him a salute, accompanied by tanks, missiles and fighter jets to commemorate Yemen’s unification.

But this year anti-government protesters took to the streets waving Yemen flags and chanting anti-Saleh slogans to mark the celebration.

“Yemen’s unity is maintained by the people, not the president. Saleh’s empty threats that the country’s unity will be undermined if he leaves office is utterly ridiculous,” said Jamal Nasser, spokesman for the Coordination Council for the Youth Revolution of Change, Yemen’s largest protest organization.

He added: “It’s all a one man show. Saleh’s regime is more like a mob than a government.”