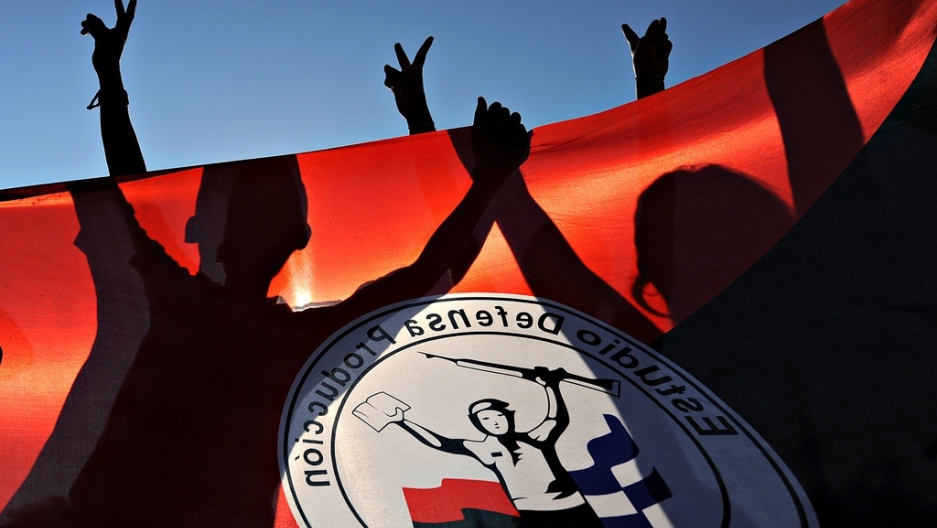 MANAGUA, Nicaragua — Leaders of an international leftist alliance descended on Managua this week to compare revolutionary credentials and strategize their next move in their hemispheric struggle against neoliberalism.

The Sao Paulo Forum is tasked with the ambitious goal of “constructing a new world vision” and holding the line against “the counteroffensive of capitalism.”

But since forming in 1990, the forum has become an increasingly motley crew. At the event registration at the Holiday Inn Managua, radical communists mingled pleasantly with progressive social democrats, and members of anti-establishment opposition groups pressed palms with government leaders who seem very comfortable being the establishment.

“These days it’s hard to identify common policies or even a common ideology among many Latin American leftists. Rather, they share a certain mood and are part of the same club, so they often tend to enjoy each other’s company,” said Michael Shifter, president of the Inter-American Dialogue in Washington, D.C.

Despite the clubhouse camaraderie among leftist leaders, many of whom, Shifter notes, “share some formative experiences,” he says the “leftist label doesn’t mean very much anymore.”

The forum is made up of 80 left-leaning Latin American and Caribbean political parties and social movements. The pow-wow also included a clutch of other international leftist invitees, from Vietnamese Communists and Spanish socialists, to Libyan diplomats and Palestinian activists.

While some claim the leftist label might not mean much anymore, many in Latin America still feel the distinction is important enough to trek to Managua from points all across the hemisphere.

“We are different from traditional, right-wing parties that are led by the oligarchy, the rich and the corrupt who maintain power in the top-down manner,” said Alejandro Torro, a youth organizer for Colombia’s leftwing Polo Democratico Alternativo.

Still, when it comes to indentifying themselves, even the participants at this week’s conference have a hard time agreeing on a common definition.

“I don’t identify as a leftist. I identify as a fighter who defends the disenfranchised classes — the farmers, the students, the housewives, those indebted to banks. They are all victims of the system,” said Manuel Cortez, a 68-year-old Chilean socialist and founder of the Salvador Allende Brigade.

Cortez criticizes many on the left — including the Socialist Party in his own country and others in attendance at the Sao Paulo Forum — of being corrupted by power, out of touch with those whose interests they claim to represent, and complacent about capitalism. “Socialism is a process and it’s a very big word,” Cortez said. “The model is not yet defined in Latin America.”

While the left may not be easy to pigeon-hole, it has indisputably gained important ground in Latin America and the Caribbean over the past decade. With the exception of last year’s electoral loss to the “new right” government of Sebastian Pinera in Chile, the Sao Paulo Forum is now represented by 11 governments in the region: Cuba, Venezuela, Nicaragua, El Salvador, Brazil, Ecuador, Bolivia, Uruguay, Paraguay, Argentina and the Dominican Republic.

Only seven countries in Latin America are now led by governments that identify as center-right, while a few others — such as Peru and Guatemala — are up for grabs in upcoming elections.

For many at the Sao Paulo Forum, diversity is something to be celebrated as a key to the left’s multiple successes in a multifarious part of the world.

Cuban Communist Party representative Ricardo Alarcon, president of Cuba’s Parliament, compares socialism in Latin America to a rainbow that has appeared after the storms of dictatorship and neoliberalism have passed. “And, like all rainbows, it has to be multicolor,” Alarcon said. “It is not a socialism that is dogmatic or monochromatic, but one that is diverse with all the richness and color that our people and cultures are capable of giving.”

Still, all that diversity is also causing a bit of a power tussle and identity crisis within Latin America’s left.

The Sao Paulo Forum’s working group released a document in preparation for this week’s meeting in Managua acknowledging mutual “jealousies” between the old-school and new-school left. The document criticized the old-guard for being “sectarian,” “intolerant” and “immature” in the face of profound “social transformations that are occurring in each country.”

The transformations are affecting everyone. As the “new right” continues to adopt social policies traditionally identified with the leftist politics, and left-wing governments adjust to the rules of a globalized capitalist market, the line between the two has become increasingly blurred.

Arturo Cruz Jr., a professor of political science at Managua’s INCAE business school, said in practice there’s not a lot of difference between social democratic parties on the left and liberal progressive parties on the right.

“The left-right dichotomy has been whittling away for some time now; there is an emerging consensus in Latin America that the state has a fundamental role to play, and so does the market,” Cruz said.

Cruz, a former ambassador for the Sandinista government, said this can been seen in countries such as Nicaragua, a government he places on the political spectrum under the heading “responsible populism.” Cruz notes that the Ortega government advertises revolutionary socialist change yet dutifully remains within the framework of the IMF program and prides itself on macroeconomic stability — the right’s former badge of honor.

Indeed, many Sandinista businessmen have become so good at capitalism that they are now included on the rosters of Nicaragua’s growing club of millionaires, even though their continued employment of revolutionary rhetoric seems to suggest a lingering nostalgia for the ideological formation of their youth.

The left-right blur is not just happening in Latin America, but around the world, notes U.S. intellectual Noam Chomsky, whose writings and opinions are often claimed by Latin America’s left.

“It’s the same elsewhere,” Chomsky wrote to GlobalPost in an email. “In Europe, for example, it's often the new right that takes up social and economic issues important to working people.”

Curiously enough, Cruz said, one of the few places in the Americas where the left-right divide seems to be growing is in the United States. “This is a switch,” he said. “While Latin American political parties are moving towards the center, the U.S. is becoming more polarized.”