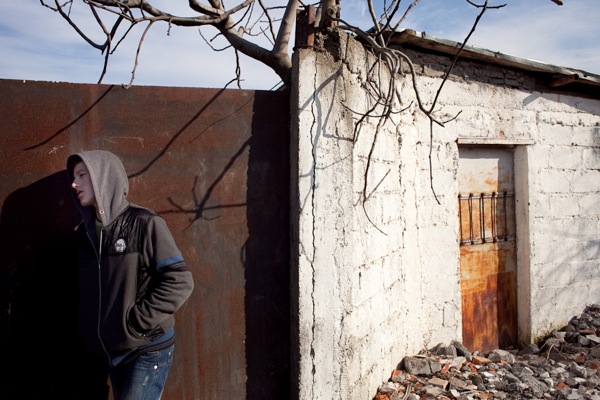 The jagged mountains of northern Albania have kept the locals relatively free from state control for centuries. The mountains have also helped preserve ancient traditions like the kanun. We’re traveling with mediator Pashk Lleshi from the National Reconciliation Committee.

"The kanun is not enforced properly,” Lleshi says. “The kanun was the constitution and the penal code of its time. It was the main legal instrument which prevented people from killing each other. The kanun doesn’t say you can kill a woman or a child. It doesn’t say you can kill for a piece of land or an offensive word. To the contrary, it contains the foundation for reconciliation between families in conflict."

The kanun was a set of traditional rules about all aspects of daily life adopted in the 15th century. But Lleshi says these days people often misuse the kanun to justify all kinds of criminal revenge. Today he’s trying to unravel a complex conflict involving the 1997 shooting deaths of two innocent bystanders.

The mediation process seems mainly made up of chatting over coffee and cigarettes. We stop in a café to meet Mark Zeff Llesh, the cousin of one of the victims.

"The families of the victims have adopted a very humane attitude toward the family of the killer," Llesh says. "We haven’t been stalking them or pursing them. We have showed an exceptionally high level of endurance and patience in the face of the violence and disgrace that befell our family on the street."

Our next stop is the house of the killer Ndue Gjonkolaj, currently serving 25 years in prison. We’re let into the front yard by one of Gjonkolaj’s sons. According to Albanian tradition, the oldest man of the house should greet us before we enter. So we wait with mediator Lleshi for the oldest son to return.

"We have been to the victim’s family's house before but this is our first time here,” Lleshi says. “This back and forth communication is going to continue for some time, until we can have them all sit down together, shake hands and have a coffee together."

When the son returns, we are welcomed into the house. Inside, the family greets us formally, standing in a line. Wife Dila Gjonkolaj is dressed in black out of respect for those killed by her husband. She says the tragedy all started because of a dispute over the sale of some lumber.

"They started to argue," she says. "They offended each other with curses and insults. And then in the end, three men grabbed my husband by the throat. They got out of the car and reached for their guns and started shooting at each other. Both sides were spared their own bullets and two bystanders were killed unintentionally."

13 years later, she feels the time has come for reconciliation. Her family has spent years asking for forgiveness through envoys and respecting the honor of the victims families by mourning and avoiding any possible contact.

"For two years after the killing, I didn’t leave the house except for very rare occasions when I was escorted,” Gjonkolaj says. “It’s not because I was threatened, but out of respect for the victims’ families. My eldest son at the time was 13, he didn’t set foot off the family compound for four years. He quit going to school in the eighth grade."

While Gjonkolaj says her family still hasn’t been threatened all these years later, they are still afraid. They still haven’t gotten a besa, or reprieve from the victims' relatives. So it's understood that a male member of her family could be killed anytime he steps out of the house.

The job of mediator Lleshi seems to be leading an endless series of informal chats. Reconciliation depends on men willing to talk and lots of coffee and rakia, a strong homemade grape brandy. The victims' friends and relatives gathered here say the main holdout in this blood feud is Tonin, the brother of one of the victims.

"The kanun values more the one that forgives than the one who avenges with blood," says Ndue Nikolli, a friend of one of the victims. "The rifle of he who forgives is more valuable than the rifle of one who has used it to kill."

The talk becomes more Shakespearean, as the men drink more and discuss justice, forgiveness and the honor of the dead.

"Tonin for the moment doesn’t want to see anyone regarding this issue,” says Pjeter Frroku, a cousin of one of the victims. “Our job is to try, but the final word is his."

The drama of the kanun and blood feuds has formed the plot of feature films and proves difficult to unravel. Albanians want to move beyond the cliché of a primitive people obsessed with blood and revenge. The Gjonkolajs hope their real world horror story comes to an end.