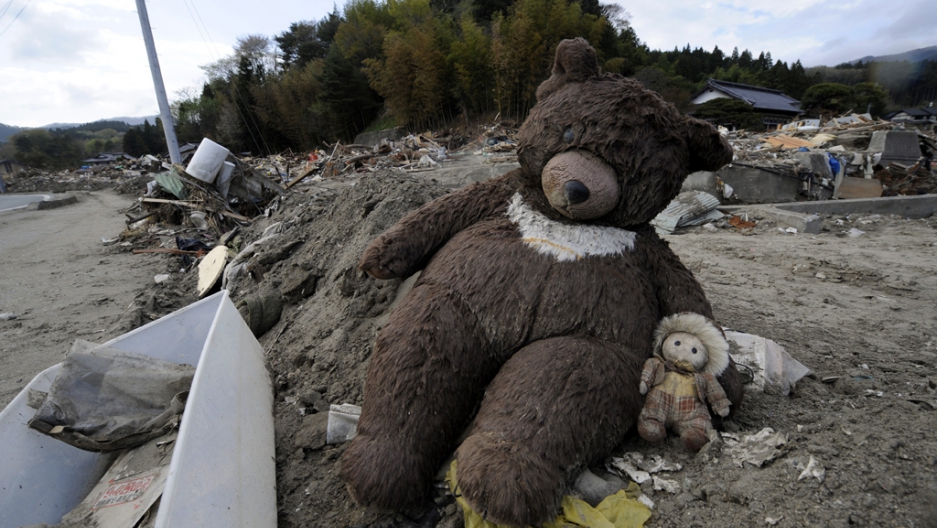 A teddy bear and a doll found in the debris sit at the side of a road in the tsunami-devastated city of Rikuzentakata, Iwate prefecture on May 7, 2011.
Credit: Toshifumi Kitamura
Share

TOKYO, Japan — Given recent events in Fukushima, it should come as no surprise that Japan's love affair with nuclear power has turned sour.

Yet even as work continued to stabilize the stricken Fukushima Dai-ichi power plant weeks after the country's northeast coast was hit by a tsunami, the official emphasis was on safety improvements, not abandonment.

That was until Japan's beleaguered prime minister, Naoto Kan, announced two major policy shifts that, while not spelling the end of nuclear power, will dramatically reduce its role in providing energy to the world's third-biggest economy.

Japan's 54 reactors provide 30 percent of its electricity, and there were plans to increase that number to 50 percent by 2030. Policymakers now accept that goal is impossible in light of the Fukushima crisis, the world's most serious nuclear accident since Chernobyl. Instead, plans for 14 new plants, which would have taken Japan's reliance on nuclear to over 50 percent, have been effectively scrapped.

"We need to start from scratch," Kan said. "We need to make nuclear energy safer and do more to promote renewable energy."

But Kan's nuclear disaffection only goes so far. He has made it clear that nuclear should be a part of Japan's energy mix, accompanied by safety improvements and more investment in renewable and natural energy.

At Fukushima Dai-ichi, there are causes for optimism and concern. Workers this week re-entered the plant's No. 1 reactor after radiation levels dropped, but adjustments to water gauges revealed worrying news about the state of the unit's fuel rods.

The plant's operator, TEPCO, said the rods had sustained more damage than previously thought, adding to concerns that the nuclear crisis could drag on for more than the six to nine months the firm said it needed to bring it under control.

The utility said that melted nuclear fuel had created holes at the bottom of the No. 1 reactor's pressure vessel, after confirming that water levels inside the troubled reactor were not high enough to cover the fuel rods.

But it added that the fuel, which is thought to have been fully exposed after the March 11 disaster, was being kept cool by water being injected into the water pressure vessel from outside.

As workers continue to surmise the damage done to fuel assemblies in three of Fukushima Dai-ichi's six reactors, Japan has been set on a new energy course that, for the first time in its postwar history, sees a reduced role for nuclear power.

That policy shift came after the government ordered the temporary closure of the Hamaoka nuclear plant, considered the country's most vulnerable nuclear facility because it sits directly above an active seismic fault line in a region where seismologists say there is an 87 percent chance of a powerful earthquake striking in the next 30 years.

The facility will remain shut while a 50-foot wall is built to protect it from a massive tsunami of the kind that knocked out vital cooling systems in Fukushima Dai-ichi's reactors — a job that could take up to three years.

Some experts believe the crisis has exposed the administrative malaise at the heart of Japan's nuclear industry, quite apart from its obvious threats to the health of those living near atomic complexes.

Tetsunari Iida, executive director of the Institute for Sustainable Energy, says the traditionally close ties between the nuclear industry, politicians and safety agencies — what he calls Japan's "nuclear village" — have hidden the true costs of atomic power plants.

"On the outside we are told it's very safe and cheap, but inside it's rubbish," he said. "That's the nature of the Japanese nuclear community."

The reality of Japan's nuclear program, according to Iida, comprises aging plants and the perennial problem of how to safely dispose of spent fuel.

"Renewables are becoming the reality," he said. "Even if in Japan solar and wind power are more expensive, nuclear needs higher safety standards and much higher liability coverage. And we have yet to come up with an answer to the question of where to store waste."

But Keiji Miyazaki, professor emeritus at Osaka University and a specialist in the study of severe accidents, said renewables did not represent an energy panacea.

"Nuclear power is indispensable for Japanese industry and for solving the energy growth and environmental protection," he said.

The Japanese public is divided. According to a recent poll, 40 percent of respondents said that the nation's dependence on nuclear power was unavoidable, while 41 percent supported a cut in the number of plants. Only 13 percent said the industry should be shut down altogether.

The Asahi Shimbun captured the public mood when it said: "The nuclear disaster triggered [by the earthquake] has completely destroyed public confidence in both the safety and cost effectiveness of nuclear power generation."

The newspaper welcomed attempts "to curb the predicted growth in electricity consumption that was used by the government as the main reason for promoting nuclear power generation. Saving electricity is an effective way to reduce Japan's dependence on nuclear power."

Even if TEPCO achieves cold shutdown by early next year, it could be years before the 41-year-old Fukushima Dai-ichi plant is decommissioned. Before then, the firm must also decide how to safely dispose of tons of contaminated water used to cool overheating reactors.

While deaths from radiation exposure have so far been avoided, the human cost of the crisis is weighing heavy on TEPCO and the government. About 80,000 people living within a 12-mile radius have been forced to evacuate their homes and have yet to be given an indication of when they can return permanently.

Farmers and fishermen who have seen their businesses ruined say TEPCO and the government are not doing enough to help them.

For its role at the center of the crisis, TEPCO has encountered widespread opprobrium and now faces a compensation bill that could run into tens of billions of dollars.

On Friday, the government approved a compensation plan that involves the issuance of special-purpose bonds by the state, annual premiums from TEPCO and contributions by other electric utilities that operate nuclear plants.

Controversially, the government's top spokesman, Yukio Edano, called on TEPCO's lenders to waive debts to give the utility a fighting chance of meeting its compensation targets.

In return the utility, which has seen its market value plummet 77 percent since the disaster, has accepted there will be no upper limit on damages. It must also cut costs and open its management up to greater scrutiny.

The compensation plan may have secured TEPCO's survival as a listed company, the future of Japan's energy policy rests on a continuation of the power frugality of recent weeks as well as more diverse energy sources.

The key, say observers, lies in promoting clever energy use, not just in diversifying energy sources. They point to the recent success of energy-saving measures by businesses and households in Tokyo — moves as simple as switching off escalators and revolving doors — which have enabled utilities to lower the peak-time cut in power usage this summer from up to 25 percent to 15 percent below normal demand.

The months ahead, when most of the country is blanketed in stultifying humidity and air conditioners are left on to work their magic, should prove whether or not Japan is up to the job.