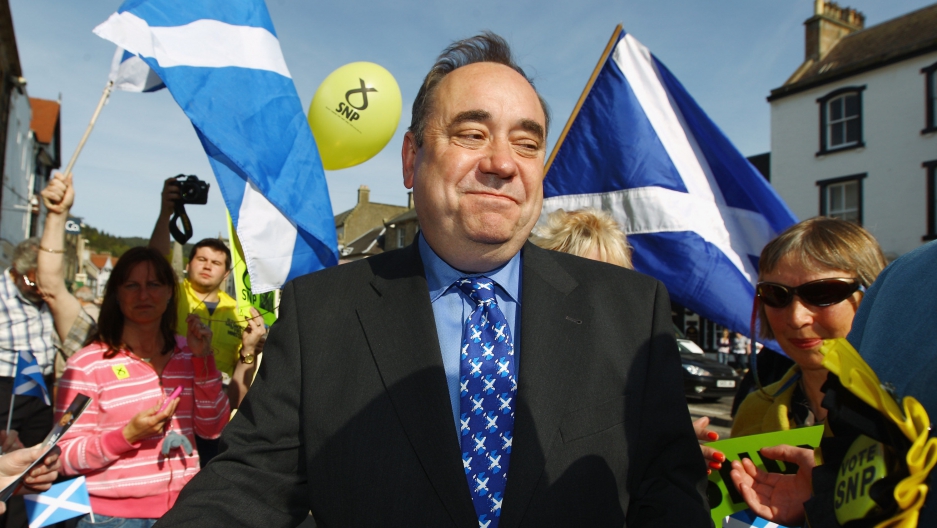 Scottish National Party leader Alex Salmond during the campaign for Scottish parliament on May 4, 2011 in Peebles, Scotland. Behind him, supporters wave the Scottish flag.
Credit: Jeff J. Mitchell
Share

EDINBURGH, Scotland — Britons celebrated the wedding of Prince William to Catherine Middleton by hanging out the Union Jack, from the cliffs of Dover to the Scottish highlands. A week later, the Scottish electorate threatened to make the famous tri-colored flag obsolete.

The flag dates from the 17th century, when the St. Andrew's cross was merged with the St. George's cross to symbolize the royal union of England and Scotland as King James I, a Scot, ascended to the English throne. The St. Patrick's cross was added in the 19th century after the Kingdoms of Great Britain and Ireland merged.

But Scotland's election of a nationalist government last week could undo the United Kingdom.

When in 1997 Tony Blair's Labour government devolved governing responsibilities to Scotland's parliament for the first time in 300 years, it thought the proportional voting system it had devised would neutralize the threat of the Scottish National Party (SNP), keeping it from gaining the overall majority required to claim a mandate for independence.

It worked for a while, delivering first a coalition and then, in 2007, a minority SNP government. But over the past four years the nationalists, under their charismatic leader Alex Salmond, have handled power competently and tempered their leftist leanings. At the same time, senior Labour politicians have given the impression they regard the Scottish parliament in Edinburgh as the poor relation of its London equivalent. At a rally in Glasgow at the start of the election campaign, London-based Labour leader Ed Miliband announced that victory in Scotland would be “the first step to returning the party to power in Westminster.” Scots did not take kindly to their parliament being regarded as a mere staging post.

With the third-party Liberal Democrats deeply unpopular for entering into coalition in London with British Prime Minister David Cameron’s Conservative Party, which has little support in Scotland, the SNP won a nine-seat majority May 5.

It was a stunning result and Salmond — disparagingly dubbed “El Presidente” by Cameron — delivered a typically presidential victory speech in which he promised to stage an independence referendum in the second half of his five-year term.

“Scotland has chosen to believe in itself,” he announced. “We’ve given ourselves permission to be bold.”

His justice minister Kenny MacAskill was more direct, announcing: “It is time for Scotland to take responsibility and become a nation once again.”

It is difficult to overstate the impact secession could have. Britain only began to impose itself on the world after England and Scotland signed the Treaty of Union in 1707, which created the United Kingdom of Great Britain, a political follow-up to the union of the crowns a century before. Today the two countries share a seat on the United Nations Security Council, armed forces, the BBC and membership of the European Union. All that could change should Scotland decide to secede.

The SNP says it would consider abandoning the British Pound and joining the Euro, raising the prospect of different currencies either side of the border.

The Queen would remain head of state, but Scotland could diverge from England in international affairs. Salmond strongly opposed the Iraq War and would be unlikely to pursue an interventionist foreign policy. Without Scottish troops and bases, Cameron and his successors in London may no longer have the resources to do so.

But independence is not yet inevitable. Many people voted SNP on May 5 because they believe the party will fight hardest for their interests and provide the most effective government, not necessarily because they support secession. Assessing the election result, Glasgow’s influential Herald newspaper concluded: “The Scottish people have not said Yes to independence. What has been said, it could be argued, is a resounding Maybe.”

There is also a possibility that Salmond’s pledges of free university education and tax freezes will prove unaffordable and undermine his reputation for responsible financial management. 2011 could be as good as it gets for the SNP.

Nevertheless, the alarm bells are ringing in London. Within days of the election the British government promised to grant the Edinburgh parliament more borrowing powers in the hope that greater devolution will persuade Scots there is no need to take a chance on independence. Cameron also appears to realise there is an urgent need to champion the union and tap into the sense of Britishness engendered by the royal wedding.

“If they want to hold a referendum I will campaign to keep our United Kingdom together with every single fiber I have,” he pledged.

The Battle for Britain is about to begin.