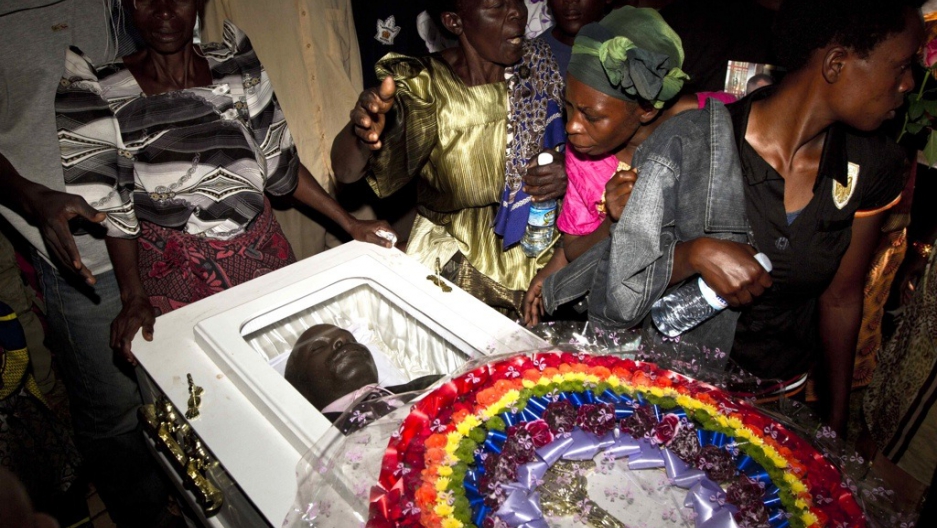 Uganda's parliament shelved its notorious anti-gay bill on May 13, 2011. Here members of the Ugandan gay community attend the funeral of murdered gay activist David Kato on January 28, 2011. Although the police claimed Kato's killing was the result of a petty robbery, many members of the gay and the human rights community charge the murder was a hate crime, a result of the climate of intolerance toward gays that grew because of the anti-homosexuality bill.
Credit: Marc Hofer
Share

KAMPALA, Uganda — Tired but elated, Kasha Jacqueline Nabagesera, a whip-thin 30-year old Ugandan with long braids and a man’s shirt, smoked cigarettes and rested at her bar in a Kampala suburb. She had named the place Sappho, after the Greek poet and lesbian icon, and that night there would be a party.

More than 18-months of struggle, fear, threats, the murder of one of her closest friends, and the hatred of politicians and religious leaders, Nabagesera felt she could finally breath again.

“Today is a victory for gay people in Uganda and for the whole world. The bill is dead,” she said.

Ugandan lawmakers on Friday failed to debate a new anti-gay law, proposed by an ambitious evangelical Member of Parliament, that calls for the death penalty for some homosexual acts.

Homosexual acts are already illegal in Uganda — and in many other African countries — but David Bahati’s draft law would have meant the death sentence for teenagers who have gay sex, or people with HIV/AIDS, or with someone who is disabled, or for being what the bill termed “a serial offender.”

Gay sex between consenting adults would earn a life sentence. The law also called for prison sentences for those promoting homosexuality — which could be interpreted to mean any human rights groups — and for anyone failing to report a homosexual act to the authorities.

“When I moved this bill I had two objectives,” said Bahati, standing outside the parliament building hours after his bill had been shelved.

“One, to make the issue of homosexuality and the dangers to our society part of the national debate, and second, to have the legal framework to protect our children from recruitment and promotion,” he said, referring to the belief, widespread in Uganda, that homosexuals want to brainwash children into becoming like them.

Nabagesera, a gay rights activist whose work with "Freedom and Roam Uganda" earned her this year’s international Martin Ennals prize for human rights defenders, is dismissive of Bahati’s justifications.

“Why would homosexuals recruit children? Why would I recruit a child? No one recruited me into homosexuality,” she said.

That is exactly what a new Ugandan tabloid, called Rolling Stone, screamed on its front page earlier this year: “Hang them!” it read alongside personal details — and in some cases photographs — of allegedly gay Ugandans.

Among those identified was 40-year-old Peter (not his real name). “It was tough, there was a lot of fear then,” he said.

That fear of exposure, or of attacks, became real in January when David Kato, one of the few gay Ugandans who, like Nabagasera, speak publicly about being gay, was beaten to death in his home.

The Ugandan government quickly announced that his killing was not a hate crime but a violent robbery. Too quickly, some say.

“David’s murder scared people. I don’t know what really happened,” Peter said with a shake of his head. “All I know is David is dead.”

“I lost not only a colleague but a dear, dear, close friend of mine. At the funeral sorrow turned into anger when the priest stood up and condemned David in his coffin. We stood up for David who had stood up for our community,” she said.

Despite Kato's death and the daily threats, which included threats of "corrective rape" — the idea that the rape of a lesbian by a man will "cure" her — Nabagesera has continued her struggle on behalf of Uganda’s gay community.

“It’s not easy. It’s a big sacrifice to be on the frontline.”

Friday’s shelving of Bahati’s anti-homosexuality bill is a victory for Uganda’s hidden gay community, but it is not the end of the anti-gay legislation.

Speaking to GlobalPost, Bahati insisted he will propose similar legislation.

“In the next parliament I will be moving forward to ensure we have a law to stop recruitment and promotion [of homosexuality],” he said.

Bahati said that the death penalty would be removed from the new version of the bill but added, “This is not the end … we have just pressed a pause button but in a few days from now, when the next parliament starts, we will press the play button again.”

Nabagesera, planning the evening’s celebrations, refused to be dismayed by the news that Bahati would fight on.

“It is his right to reintroduce the bill but just as we have ensured the bill did not pass in this Parliament we will do the same in the next,” she said. “The fight has just started.”