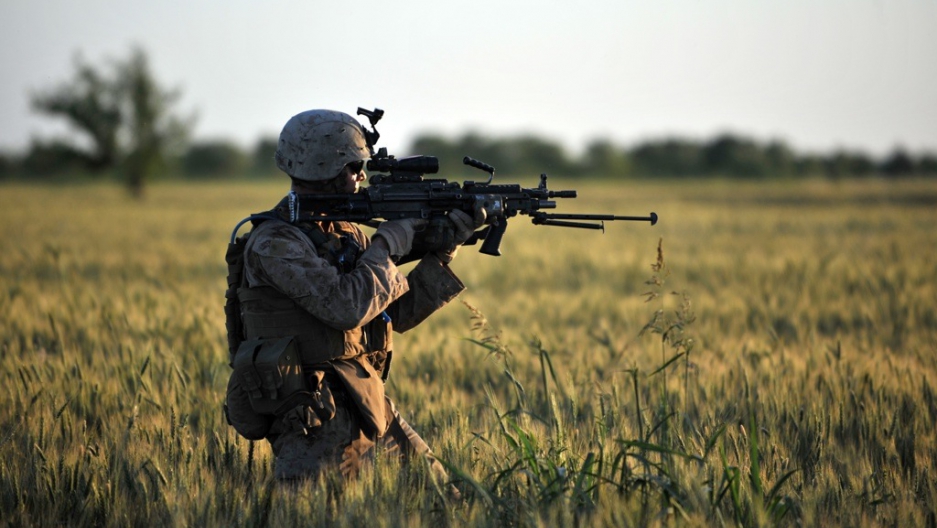 A US Marine gets ready to open fire in Helmand Province on May 7, 2011.
Credit: Bay Ismoyo
Share

KABUL, Afghanistan — The millions of dollars now being sunk into the training and equipping of Afghan National Security Forces (ANSF) may actually be creating an even bigger hazard to civilians in Afghanistan, according to a report just released by Oxfam, the prominent London-based charity.

The report, titled “No Time to Lose,” outlines the dangers posed to peace and security in Afghanistan by the poorly trained, inadequately supervised and often completely unaccountable army soldiers, police officers and militia members now being churned out in their thousands by international trainers.

Last year was the most violent so far in a war that is now in its 10th year: In 2010, according to official figures, 2,777 civilians were killed — the highest number since 2001.

“At least 10 percent of Afghan civilians killed in the conflict in 2010 were killed by their own security forces,” the authors said. “But civilian casualty statistics do not convey the full extent of harm caused to the civilian population by the ANSF. Human rights organizations have documented a series of alleged violations of human rights and humanitarian law on the part of the national security forces, including night raids carried out without adequate precautions to protect civilians, the recruitment and sexual abuse of children, mistreatment during detention and the killing and abuse of civilians by local police seen by many communities as criminal gangs.”

Afghans are supposed to be assuming full control of their own security by 2014, according to agreements reached at the Lisbon Conference in November.

The renewed emphasis on Afghan security forces corresponds closely with the desire by many nations in the International Security Assistance Force (ISAF) to extricate themselves from what is becoming an increasingly unpopular war.

The killing of Osama bin Laden on May 2 has given a boost to the assessment of the war by the American public. While almost two-thirds of respondents in a previous poll said the war was not worth fighting, a new survey conducted just after the raid on bin Laden’s compound showed that more than half had a positive opinion of the war effort.

But concurrent with the shouts of joy at the demise of bin Laden were demands to “bring the boys home.”

With an election year coming up, and U.S. President Barack Obama under pressure to make good on his 2009 promise to start withdrawing troops in July of this year, the push is on to increase the numbers and capabilities of the Afghan security forces.

The haste with which the effort is proceeding, however, is hindering the overall development of the Afghan forces, according to the report.

Nowhere is this lack of accountability more obvious than in the Afghan Local Police (ALP), a pet project of the U.S. Special Forces that purports to train local residents to fight the insurgency and protect their communities. The ALP received glowing accolades from the U.S. military, and is credited with creating “security bubbles” in several locations.

The Oxfam authors would dispute that characterization, however. Given just three weeks training and then set loose with a gun and the blessing of the provincial government, such groups, they say, are often little more than criminal gangs.

The theory is that the recruits for the ALP will be proposed and vetted by local councils, or shuras. Any problems with the ALP will also be dealt with at the shura level — community elders will handle discipline and oversight.

But in many cases this is unrealistic, said Lawrence Devlin, of the Peace Training and Research Organization, which carried out much of the fieldwork for the report.

“It takes a strong shura to stand up to armed men,” he said.

“The government is in some cases legitimizing local militias by providing them with badges,” Devlin added. “Our data suggests that local people are not very happy with these individuals.”

The ALP has gone through several incarnations over the years. The pilot project was called the Afghan Public Protection Program, or AP3 for short. Wardak province, which nestles up against the capital, Kabul, was chosen for the initial trials. After two years and several million dollars, the plan was abandoned — in part because the AP3 came under the control of a local commander, who was using the force to further his own goals.

“Wardak is a classic example of how a resource (like the AP3) can be captured by local powerbrokers,” Devlin said.

Over the past few years, the AP3 has given way to the Community Defense Initiative, Village Defense Platforms, and finally, the Afghan Local Police.

The ALP theoretically operates under the control of the Ministry of the Interior, which is supposed to make the program more accountable and subject to discipline.

But in fact, say those involved in the report, this has not been the case.

“If all the theory is followed, then having the ALP under the Ministry of the Interior should improve accountability,” said Rebecca Barber, Oxfam’s policy and advocacy adviser and the primary author of the report. “But in fact they have inadequate training … there are enormous problems with the ALP.”

With international support waning and a growing sense that it may be time to leave, it is important to have Afghan forces able to assume control.

The U.S. military has been firm in its insistence that their proteges will be ready when the time comes.

Lt. Gen. William Caldwell, who assumed command of the NATO Training Mission Afghanistan in 2009, told a press briefing in London in April that the Afghans would be prepared to take the lead by the target date of December 2014.

Both Barber and Devlin, however, said that the military’s own assessments often do not correspond to reality.

“We have met with the RC’s (military Regional Commands), but they have not been even remotely candid,” Devlin said.

“We have asked the military for their data (on the ALP),” she said, “But we have not received a satisfactory response. We are asking for an independent assessment that could produce a report. This needs to be put in place before there is any expansion.”

“We would see enormous problems if the ALP were to reach (the higher figure),” Barber said.

The problems with training the regular Afghan security forces, the ANSF, are admittedly daunting: Only 14 percent of all army and police recruits are literate at present, and attrition rates are high.

“There is concern that the regular ANSF do not have the necessary strength or the resources (to take over),” Barber said.

This may account for the increasing reliance on the ALP, with their truncated training and minimal supervision.

“It is certainly cheaper (to produce ALP forces),” Barber acknowledged. “It’s a quick and dirty method of boosting numbers.”

There is also, Devline said, an “uncomfortable conjoining” of the ALP with the government’s reintegration program, which is generously supported by the United States and other international stakeholders, and designed to bring back into the fold those Taliban fighters who are prepared to lay down their weapons.

But rather than abandon the fight, they are often conscripted directly into the ALP, Devlin said.

“I have seen places where the re-integrees are just lined up and taken into the ALP,” he said.

The Oxfam report makes several recommendations regarding the ANSF, mostly having to do with improved oversight and accountability. But when it comes to the ALP, they are more categorical: they are calling for the program to be suspended until some of the kinks can be worked out.

This is a softening of Oxfam’s position in earlier reports, when it called for ALP and programs like it to be stopped altogether.

This is not reflective of an improvement in the ALP, just recognition on Oxfam’s part that ALP has its own momentum at this point, and cannot be abandoned.

“The United States has invested so much that there was no point in making an unrealistic recommendation,” Barber said.

“The possibility of closing down (ALP) just does not exist,” he said. He was not advocating a blanket shutdown at this point, he added.

“Until the process becomes more accountable and transparent we cannot tell whether the ALP can work in some areas of Afghanistan,” he said. “But at this stage, the future looks bleak.”