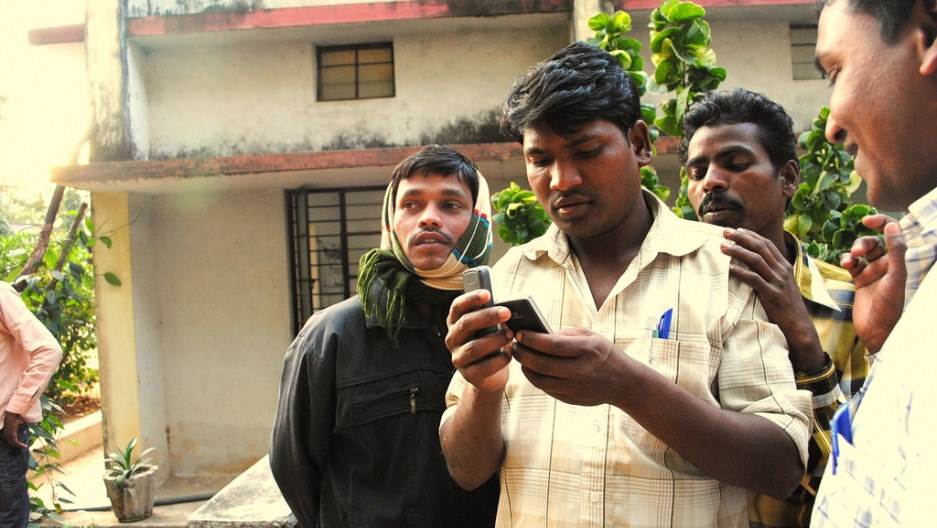 Newspapers are allowed, and so are television stations. But those media reach mainly the rich. For the bulk of India's more than 1 billion people, radio is all they have.

Restricting radio, then, is a powerful way to keep information from the masses.

"We call ourselves the world's biggest democracy," said Shubhranshu Choudhary, formerly a producer with the BBC. "[But the ban on news radio] tells a lot about our country. It's a democracy for the rich."

Last year, Choudhary set out to change that.

He launched the world's first mobile phone-based radio news network in Chhattisgarh, a remote state in the middle of India at the center of the battle against Maoist insurgents.

His network, CG Net Swara (Voice of Chhattisgarh), offers audio broadcasts in the guise of "messages" to listeners who call into a central server.

Some say that in the age of the smart phones and the internet, those laws are becoming outdated.

Until 2006, when the government began allowing commercial FM stations and community radio, state-owned All India Radio enjoyed a monopoly on the dial — its only competition coming from international shortwave broadcasts from the BBC and Voice of America.

Today, pioneers like Thane Richard — a 23-year-old American from Bozeman, Mont., who hopes to turn Mumbai-based Dabba Radio into India's NPR — are introducing internet radio to the market.

Richard has developed a show made by residents of Dharavi, Asia's largest slum, designed to tell their stories to the rest of India. The station is working with Boston-based former NPR host Chris Lydon on an international chat show intended to be a meeting of the minds between the two democracies.

Even though internet penetration remains low — according to the Internet and Mobile Association of India, internet penetration is just 24 percent in urban India, which accounts for about a quarter of the population, and fewer than 1 percent of rural Indians — Richard says that smart phones and technical solutions that can push voice messages out to simpler mobile phones are fast making a conventional broadcast license obsolete.

"We don't have standard FM, but I'm not worried about that," Richard said. "Internet is growing and we're working on getting up on cell phones. So that can be overcome."

And by harnessing the power of information to mobilize listeners these grassroots radio stations — some 111 in all, according to the Commonwealth Educational Media Centre for Asia — have already made an impact.

Using call-in shows, radio plays and even folk songs to skirt the ban on outright news, local stations have exposed corrupt practices and drawn national media attention to issues that vested interests had prevented from coming to light.

"The thing is that news is undefined, so the government is opposing anything in a news format, with a news reader saying this happened today or that happened today," said 29-year-old Aaditeshwar Seth, whose free, open-source Grameen Radio Internetworking System software makes it easy to get a station up and running.

So far, though, no conventional community radio station has harnessed the power of citizen journalists as effectively as Choudhary's CG Net Swara, which allows users to call into the system and record or listen to voicemail "broadcasts."

For the last 18 months, the network has broken numerous stories of human rights violations in India's jungle war against the Maoists, including the alleged burning of some 300 villagers' homes by the government's paramilitary forces in March.

"Chhattisgarh was a complete black hole [as far as news]," said Choudhary, who started the network with a Knight International Journalism Fellowship. "Nothing came out of that place. Almost all the human rights violations of the last five years, this citizen journalism platform has played a big role in getting that out."

Choudhary calls the mobile phone "the most democratic tool" for gathering and disseminating news.

He aims to link tribes like the Gonds, spread across three states, to a single news portal focused on issues they define themselves. That's something he could never accomplish with a conventional community radio license — partly because a government monopoly keeps broadcasting equipment prices artificially high and partly because regulations limit the reach of community stations to a range of 15 kilometers (9 miles).

But his mobile network also has limitations.

It still costs users money to call in and listen to broadcasts, and even though some 70 percent of Indians now have mobile phones, many of the remote poor who are his target audience still do not.

Choudhary is already plotting solutions for that problem, however.

"What we are suggesting is a mixture or a linkage between internet, radio and mobile phone: a voice-based platform where news gathering happens through mobile phone," he said.

"Then in the middle the internet connects one to many on the phone, and thirdly that population without mobile phones has to be served by a short-wave radio station, because it has to have reach."

Of course, for now, despite India's cherished freedom of speech, a station like the one Choudhary describes would have to be hosted in Nepal, perhaps, or Sri Lanka.

Opening it in India would make him a criminal.