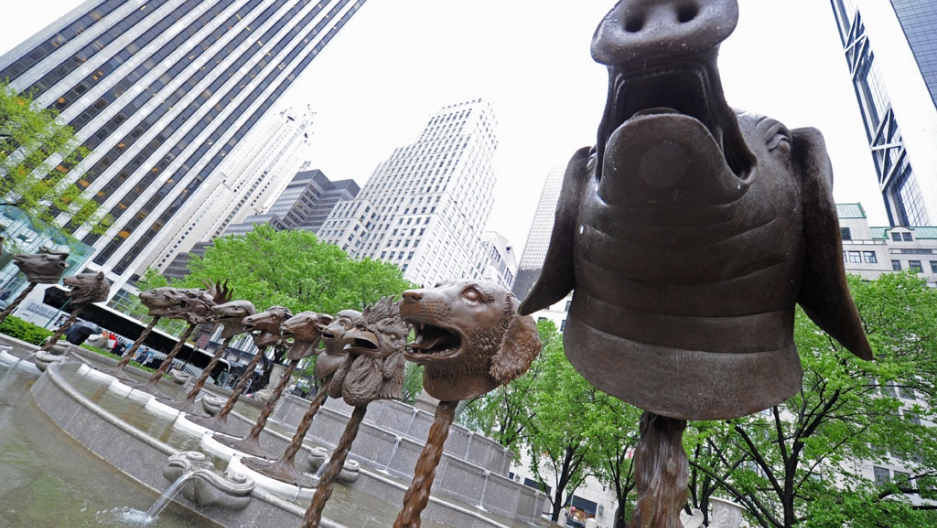 "Circle of Animals/Zodiac Heads," a public sculpture installation by contemporary Chinese artist Ai Weiwei, was formally opened on May 4, 2011 at the entrance to Central Park in Manhattan.
Credit: Stan Honda
Share

China has been at it this week, upping the ante in its crackdown on political dissidents.

It has formed an all-powerful internet supercop and placed further restrictions on TV. And still no word form Ai Weiwei.

Outside Central Park today, the prominent artist's first public sculpture was declared officially open. Though Ai has been behind bars since April 3, it's business as usual, according to the New York Times.

Ai should have been at the unveiling, planned well before his detainment, but New York Mayor Michael Bloomberg led a ceremony in his absence.

The installation, called "Circle of Animals/Zodiac Heads," is made up of 12 heads, each representing a creature of the Chinese zodiac. The heads are cast bronze and each has its mouth open as if making noise. Each is set upon a stake, giving the piece as a whole a barbaric feel.

At first these heads appear to be just, well, a bunch of heads. But there is a complicated backstory.

They are recreations of pieces designed in the 18th century by European Jesuits for the Manchu emperor Qianlong. Those heads stood around a fountain and spouted water all day long until they were looted by British and French troops during the Second Opium War in 1860. They only began to resurface in 2000, and five remain at large.

Ai's sculpture represents all 12. He reimagined those still missing.

Reportedly, prior to being detained, Ai said onlookers didn't need to know the backstory, and "should just look at the objects and see the connection through their own experience.”

But, clearly, a head is more than a head. It's a whole story about reclaiming what was taken away, even that which was never returned.

Ai is like the Hydra. Where his head has been metaphorically severed, 12 have sprouted in its place.