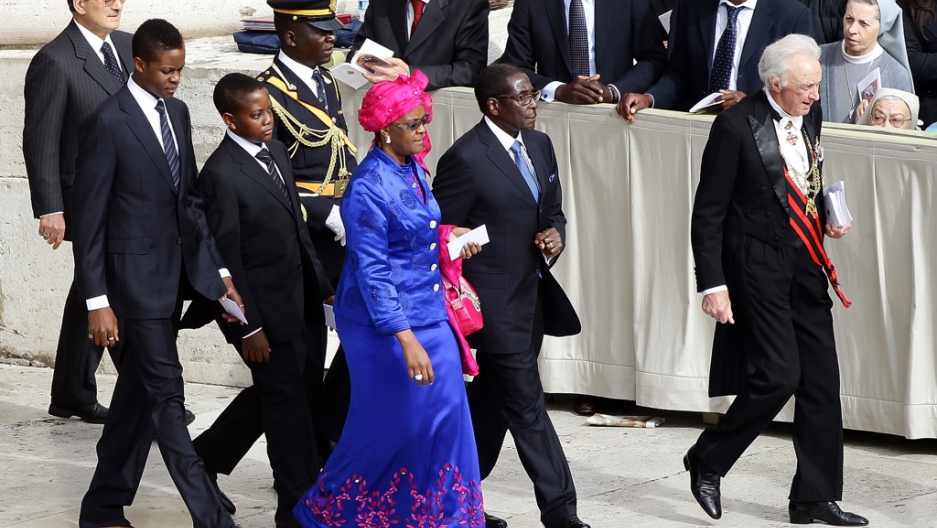 Zimbabwean President Robert Mugabe and his wife, Grace, and their sons at St. Peter's Basilica on May 1, 2011 in Vatican City, Vatican.
Credit: Vittorio Zunino Celotto
Share

What is the Vatican thinking?

What possessed Pope Benedict and the papal authorities to invite Zimbabwean President Robert Mugabe to the beatification of Pope John Paul II?

They all know that Mugabe is accused of numerous human rights atrocities including murder and torture. They know because Zimbabwe's Catholic bishops have authored several reports cataloguing the the horrors perpetrated by Mugabe's regime.

Does the Vatican not realize that Mugabe's presence was a jarring note to the beatification? Or do the papal officials just not care?

Zimbabweans expressed anger over Mugabe's presence at the ceremony.

In response to the controversy of Mugabe's visit the Vatican said said it had "nothing to hide."

Mugabe, 87, and his wife Grace, 45, filed past the casket of John Paul II on Sunday. Mugabe's presence, explained a Vatican spokesman, was a "function" of the diplomatic relations between the Holy See and Zimbabwe, "so there is nothing to hide."

There is nothing to be proud of, either.

When the British royal family revokes the wedding invitation of Syria's ambassador because the of reports that of human rights abuses, surely the Vatican could muster the moral courage to refuse to invite Mugabe to the big show at St Peter's basilica.

Mugabe is banned from traveling through Europe by the European Union and the Vatican had to obtain special permission for him to be allowed to enter the pocket statelet. It will be at least the third time that Mr Mugabe has taken advantage of the Vatican's and/or Italy's diplomatic largesse since John Paul's death.

Mugabe attended John Paul's funeral in 2005, where he stirred controversy by shaking the hand of Britain's Prince Charles. Mugabe also went to the World Food Summits in 2008 and 2009. Zimbabwe's is one of 87 foreign delegations attending the beatification.

Mugabe arrived in Rome Saturday with a large entourage, according to reports from Rome.

Zimbabwean Finance Minister Tendai Biti recently complained that Mugabe's lavish foreign trips are expected to cost the country $50 million this year,  contributing to a projected deficit of some $150 million.

Zimbabwean economists agreed with Biti’s assessment that Mugabe's trips are not productive and waste precious funding.

Mugabe may be welcomed in Rome, but back in Zimbabwe he is feuding with the Catholic bishops, according to The Zimbabwean.

Did the Vatican think that it could engage Mugabe in a discussion and persuade him to stop human rights abuses and allow free and fair elections? The Catholic bishops could have told them that such discussions have always been futile.

Pope Benedict has yet again shown that he is tone deaf to public opinion and oblivious to human rights issues.