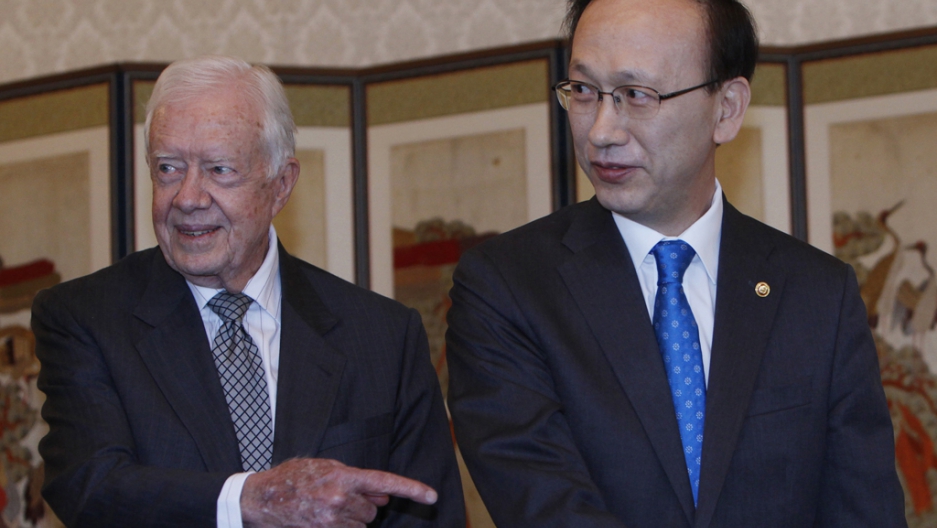 After his two-day stay in Pyongyang, there was no progress on North Korea’s nuclear front either.

Prior to his departure, Carter said he would like to meet with Kim Jong Il and the Dear Leader's third son and likely successor, Kim Jong Un. Both Kims stood Carter up.

North Korea further disrespected Carter, by calling him back after he had already left for the airport, telling him there was an “important message.”

The important message was delivered by a foreign ministry official, not Kim Jong Il. The official read out a written message from the Dear Leader, stating Kim’s willingness for “unconditional talks” on the nuclear issue and holding a summit with South Korean President Lee Myung-bak — neither of which are new proposals.

“Carter was used by North Korea like a fool,” said Toshimitsu Shigemura, an expert on North Korea at Waseda University in Tokyo.

“Firstly, he couldn’t meet Kim Jong Il. Secondly, there was no progress on the nuclear standoff. Thirdly, he just brought with him a message by Kim Jong Il to the outside world, as if he were a messenger of North Korea,” Shigemura said, adding that the only reason North Korea hosted Carter was in an attempt to draw food aid from the United States.

Washington and Seoul, both of which have adopted a hardline posture toward Pyongyang over its nuclear program, downplayed Carter's visit. The U.S. government said the trip was a private visit, underscoring that Carter didn’t carry an official government message.

On Thursday, Carter convened a press conference in Seoul at which he decried Washington and Seoul for withholding food aid from North Korea.

“One of the most important human rights is to have food to eat, and for South Korea and the U.S. and others to deliberately withhold food aid to the North Korean people is really a human rights violation,” he said.

South Korea said it won't give aid to North Korea until it apologizes for the sinking of the marine ship last year, and the shelling of Yeonpyeong Island, which killed a total of 50 South Koreans.

“I think it is counterproductive of Carter to describe Seoul and Washington withholding food aid and that was human rights violations,” said Brian Myers, an American expert on Korean affairs at Dongseo University in the South Korean city of Busan.

“The last thing we need to do now vis-a-vis North Korea is to make it feel that South Korea and Washington bear moral responsibility. Carter needs to encourage North Koreans to do a better [job] of feeding its own people.”

But many North Korea watchers said they were surprised that Kim Jong Il did not meet with Carter.

Carter is one of the few Americans depicted positively in North Korean propaganda. Previously, he met with Kim Il Sung, founder of the nation and father of the current leader. “Usually North Koreans maintain a certain respect for people who have been perceived as having friendly relations with Kim Il Sung,” said Myers.

“The fact that both Washington and Seoul frowned on Carter’s visit had the effect of lowering his status in North Korea,” said Cheong Seong-chang, a senior analyst at the security think tank Sejong Institute in Seoul. “If there was high expectation in the outside world, Kim would have met Carter.”

Lee Myung-bak, the South Korean president, said he would meet with Carter in Seoul on Friday if the message Carter brought from Pyongyang was substantial enough, according to South Korean media. Lee did not meet Carter.

“If the expected result of meeting with Carter were the same as not meeting him, then there was no reason for Kim to meet Carter,” said Jin Jingyi, deputy director of the Korean Peninsula Research Center at Peking University in Beijing.

China is host to the North Korean nuclear talks, aimed to persuade North Korea to give up nukes. It didn’t appreciate Carter’s attempt to “steal the ball,” the report said.

Shen Dingli, a security expert at Fudan University in Shanghai, said he thought Carter took on a mission he couldn’t deliver.

“Carter is a former U.S. president. He is now a civilian. He could not speak for the U.S. government. North Korea wants the U.S. to provide aid, end its hostility to North Korea, and also to lift economic sanctions. Carter can promise none of them. Then, why should North Korea give him a face, by meeting with him?” Shen said.