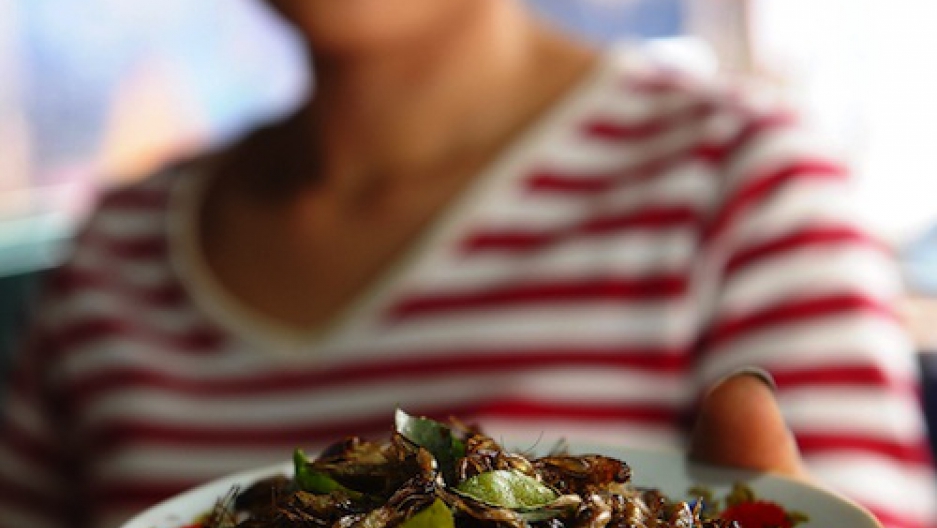 A fried insects vendor hands over a plate of fried crickets at a local market in Vientiane, Laos. Raising crickets for foods is seen as a solution to the malnutrition in the poor landlocked country.
Credit: HOANG DINH NAM
Share

The U.N. is reviving its push to feed the world with insects, the AFP reports.

These U.N. campaigns to promote bug eating pop up sporadically. Three years back insects were promoted as an ideal food source for famine victims and space station dwellers alike.

The premise is that breeding traditional livestock is resource intensive and environmentally destructive, whereas bugs can be harvested on the cheap. Moreover, they could lend much-needed protein and vitamins to areas wracked by malnutrition. It's no coincidence that the man behind the latest pro-bug revival, Serge Verniau, is a U.N. representative in Laos, where 40 percent of kids under five are malnourished, according to AFP.

As I wrote last week, that degree of malnutrition can cause lifelong damage by robbing kids of up to 15 IQ points.

But the U.N. isn't just targeting the destitute and hungry. Verniau wants to "to feed the big metropolises from Tokyo to Los Angeles" with bugs.

Even the U.N. acknowledges a "Western bias" against bug eating that clouds foreign aid agencies to the potential of bugs. While we'll eat this -- don't click unless you want to see the pinkish goop that becomes chicken nuggets -- we won't consume insects.

But perhaps we should. The modern-day American has become incredibly skittish about food. Whereas my great-grandmother boiled pig heads to make a squishy cake called "souse," my generation considers a fish served with the head attached to be icky and exotic.

Of course, no insect can ever compete with a pork chop. But I've found that some edible insects, widely sold on the street in Bangkok, are worth more than a single "been there, ate that" try. They're actually worth coming back for. I'm thinking specifically of grasshoppers, which are fried in heavy oil and sprayed with a salty, MSG-rich mist. (I didn't say they were healthy.)

The drawbacks to bugs beyond the gag factor? They're "seasonal and have a short shelf life," according to another U.N. specialist. A conference next year led by Verniau hopes to promote teaching entrepreneurs to breed and sell their own insects locally.