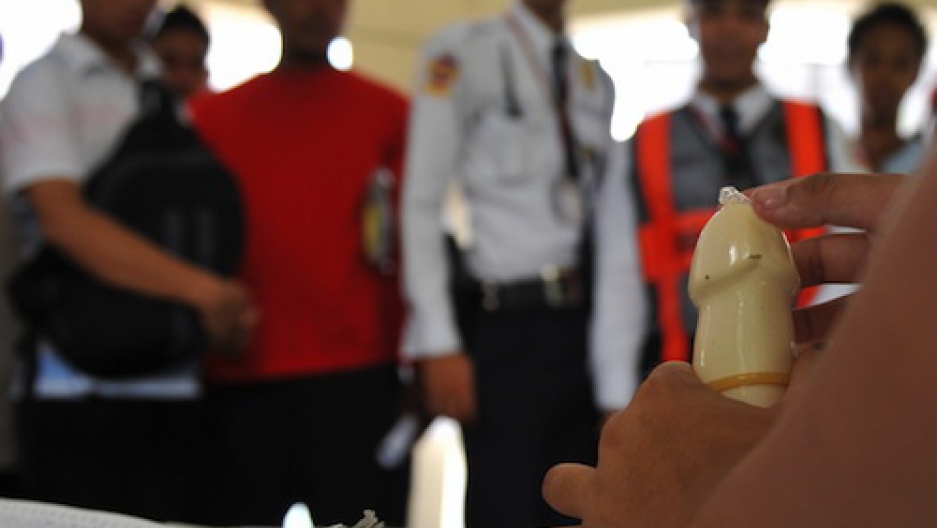 A health worker demonstrates condom use as part of a local government education program for residents on reproductive health to celebrate World Population Day in Manila on July 11, 2009. The Philippine population now stands at around 90 million, with an annual growth rate of 2.04 percent, one of the highest in Asia and above the government's target of 1.9 percent.
Credit: TED ALJIBE
Share

A Filipino Catholic bishop says a pending bill's supporters are no better than "terrorists."

A former mayor of Manila believes the bill is "worse than martial law."

You might guess the Catholic-majority Philippines is preparing to legalize human sacrifice. But lawmakers are instead considering a "reproductive health" bill that would, in addition to forbidding workplace discrimination against pregnant women, use state funds to distribute condoms and initiate more sex ed in schools.

According to the Manila-based Inquirer newspaper, the bill also encourages a two-child family, but offers no prohibition on having more kids. It does require all government hospitals to include a full range of contraceptive surgeries and methods, such as IUD, and forces couples to review family planning material before getting hitched.

But as one lawmaker emphasizes, it is not meant to "spawn a generation of sex maniacs nor breed a culture of promiscuity."

Still, the Filipino condom wars rage on. The same archbishop who compared the bill's backers to terrorists says condoms are "tantamount to killing the innocent." And as I blogged in February, a coalition of politically active bishops recently proclaimed that condoms actually help spread HIV.