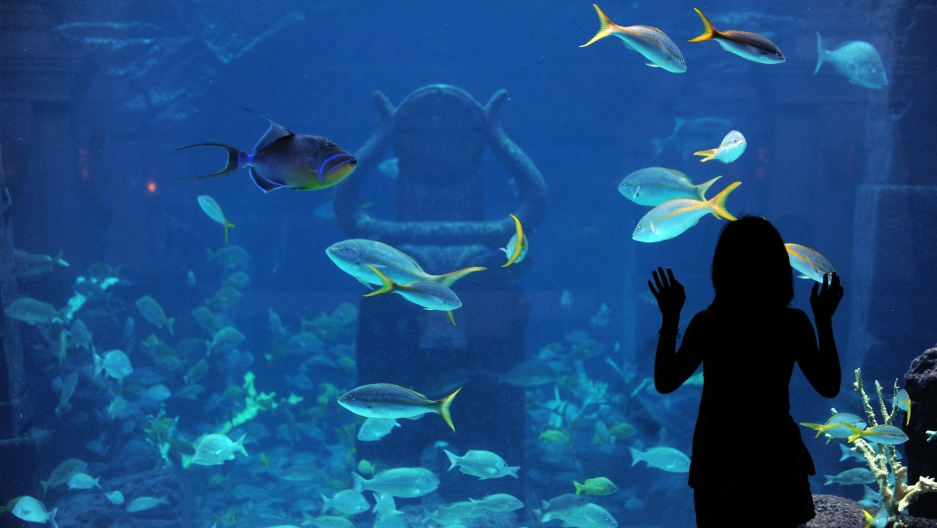 A tourist admires fishes in an aquarium at a resort in Nassau, the Bahamas, on May 29, 2009.
Credit: Jewel Samad
Share
.incontent{ display:none; }

SANTO DOMINGO, Dominican Republic — After the tiny Caribbean island of Grenada severed diplomatic ties with Taiwan in 2005, it received a token of appreciation from the mainland Chinese government: a $55 million cricket stadium.

It was part of $132 million China doled out to Caribbean countries in aid and soft loans in the years leading up to the 2007 Cricket World Cup. At the time, the investment was seen as a not-so-subtle reward to countries that had broken off formal relations with Taipei in favor of Beijing.

Ever since, China has made that sum look like pittance.

The Beijing government and private Chinese corporations are spending billions in the Caribbean, building major tourism projects, financing roads and ports and buying companies — all of which are helping open new markets for Chinese products. The onslaught has cash-strapped Caribbean governments simultaneously praising China as a welcome benefactor and questioning what the country wants in exchange.

“Nearly every island in the Caribbean, from the smallest on up, currently has a substantial investment from China,” said David Jessop, managing director of the Caribbean Council, a London-based consultancy that works with Caribbean governments. “It seems that what nobody knows is what is motivating China.”

That aside, Caribbean islands have clearly been the recipients of investment by both Chinese firms and the government of the People’s Republic of China, which is financing some of the Caribbean's most notable, and largest, projects.

The boldest broke ground last month: The Chinese government's Export-Import Bank is putting $2.4 billion toward the construction of a 3,800-room resort in the Bahamas that will boast the largest casino in the Caribbean. Roughly 5,000 Chinese workers will be brought in to construct the Baha Mar resort on Cable Beach.

Others projects recently agreed to or completed by Chinese firms or the government include:

The number and magnitude of investments has left some mystified.

At a recent dinner between Caribbean leaders and a Chinese delegation, Jamaican officials asked, “‘What does China want from us?’” a person who was at the meeting told GlobalPost. “That’s the big question that everyone has about this: Why?"

Caribbean governments have welcomed the investment — particularly the development aid — partially because other sources have dried up. For example, aid from the United States to members of CARICOM — a bloc of 15 Caribbean states and five associate Caribbean countries — has been falling since the 1980s, said Richard Bernal, former Jamaican ambassador to the U.S. and current director for the Caribbean at the Inter-American Development Bank in Washington.

“What you are seeing in the Caribbean from China was mainly economic aid at first and now it’s starting to diversify into other areas, like tourism," he said.

Bernal believes China's motivation for targeting the Caribbean is diplomatic.

"There are few countries around the world that have maintained ties with Taiwan, and 12 of them are in Central America or the Caribbean," he said. Of the 23 countries to keep formal diplomatic ties with Taipei, six are in the Caribbean: Belize, the Dominican Republic, Haiti, St. Lucia, St. Kitts & Nevis, and St. Vincent.

China’s ambassador to Barbados, Wei Qiang, told GlobalPost that China has no interest in competing with other world powers in the Caribbean. Rather, it sees the islands as fellow developing countries and potential partners.

But it appears China has received little in return. Unlike other regions that China has targeted, like Africa and South America, the Caribbean largely lacks the commodities the rising superpower craves. The Caribbean is not a major producer of raw materials or food. Tourism is almost universally the economic driver.

And with relatively little buying power — the total population of the 39 islands is about 40 million, about 3 percent of China’s population — the Caribbean will not be a major importer of China’s goods.

Take Grenada. Among the Spice Island’s largest exports are nutmeg, cloves, ginger and cinnamon, hardly the basis of the Chinese economic expansion. Its population is under 110,000. China has 655 cities of at least 100,000 people, according to a 2010 report by Deloitte.

Yet, the island has seen an influx of Chinese money since the building of the cricket stadium in 2007.

“The Chinese government and private companies are stepping in finance projects, big projects, that were stalled due to the recession,” said Richard Simon, press secretary to Prime Minister Tillman Thomas.

Simon could not name the projects because the sides are still negotiating terms. “We believe that the relationship with the People’s Republic of China can only grow. China will be the main country to deal with going forward,” he said.

Aside from those major investments, Simon said Chinese business owners are opening convenience stores and restaurants. “On the streets, you’re seeing a presence that you didn’t see just a few years ago.”

The warming relationship has benefited Chinese companies, Ambassador Qiang said, but “these are small markets and small countries and we don’t have huge amounts of trade in terms of volume. From the point of view of diversification of our foreign trade partners, we think all these markets are worth working on as far as we can.”

Residents of the islands seem to have a different take. Tomas Lora, who drives a cab in Santo Domingo, Dominican Republic, said a few months ago the company he drives for upgraded its vehicles to a fleet that looks and rides like a Toyota. “It’s not, it’s a Chinese car,” he said. “You wouldn’t know the difference because it looks like a Corolla. But they say it costs about half as much as a Toyota.”

“You’re seeing Chinese products everywhere in the last few years,” he said. “It’s all ‘Made in China.’”