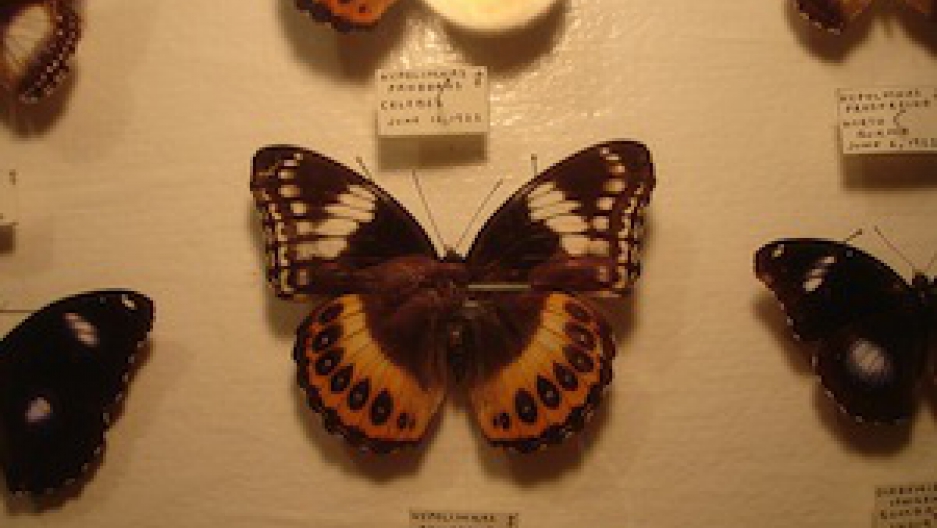 Photo of a butterfly (Image by Flickr user A. Jaszlics (cc:by)

An estimated $200 million flows through the illicit butterfly trafficking trade every year. Queen Alexandra butterflies, for example, "will go for $10,000 dollars a pair," according to writer Jessica Speart. "I've even heard of butterflies, dealers have told me that it's nothing for obsessive collectors to spend $60,000 dollars on butterflies."

To fetch that kind of price, "they are dead," Speart explains. "You have to kill them almost immediately as soon as their wings open and begin to harden so that you have a perfect, perfect specimen with no scratches, no tears. And the only way to get that is to do it soon after they hatch."

Speart is best known for her fiction, as the author of the "Rachel Porter" series. In her new book, "Winged Obsession: The Pursuit of the World's Most Notorious Butterfly Smuggler," Speart turned to nonfiction to uncover the world of illegal butterfly smugglers.

At the middle of this world, Speart found a man named Yoshi Kojima, a Japanese national who began prowling around US National Parks in the 1990s. "He would go into certain areas and he would just wipe [the butterflies] out," Speart told Living on Earth. "And it wasn't even that it was totally illegal to collect some of these. It was just the extent that Yoshi did it." Speart recounts:

There was one called the Apache Fritillary, which is one of California's largest and prettiest butterflies that's on this restricted range of the Sierra eastern slope. He caught 500 of them in two days and shipped them to Japan for sale.

Kojima became a celebrity in the butterfly trading world. That's when a young U.S. Fish and Wildlife Service agent named Ed Newcomer went undercover to catch him. The book details the strange world of sex and money that Newcomer uncovered.

Eventually, Speart became entrenched in the story herself. "I became obsessed with Yoshi, because it was such a dark, quirky, weird tale," she says. "The more I dug into this, I began to learn more and more about Yoshi that even law enforcement didn't know."

So Speart decided to fly to Japan and go undercover herself. She explains:

I managed to stake him out, to quote unquote, "bump into him," and become friends with him. We would go out for coffee, we would go out for dinner, to the point where he wanted me to be his liaison over here in the States for the illegal trade. And that's when it really started getting strange.

To this day, Speart is still not sure that Kojima knows that she was an undercover writer. "As far as I know, he -- maybe he has figured it out now since this book came out -- but he hadn't," she says. "What happened was I was feeling so guilty when I was doing this because he was actually being very nice to me."

Then, she eventually caught on to the fact that he was trying to set her up. She explained:

And the last night that we went out to dinner, that's when he started saying, 'You know, I would really like to sell my butterflies on eBay, but I don't know how to work eBay. Do you know how to work eBay?' Now this guy knows how to work internet auction sites. He's got his stuff up all over Japan, everywhere. This is what he had done with Ed Newcomer, because he wanted Ed Newcomer to take the fall if he was caught. And suddenly, I saw the same game happening.

He began pushing her harder and harder to get into the illegal butterfly trade. "And that's when I spoke to one of my friends who's an undercover agent, and he said, 'Abort, get out, enough, it's the end.' And that's when my relationship with Yoshi came to an end."