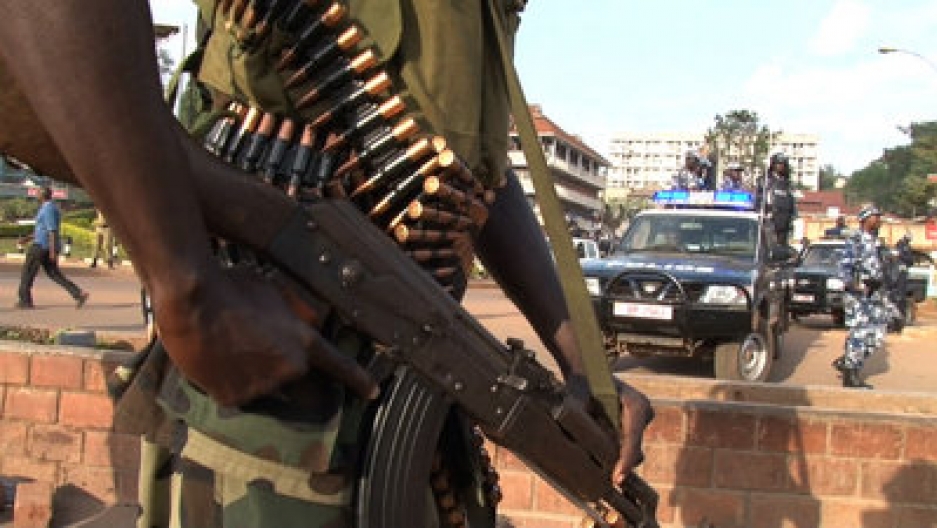 Share
By Dennis Porter Kizza Besigye, Uganda's main opposition leader is known for a particular kind of demonstration. He and his supporters walk to work to protest rapidly rising prices. But not everyone is comfortable with the protests. A group of Ugandan women greeted Kizza Besigye Thursday morning as he walked out of his front gate. They asked him not to march in their town. They may support Besigye, but one of the women, Annet Nantondo, said they're concerned that the police response to Besigye's walk to work protests threatens their children and businesses. "We are just praying for him to stop walking so that our area comes into peace. That's our mission here," Nantondo said. Besigye said he doesn't want to cause trouble for the local people, but he still planned to walk. So he drove to the next town, before getting out of his car and walking towards his office. But he was arrested and charged with taking part in an illegal protest. Police used tear gas and rubber bullets to disperse hundreds of Besigye's supporters. This was the fourth walk-to-work protest that Besigye's party has called. The trigger for the marches has been rising prices for fuel and food. Most have rocketed 30 to 50 percent. Some staple foods have nearly doubled in just the past few months. Meddy Kizito, who has been selling fruits at a market in Kampala for almost five years, said he has some unhappy customers these days. "They complain, and at times they quarrel with us because of prices," Kizito said. "They think we are responsible for charging those higher prices. Some use abusive languages and call us thieves." He said that many people have just stopped buying. The rapid inflation may not be easy to fix. Two causes of the inflation are rising oil prices and a drought. But John Ddumba-Ssentamu, an economist at Makerere University, said the third cause is political. He said that the incumbent leader, Yoweri Museveni, injected a lot of money into the economy during the recent presidential election campaign. "So people have more money, and they are demanding goods. The demand is exceeding the supply," Ddumba-Ssentamu said, and the result is higher prices. But Kizza Besigye insists that inflation can be brought into check by, among other things, making government operate more efficiently. Meanwhile the protests continue, and even the demonstrators say they fear violence. Heavily armed soldiers joined riot police on the streets after Besigye's arrest. They carried machine guns and bullet-belts crisscrossed their chests. They kept close watch on shoppers in the market. Some Ugandans may have been tempted to join the marches. But they avoided the soldiers and went back to work.