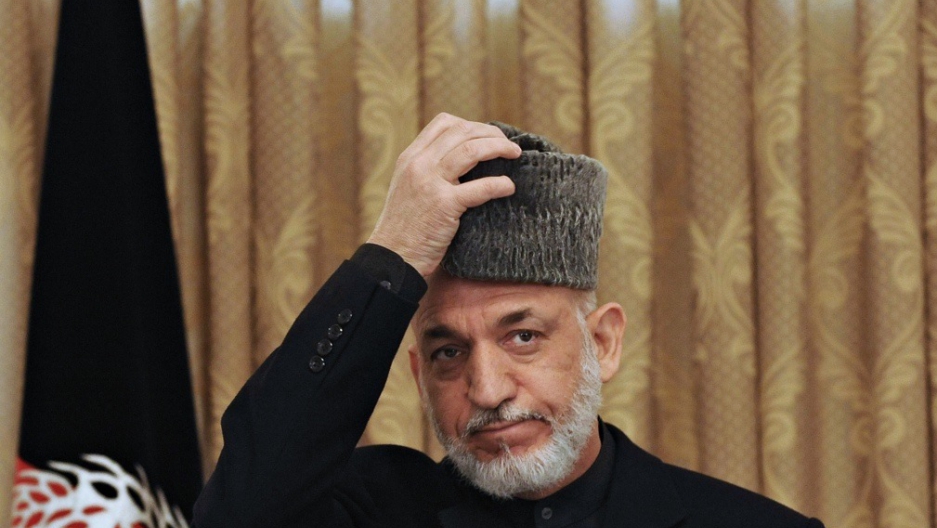 Afghan President Hamid Karzai at a press conference at the Presidential Palace in Kabul on April 11, 2011.
Credit: Massoud Hossaini
Share

KABUL, Afghanistan — The chairman of Afghanistan’s Central Bank has revealed a government plan to rescue Kabul Bank, the country’s largest private financial institution. The announced measures include an aggressive campaign to recoup lost assets and a no-holds-barred investigation to expose and prosecute the perpetrators.

But while millions of small depositors may ultimately be protected, it is highly unlikely that any of Kabul Bank’s major shareholders will ever face trial. The risk of unsavory facts coming to light would be just too great, observers said. Those implicated in Kabul Bank‘s financial imbroglio include the brothers of the president and vice president.

In addition, according to an anonymous source inside the finance ministry, Kabul Bank may have given millions in off-the-books donations to Hamid Karzai’s re-election campaign. If substantiated, this fact could theoretically invalidate Karzai’s candidacy.

But in Afghanistan’s legal and financial labyrinth, facts are so cleverly concealed that they may never come to light. Experts say that the system, at present, simply lacks the transparency that would allow a full investigation.

According to Central Bank Chairman Abdul Qadir Fitrat, Kabul Bank will now be divided into two parts, with deposits and good loans being relegated to the New Kabul Bank. The bad loans, totaling $909 million with tax and interest, will be siphoned off into a separate financial structure.

This move is designed to resolve at least some of Afghanistan’s problems with foreign donors — the International Monetary Fund had threatened to blackball the country, making it very difficult for the World Bank and other organizations to direct hundreds of millions of dollars in reconstruction money into Afghanistan.

Fitrat was adamant that those who took unsecured and illegal loans from Kabul Bank — primarily its well-connected shareholders — would be pursued and made to repay the money. If they would not or could not do so, they would face criminal action.

The attorney general is looking into the case, and the High Office of Oversight on Anti-Corruption Activity (HOO) is also investigating.

But there is widespread skepticism within Afghanistan that any prosecutions will result from the probes. Those under scrutiny are simply too powerful to be brought down. And the investigators lack the financial acumen to trace the alleged graft.

Add to that the fact that the current head of the HOO, Azizullah Ludin, is the same man who was forced to resign as head of the Independent Election Commission last year under widespread allegations that he had helped Karzai fiddle with the presidential election results, and the story becomes even more convoluted.

“We know very little about what has really happened at Kabul Bank,” said Haroon Mir, head of Afghanistan’s Center for Research and Policy Studies. “The government seems to want to manage this scandal, and it is at their discretion. The attorney general will not be able to conduct a proper investigation. We need bankers to assist in this; the people in the attorney general’s office are not trained in finance. We have no prosecutors with financial backgrounds.”

Outright fraud may be easier to pinpoint, but the stature of those who stood at the head of Kabul Bank will almost certainly make prosecution impossible.

“The shareholders are very powerful people,” Mir added. “In any other country they would be in jail. But here we will find some middle ground, some compromise. For us, the important question is who is going to pay the bill for the lost money.”

The major shareholders of Kabul Bank included the brothers of Karzai and his vice-president, Marshal Mohammad Qasim Fahim, as well as Sherkhan Farnood, an internationally ranked poker player.

Farnood has long been known as a major contributor to Karzai’s re-election campaign. But if, as is now being alleged, the money came from Kabul Bank and not Farnood’s own pocket, the country could be plunged into a serious political, as well as financial, crisis.

A source inside the finance ministry, who does not want to be identified due to the delicacy of the information, said that the money contributed to Karzai’s campaign came from Kabul Bank itself. The transactions were never recorded, the source said.

The donations, according to Mir, were motivated more by self-interest than political persuasion. Kabul Bank was in the running to be the bank of choice to disburse the salaries of civil servants, security forces and other government workers, which would bring hundreds of millions of dollars into its coffers every month.

Various reports claim that the bank delayed salary payments on more than one occasion to benefit from the interest that accrued on the giant sums over even a few days.

“(Kabul Bank’s) objective was to get those contracts,” Mir said. “Their focus was this monopoly on government salary payments.”

The bank even had contractual relations with embassies and NATO, he added, something that may have added another layer of protection.

“The coalition forces wanted a bank to help them pay the salaries of the Afghan National Army and Afghan National Police,” he said. “Kabul Bank was the only institution able to do this.”

According to Afghanistan’s election law, institutions are not allowed to make contributions to individual candidates.

“For the bank to make contributions as a legal entity, using the deposits of its shareholders, is not legal,” said Nader Naderi, chairman of the Free and Fair Election Foundation of Afghanistan (FEFA). “If Farnood made the contributions as an individual, on his own behalf, that is a different legal situation.”

But it may be impossible at this late date to unravel the chaos surrounding the fraud-stained 2009 presidential ballot. Regardless of newly introduced reporting mechanisms designed to improve accountability, financial arrangements were quite murky.

“There was no transparency in the 2009 presidential elections,” Naderi said. “There were no proper records, making transactions difficult to trace. Campaign offices did not have systems to enable monitoring of their finances.”

Candidates in the presidential race were required to file financial disclosure forms every 15 days, subject to the scrutiny of the Independent Election Commission. But the rules for filing and the degree of oversight were so amorphous as to make the requirement almost meaningless, according to election observers.

The European Union Election Observation Mission complained in its reports that “… there were no mechanisms to systematically check the figures,” and the International Foundation for Electoral Systems (IFES), in its own report, acknowledged that the financial disclosure systems were far from complete.

“(The system) admittedly does not allow for in-depth auditing of the received reports,” wrote Magnus Ohman, in “Campaign finance oversight in 2009 Presidential elections in Afghanistan,” written for IFES in 2009.

In other words, according to Martine van Biljert, a senior researcher for the Afghanistan Analysts Network, the reports were more for show than for actual information.

"The way that campaigns were run in Afghanistan did not allow for exact bookkeeping. And everyone knew they would not be audited, that they just needed to hand in something,” she said. “It's better than nothing in that there is some kind of system and candidates have to at least go through the motions, but it doesn't tell you how money was really spent."

According to Karzai’s reported financial statements, he spent just over $2 million on his campaign, far more than any other candidate, but possibly far less than actual costs.

So it may be all but impossible to determine whether Kabul Bank donated funds, and if so, how much.

For now, all questions regarding Kabul Bank are being referred to the attorney general and the HOO. Karzai has promised that the culprits will be punished. In that number he includes the Western organizations funded by international donors to provide advice to the Central Bank.

This is reminiscent of the way Karzai accused Western institutions, such as the United Nations and the European Union, of perpetrating the lion’s share of the fraud in his own presidential ballot.

In that election, the scandals were ultimately swept under the rug in the interests of getting on with things.

It may be no different this time around.

“Given how institutions function in Afghanistan today, and given the way corruption investigations have been done so far, it seems very unlikely (that there will be prosecutions for the Kabul Bank scandal)," van Biljert said.