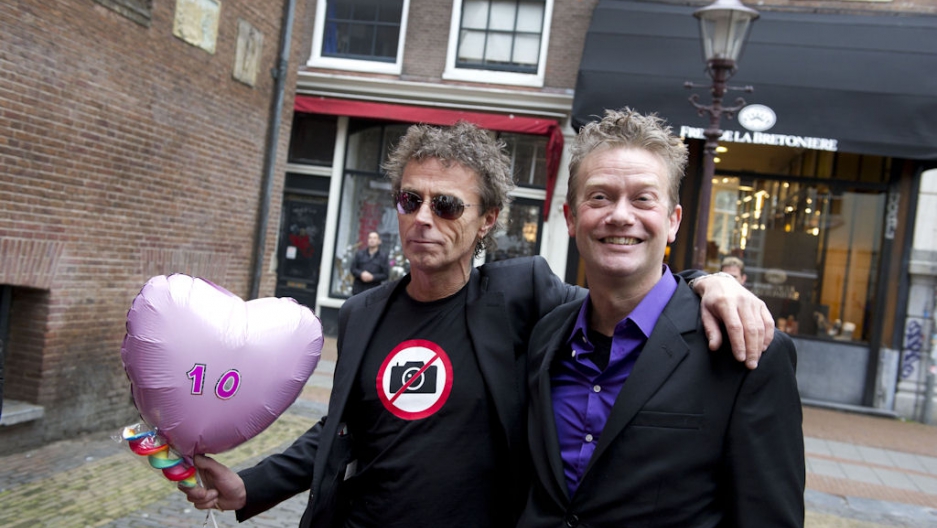 Jan van Breda (left) and Thijs Timmermans pose after their wedding, on April 1, 2011 in Amsterdam. The Netherlands celebrated the 10th anniversary of the world's first legally binding gay marriage with another set of nuptials.
Credit: Evert Elzinga
Share

AMSTERDAM, The Netherlands — It's been 10 years since Ton Jansen and Louis Rogmans joined three other couples in Amsterdam City Hall to say “ja, ik wil,”  triggering an international revolution for gay rights.

On April 1, 2001, the Netherlands became the first country in the world to carry out legal same-sex weddings. Since then nine other nations have legalized gay marriages. Uruguay moved to be the next in early April when a bill legalizing gay marriage was introduced in parliament.

“Gay marriage is Holland's best export product because we have shown that it is possible,” said Vera Bergkamp, head of the Dutch gay rights organization, COC.

In the country that pioneered the movement toward same-sex marriage, however, gays haven't exactly been rushing to tie the knot.

Data from The Netherlands' national statistics agency showed 15,000 gay couples have married since 2001. That means just 20 percent of gay Dutch couples are married, compared to 80 percent of heterosexual couples, the agency says.

Bergkamp sees three main reasons for the lack of nuptial enthusiasm among gay couples: less pressure from family and friends, fewer gay couples marrying to have children than their straight counterparts, and a more individualist, less family-orientated mindset among many homosexuals.

“For heterosexuals, it's normal when you're in a steady relationship for more than a year, that a lot of people start asking, 'well when are you getting married?' With two women or two men you don't get that yet,” she explained. “It's only been 10 years, not 100 years.”

For couples who go for it, being able to marry can be moving both on a personal level and as a symbol of the gay community's integration into the mainstream of Dutch society.

“It was a huge step,” said Lin McDevitt-Pugh, who married her American-born wife, Martha, in Amsterdam in May 2001. “For me it was incredible … . I'd been to my brother's wedding and my sister's wedding and their spouses were welcomed into the family. Now finally I was able to have my family take my partner in. The moment we got married there was a switch, she was now one of us.”

McDevitt-Pugh, who is originally from Australia but now holds Dutch citizenship, helps run the Love Exiles Foundation, which supports gay couples who have been forced to live abroad because their homelands won't give legal recognition to their relationship. She says the problem is particularly acute for American gays with foreign partners, who are frequently denied U.S. residency rights.

Even in The Netherlands, tolerance is not limitless. Tighter immigration rules planned by the center-right government would mean that unmarried people would no longer be able to bring non-European partners to live with them in The Netherlands. “This can be horrible for heterosexual couples, but it's even worse for gay couples, who in most cases can't get married somewhere else before they come here,” said McDevitt-Pugh.

The Netherlands' reputation for tolerance has also been dented in recent years by a rise in violent attacks on homosexuals. The trend has been been seized upon by right-wing politicians who blame Muslim immigrant youths for the attacks. It's a theory that many gays reject.

“If you look at Amsterdam there is a problem with Moroccan boys, a small group of them, but if you look at Holland as a whole, you can't say that it's anything to do with Islam,” said Bergkamp.

“A big part of Dutch society accepts that two men or two women can marry, but there will always be a small part that says marriage is just for a man and a woman,” she said. “Social acceptance in Holland has grown over the past years, but when people see two women kissing, or two men walking hand-in-hand, some people still may take offense.”

Concerned by the negative publicity triggered by attacks on gays and the closure of some emblematic gay bars, Amsterdam's City Hall is keen to re-establish the city's reputation as a gay capital. There's talk of a gay museum or public support to strengthen the gay character of certain neighborhoods. The municipal website proudly promotes gay-friendly attractions and City Hall is hosting a small exhibition to celebrate the anniversary of gay marriage. It includes a slideshow of wedding photos featuring grooms in black T-shirts, cowboy suits or matching top hats and tails, brides both in slinky mini-skirts, and a smiling lesbian couple greeted by an air force honor guard after their ceremony.

Having led the way for gay rights around the world, however, Amsterdam may struggle now to re-establish itself as Europe's preeminent gay city simply because the tolerance that it pioneered is no longer unique to the Dutch capital. Belgium, Spain, Norway, Sweden, Portugal and Iceland have all followed The Netherlands in legalizing same-sex marriage and cities from Madrid to Berlin now have thriving gay scenes to rival the bars and clubs of Amsterdam.

“Ten years ago we were the really THE gay country of the world and Amsterdam was the gay capital. Now it's really difficult to stay in that position," Bergkamp admitted. "You see other countries like Spain, even Portugal are increasing their tolerance. But Amsterdam is still a great place for gay people.”