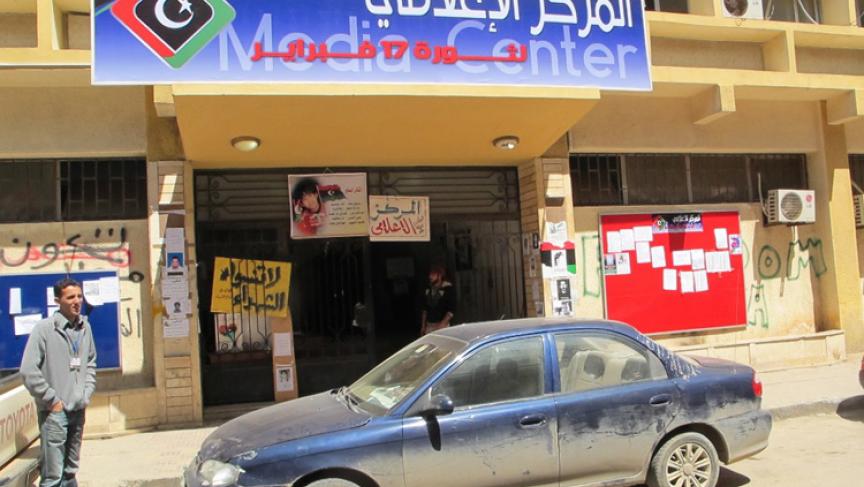 Share
by Ben Gilbert Libyan rebels are looking for all the help they can get to handle Muammar Gaddafi's army. They could also use some assistance with their media campaign. The rebel's public relations efforts have highlighted the humanitarian crisis in Misrata. Since the beginning of the uprising in Libya, rebels have used Facebook, Twitter, and a network of western educated, English speakers to reach out to the international media. When the foreign press first entered eastern Libya in late February, they were greeted as liberators. In Benghazi, a massive crowd of demonstrators chanted "CNN, CNN" as the first western television crew filmed from the top of a nearby building. Now, nearly two months later, the same burned out building houses the rebel's "Press center." Here, journalists can find free internet access, pamphlets outlining the rebel government's structure, and helpful volunteers. Isha Aftaita is one of the rebels' volunteer press coordinators. Raised in Canada, the 23-year-old returned to Libya last year to teach English in Benghazi. Now, she's one of the first people many of the thousands of foreign journalists meet when they converge on the rebels' de facto capital. "We release the press passes, we register whoever comes in," Aftaita said. "Because officially you guys aren't in Libya, you guys have no stamp, so be sure with safety and security procedures. We try to get translators and drivers and together with press". Objectivity is difficult Many of those drivers and translators are also volunteers, so a journalist has to be careful. The volunteers are nearly all pro-revolution, making objective coverage difficult. But this is not Gaddafi's Tripoli, and journalists are free to explore on their own, sometimes to the rebels' detriment. Aftaita said the goal is to show journalists that the rebel government, the revolutionary transitional national council, is actually in charge of what's happening in eastern Libya and on the front lines. "What we're trying to show with the media is that the council is connected to even the lowest ranks of whatever we're trying to do right now, more or less," Aftaita said. But it's not easy. As the rebel media campaign has sought to cater to the press, it has also found itself on a steep learning curve. The rules of war On a recent "field trip" to visit captured Gaddafi forces in Benghazi, the rebel media minders received a call from an agitated Human Rights Watch staffer named Peter Bouckaert. He told the rebels they were in violation of the Geneva conventions by marching Prisoners of War before the press. When the minders tried to shut the tour down, they then drew the ire of dozens of angry journalists. "Who is Peter?" yelled one journalist. "Does he have authority over the council?" The rebel spokesman said "no, but we respect human rights, we are not like Gaddafi, ok". Eventually, the journalists won, and were brought into the prison. But the event was anything but informative, as a gaggle of journalists wielding TV cameras and microphones surrounded a dozen weary men. Rebels in camouflage fatigues also launched questions at the prisoners. The rebel's press men, in suit jackets, translated for a captured brigadier general named Mohammad Alladine Hamesh. "I asked him how he's been treated," the rebel spokesman said, "and he said the treatment is perfect, I have not been treated badly. "Then this guy here asked 'are you just saying this in front of media,' and the general said, 'no, I'm saying this.'" Mustafa Gheriani hopes to avoid embarrassing episodes like this in the future. He said most of the rebels' PR footwork is done by him and two other Libyans, a teacher at a dental school and an agricultural engineer. "We found ourselves in this position because of need more than anything else. And in Libya, in this revolution, everybody volunteered with whatever they can. Some picked up the gun, and some picked up the microphone," Gheriani said. "We found ourselves in the press, we didn't really know much about it, we learned the hard way, we're still learning." Gheriani is a US citizen, and calls Fenton, Michigan home. He happened to be on a visit back to Libya in February when the revolution erupted. His only experience with media before this was during a run for the school board. He lost. "It was fun. You experience democracy at its best when try to do something like that. And we hope we'll have the same in this country." Not a bad effort at linking American democracy and the Libyan rebel cause. The rebels have also used Twitter, Facebook and other social media to lobby both the media, and western governments. And they've gotten a little outside help. The "transitional council" has hired at least one western public relations consultant to come to Benghazi in the hopes he can help them hone their message.