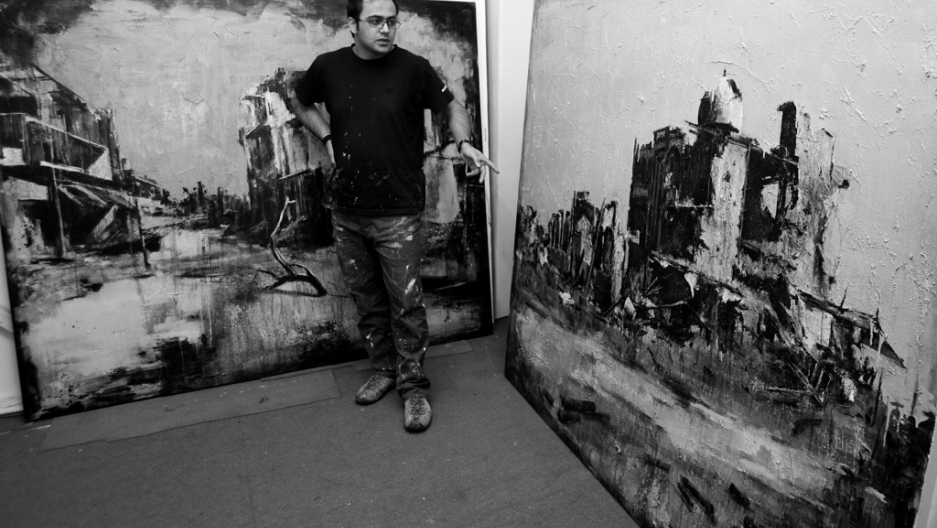 TEHRAN, Iran — On Dec. 21, the longest night of the year, and a holiday in Iran that far predates Islam, a few dozen people gathered in the home of Tehran-based curator Simin Dehghani.

Among the guests were local painters, photographers, writers and friends enjoying an evening amidst a collection of work by some of Tehran’s most promising young artists.

Dehghani, who studied art in the United States, returned to Iran, the country of her birth, in the late 1990s to begin a career promoting local artists and their work. In the years since Iranian President Mahmoud Ahmadinejad took office, the clock has been rolled back on many restrictions governing artists, both in granting permission to create their work, and then again to exhibit it.

But despite these conditions, there is a renaissance taking place in Iranian art, and its inspiration comes from the many struggles facing today’s youth.

Most notably, the aftermath of the 2009 election has also left an indelible imprint that artistically cannot be ignored.

“People experienced something amazing last year in Iran,” Dehghani said, referring to the mass protests against the reelection of Ahmadinejad and the subsequent government crackdown in 2009. “They saw things they will never forget. They felt things they had never felt before. It affects you. You can’t help but be affected by powerful images. Not just in a photographs or news footage, but in things you witnessed firsthand.”

While many artists understandably chose to leave Iran permanently after Tehran’s season of unrest, others have stayed, demanding their right to express themselves, although it is a liberty clearly not protected by Iranian law.

Still, there is room to create in Iran even amid the limitations, and many in and around the industry question the real reason so many artists have fled in recent months.

“I think some artists who left because they claimed their “lives were in danger” perhaps were too influenced in their work by recent social and political events and knowingly did something to upset the authorities and used this as an excuse to flee and emigrate,” Dehghani said.

The working conditions for artists in Iran have deteriorated immensely since reform-minded president Mohammad Khatami was replaced by the hardliner Ahmadinejad in 2005. The Khatami period was considered the golden era of expression inside Iran, and that was most visible in the arts and the relative ease with which artists could exhibit their work.

Despite the tighter restrictions, though, a new maturity is appearing in Iranian painting and this has signaled a new interest in up and coming Iranian artists.

“Now what I’ve come to, after everything that’s happened here, I organize exhibitions and try to promote young artists as much as I can, especially the ones who aren’t creating work that you see in the auctions. It’s not just a girl in a chador,” said Dehghani.

She was referring to art that simply reinforces long held stereotypes of what “Iran” is. A trend that increasingly belongs to the past, as a new wave of Iranian artists are creating groundbreaking work that not only questions the wisdom of a system that claims divine rule, but deals with subjects that go beyond longstanding cliches about the Iranian condition.

Of the artists who continue to work in Iran, many use strong messaging to point out the hypocrisy and inconsistencies within the power structure. While their work may not be easily shown, the essential point is that they are still producing.

One of them is painter Shahpour Pouyan, whose work usually depicts figures that resemble phalluses, including skyscrapers and horse hooves.

“I was born in the early days of the revolution and I spent eight of my first years living through a war,” he said, adding that his work largely deals with, “The relation of money and power and their affect on human life.”

Although Pouyan’s work has been the subject of government censorship — and actually was the reason several exhibitions were closed — that hasn’t deterred him from continuing to paint his graphic subjects or pushed him to leave Iran.

In the face of such difficult working conditions, he echoes a sentiment shared by many Iranian artists, stating that, “My work is completely dependent on Iranian and Middle Eastern cultural factors.”

Others take a different view of how local factors and Western aesthetics interact to form a contemporary Iranian style, but there is some consensus on the social factors that inform most artists’ work.

Indeed the tumultuous history of modern Iran that has included periods of democracy, monarchy and theocracy as well as one of the 20th century’s bloodiest wars, provides a large canvas, especially for young artists eager to move beyond the country’s heavy past and express themselves in all the ways that have become commonplace in the rest of the world. It should be no wonder, then, that sex, gender roles, violence and power are recurrent themes.

As Iranian artists resist leaving the seat of their inspiration, preferring to stay true to these homegrown visions, Western collectors are beginning to have a more profound appreciation for the messages within Iranian art. In the process a language of its own is developing.

Increasingly, art lovers have come to understand the often-subtle symbolism alive inside an Iranian painting. In central Tehran, near the city’s university, several galleries surround a municipality-funded center dedicated to the arts known as the House of Artists.

At the Assar gallery an exhibition curated by up and coming, and often controversial, local artist, Vahid Sharifian, displays some of these images steeped with subtle messages of subversion.

In one piece, a blurry eye chart descends into the colors of the Iranian flag, a pair of inverted capital E’s resemble a bearded face, the lower letters forming a robe that might be the silhouette of a mullah. To the casual viewer the message is unclear, but definitely no accident, according to Sharifian.

Another of the artists displayed in that show was Ala Dehghan, 29, a painter trained in the classical Persian miniature painting.

“I have grown up in the paradoxical environment of present day Iran. I have chosen to recreate some of these contradictions in my artwork,” she said.

Explaining how she uses these old techniques to depict themes relevant to contemporary Iranians, Dehghan said, “My work embodies the two aesthetics of Western and Eastern cultures. Both have enriched me; the Eastern narratives and magical imagery alongside Western contemporary practices.” In juxtaposing the two forms, she said of her painting, “often depicts the absurd and the darkness, which is reminiscent of the clash of modernity and Eastern cultures and arts.”

That clash continues to play out in the lives of many Iranians, and far from finding the often repressed atmosphere of Tehran too stifling to work in, these young artists find their creative inspiration in this charged environment.

“Personally, I think that unless you’re a political activist you can live and work in any society,” said Simin Dehghani, the show’s curater. “If people are clever, they can find their way around the limitations and say what it is that they want to say.”