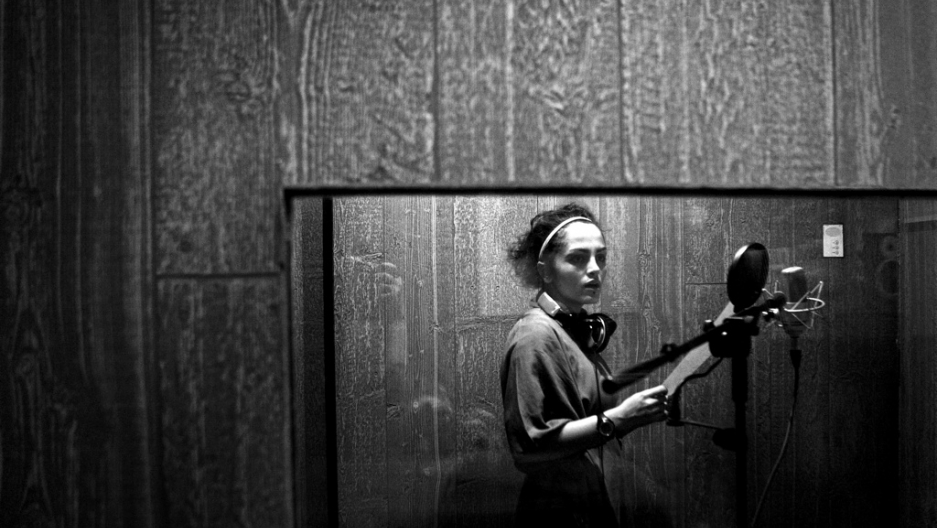 TEHRAN, Iran — On a cold, gray afternoon, the members of a heavy-metal band called The Zax are thrashing out a practice in an industrial warehouse that appears to be a distribution center for smuggled cigarettes on the outskirts of Tehran.

They’ve wallpapered the warehouse with pieces of foam and other muffling materials to create an acoustically acceptable environment to hammer out a style of music inspired by Metallica without disturbing the neighbors, or alerting Iran’s notorious “Ministry of Culture and Guidance,” which would like nothing more than to shut them down.

Ako Raoofi, 22, the band’s rhythm guitarist admits almost apologetically, “We just want to make music that we can listen to in our cars.”

While the desire to make music that they enjoy is paramount, the other main objective of Iranian bands, just like bands anywhere, is to perform in front of an audience, ideally inside Iran — and that is a very rare occurrence.

“It’s our dream to play for thousands of people, but obviously we’d rather play for 20 people right here in Tehran,” said Farraz Jabbari, 20, the bassist for The Zax. “We always want to do something here, in Iran.”

Ironically, though, the combination of legal restrictions along with the connective power of the internet and downloadable tracks means that Iran’s most successful underground artists achieve their initial successes outside the country.

For the better part of the past three decades, the only way Iranian musicians could have their music heard was to flee their homeland and record abroad, which meant a life destined to be spent in the diaspora, playing for crowds nostalgic for their homeland.

Quite a lot has changed, though, since the 1979 Iranian revolution, which led to the prohibition of many activities including listening to music in public. The effects of Ayatollah Khomeini’s edicts were far reaching, even inspiring the 1979 concept album "Joe's Garage" by American musician and free speech activist, Frank Zappa. In the liner notes Zappa writes, “just be glad you don't live in one of the cheerful little countries where, at this very moment, music is either severely restricted ... or, as it is in Iran, totally illegal.”

Over time, though, the prohibition of certain activities has flowed up from beneath the surface of the city and Tehran’s rich, albeit disjointed, music scene is a thriving example. Furthermore, the introduction of file sharing technology and Iran’s notorious lack of copyright laws, have provided conditions optimum for music produced in Iran, mostly without government permission, to be recorded locally and listened to throughout the world.

Impromptu studios and jam spaces have cropped up throughout the Iranian capital. Finding them isn’t always easy, but it’s by no means impossible, and the sounds emanating from inside these cocooned walls are growing in maturation and reach. For the first time since Iran’s 1979 revolution, Iranians are listening to popular music produced both inside the country and among its scattered diaspora.

The demand for music produced in Iran is steadily on the rise, and will continue to grow, according to the editors of a leading online resource for Iranian underground music, the Seattle-based Zirzamin.org, which literally means underground in Farsi.

“Should the Iranian government be more flexible, Iran would have a huge music industry as it consists of a young population hungry for new experiences,” one of Zirzamin's editors said.

Sites like Zirzamin highlight various acts from Iran, offering reviews of the latest underground recordings and ensuring that there is an audience for these fresh talents that in past years might have gone unnoticed.

Maral Afsharian, with her ranging voice, powerful lyrics — sung in English — and her stunning features, is the perfect example of an artist from Tehran’s underground that is in many ways ahead of the times within her own musical community.

Her unique brand of electronic rock, first as the lead singer of the group Plastic Wave, and now as a solo artist, has begun to achieve attention worldwide. The band was even invited to play at the prestigious and avant-garde South-by-Southwest (SXSW) festival in Austin, Texas. Ultimately the members of the band were denied visas to attend SXSW.

In her funky Tehran flat that feels more East Village than Islamic Republic, home to a variety of animals, including a yard long iguana that often roams freely, Afsharian explained her feelings about the transformation taking place within Iranian music and her own decision to continue playing in Iran, rather than trying to flee as so many other artists have in recent years.

“Most of them have no art in their music or at least nothing new in their music, so they need a very attractive story to get famous. They use this standard story: We cannot play music in Iran. Technically that’s true, but they can make music here and perform in other countries if they’re good,” she said.

Afsharian chooses to sing exclusively in English because, she says, “Farsi is very melodic. It doesn’t really fit the riffs and chords of rock music.”

Her accent alone signals to listeners that she’s singing of experiences had in a far off place. Her lyrics possess a rhythm that sticks long after the song finishes, as in Autotomous, a track on Plastic Wave’s [Re]action record in which she sings:

I had to dress like a clown just to walk around.
To have a room to feel safe in this fuckin' town.
I couldn't run couldn't hide couldn't help myself.
I had to not talk about the way I felt.

A perfect messenger of Iran’s young women trying to get their frustrations out, although Afsharian herself knows she wouldn’t be the first choice as a representative of her generation.

“I would really love to perform here, but at the moment I’m not sure I have enough of an audience. Even if I had the opportunity, I don’t know if many people here are really interested in my music,” she said.

Contrary to homegrown musicians in most countries who gain local notoriety before ever even dreaming of making it big, Afsharian said that the majority of her fans are outside of Iran, adding in her unavoidably contrarian fashion, “It’s not that strange. Most ordinary people here look at me like a weirdo. So it’s not really surprising.”

Bomrani is a group that plays, “blues and country from America, from your country, but in Farsi,” according to guitarist Jahan Qorbani, 24. Bomrani's album “Yellow Sky Blue Sun” was recently accepted by iTunes, demonstrating the widening appeal of music produced in Iran.

Although their lyrics often deal with the more mundane aspects of Iranian life, the mandatory military service for example, Bomrani’s sound is fun and the pleasure they take in playing has led to them being invited to play for more audiences in Tehran than some other acts.

The band’s lead singer and its namesake, Behzad Omrani, shuttles between Dubai and Tehran, as his band mates are unable to travel abroad.

All men in Iran must serve nearly two years in the country’s military and are not eligible to have passports until they have completed this compulsory service.

While playing live shows in Iran is a rarity, the opportunity is one that these acts cherish regardless of the obstacles they face, and in fact sometimes because of them.

“Once we were playing at a cafe, and it turned out it was one of the days that they were bringing martyrs back (remains of soldiers killed in Iraq war,)” Omrani said. “We were in the middle of a song and someone told us, ‘turn it off, turn it off!’ So we did. And all of a sudden there was total silence. Just then we saw the turbans of a couple of mullahs passing by, once they were gone we just picked up in the middle of the song. It was great!”

Iranian President Mahmoud Ahmadinejad has made playing modern forms of popular music more difficult in recent years, but harmonica player Mani Mozakka, who still wears a green ribbon around his wrist to show his personal support for last year’s protest movement says, “When a door closes, people open up another path. We’ll always find a way to keep doing what we do.”

This attitude is taking root in Tehran and it appears as though a growing number of musicians are choosing this less traveled path.

“I used to think if I leave Iran and go to live in some other country, I’d be really successful and I would find a way to do what I want to do,” Afsharian said. “But I changed my mind. You know, I found that I’m always inspired by Iran.”

The reflections offered by bands in Iran run counter to the now accepted story of Iranian underground music, as delivered by Iranian director Bahman Ghobadi’s 2009 film “No one knows about Persian Cats,” which introduced global audiences to Tehran’s underground music scene.

The film paints a vivid picture of young musicians in the Iranian capital struggling to produce their art, constantly searching for reliable places to record, but ultimately failing to do so, instead hopelessly looking for escapes to Western countries, where presumably they would be free to perform.

Such themes work well with long-standing perceptions of Iran as an impossibly intolerant society, but to artists still working inside the Islamic Republic, the victimization does them no justice.

“We don’t have it as bad as the characters in that film,” Jabbari said. “We do this for the sake of music, and for that we went through some hardships, and we’d like more people to know about it.”