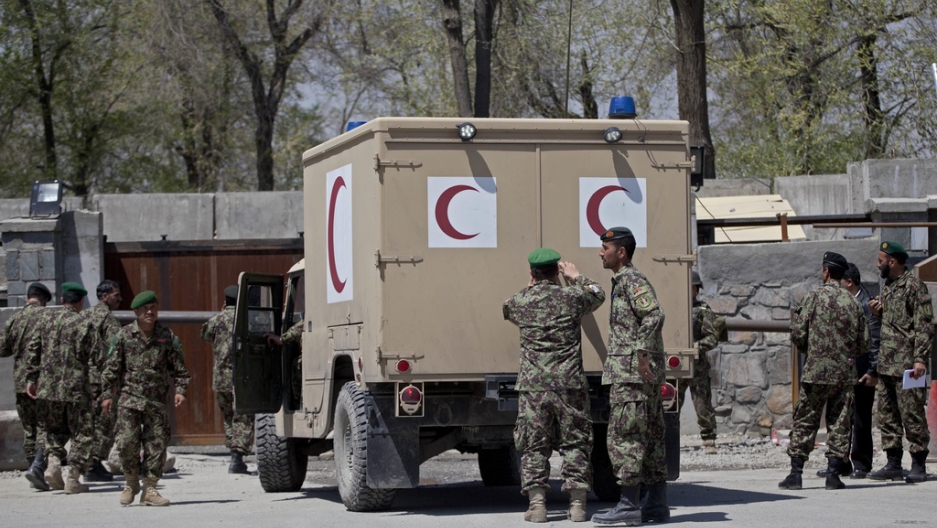 KABUL, Afghanistan — Yesterday marked a significant milestone here in the Afghan capital. The Taliban managed to penetrate into the heart of the Defense Ministry.

An armed man with an Afghan Army uniform and a valid ID managed to gain access to the offices of the Minister himself, killing 2 and injuring 7 before being shot by bodyguards. According to Defense Ministry officials, the attacker never managed to detonate the explosive vest he wore, although some local media had reported an explosion.

Defense Minister Abdul Rahim Wardak, the presumed target of the attack, escaped harm because he was not in the building at the time. French Defense Minister Gerard Longuet, who is visiting Afghanistan and was also a tempting objective, was also out of range.

But the attacker was not an imposter at all. He was a bona fide member of the Afghan armed forces, a fact that has sent shockwaves through the military establishment here. Worse still, the Taliban are publicly gloating that they have another 150-200 infiltrators in Afghan institutions, just waiting to pull the cords on their suicide vests.

It may be true; it may be a bluff. But after yesterday’s attack it has the advantage of paralyzing the government while everyone frantically searches for traitors.

The panic is undoubtedly heightened by the fact that this was the third such attack in four days: on Saturday, a man in an army uniform killed five foreign and five Afghan troops in Jalalabad; the day before that a man in a police gear assassinated the chief of police in Kandahar.

Nevertheless, the Afghan Defense Ministry was at some pains to downplay yesterday’s incident, saying that everything as under control.

At the opposite end of the spectrum were the Taliban, who boasted that the attack had “rocked the Ministry of Defense in the heart of Kabul City.” According to Taliban spokesman Zabiullah Mujahed, 18 persons were killed, including four high-level NATO officials. These figures are unlikely to be substantiated.

Mujahed also named the attacker, the “martyr” Asadullah, “a resident of Panjsher who had been in the puppet army for the last three years.”

I do not often think of Kabul as a war zone. It has been my home for almost seven years, and I almost never feel threatened or anxious on its streets.

That might be a mistake. The Taliban are getting bolder, and seem eager to demonstrate their extended reach. In the past few months we have lost a popular supermarket and the central shopping mall to suicide attacks.

There have been attacks on military bases just outside the city, and now the insurgents have managed to gain access to the symbolic heart of Afghanistan’s military – the office of the Defense Minister.

“They are trying to sabotage the transition,” said my Afghan colleague, speaking of the transfer of authority to Afghan defense forces that began in March. The first phase, encompassing seven sites including Kabul and the northern capital, Mazar-e-Sharif, is scheduled to be completed by July, just in time for the beginning of the planned U.S. withdrawal.

The U.S. forces and the EU Police Mission say that the transition is on schedule, and that the Afghan National Security Forces are coming along nicely, and will be ready for the responsibility when the time comes.

But following the security forces’ less than stellar performance during the Mazar riots that killed 12, including seven UN personnel, many are getting understandably nervous.

It is difficult to gauge the threat level in Kabul these days. Things have certainly deteriorated from my first months here, when we walked all over town without a care, traveled to most provinces without worry or escort, and felt that Afghanistan was on a smooth if lengthy road to stability and prosperity.

Such optimism is in very short supply these days. But panic has yet to set in.

They say that if you try and put a frog in a pan of boiling water, it will immediately sense the danger and jump out. But place the poor amphibian in cool liquid, and slowly raise the heat, and it will stay until it is cooked.

The anecdote is more metaphor than science. But I wonder, at times, whether something similar isn’t happening with those of us who live in Afghanistan. Lulled by a false sense of security, or memories of happier times, we may ignore the advancing whirlwind until it is too late.