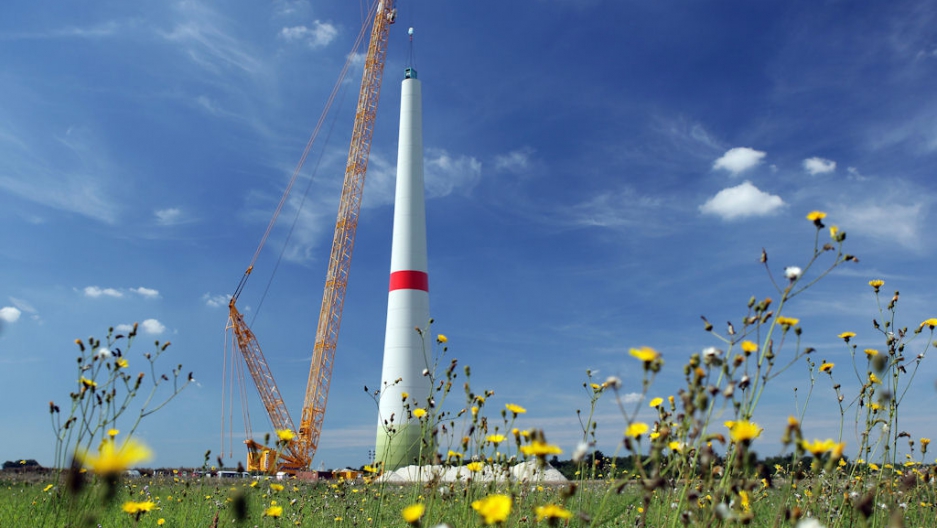 Cranes stand next to a row of wind turbine masts under construction on Aug. 20, 2010 near Linthe, Germany.
Credit: Andreas Rentz
Share

BERLIN, Germany and BEIJING, China — In the rough and blustery North Sea, almost 30 miles off Germany’s coast, 12 wind turbines tower over the water, with rotors longer than football fields.

Like most wind turbines, those that make up the Alpha Ventus Offshore Wind Farm have gearboxes that transmit the power of the rotors to much faster-spinning cogs that generate electricity.

The strain from wind turbulence makes these gearboxes the most fragile part of the turbines and a true engineering headache.

Six of the Alpha Ventus gearboxes are made by Renk, a 130-year-old engineering company based in Augsburg, southern Germany. The three decades in which Renk has been involved with wind turbines haven’t always been easy, said Toni Weiss, general manager of Renk’s industrial gear division. But he estimates the firm is now five to seven years ahead of most rivals.

“It hasn’t always worked perfectly … there have been hiccups. But we feel quite at home in this field," Weiss said. "There was discussion in the political arena about whether wind is something that really helps us and if it is really efficient, but … these arguments have disappeared and there is hardly anybody now who says wind turbines are not worthwhile.”

It’s an illustration of how Germany is powering ahead when it comes to investment in renewable energy. Europe’s biggest economy doubled its investment last year to reach $41.2 billion. In doing so, it bumped the United States out of second place as an investor in clean energy technology, according to a recent Pew Charitable Trusts report that shows America is in danger of slipping behind.

The observation among experts in the field is unanimous: The United States offers potential green investors uncertainty while countries like Germany and China have sent clear signals that they support such technology.

“Given uncertainties surrounding key policies and incentives, the United States’ competitive position in the clean energy sector is at risk,” the Pew report concluded.

The Chinese government, by comparison, has issued clearly stated directives from the very top to increase green technology.

“We will actively promote changes in the way energy is produced and used and raise energy efficiency,” Premier Wen Jiabao said in his annual address to the National People’s Congress in March. “We will give impetus to the clean use of traditional energy sources, intensify the construction of smart power grids, and vigorously develop clean energy.”

His words sent a clear signal that China’s clean energy development sector is open for business.

“With aggressive clean energy targets and clear ambition to dominate clean energy manufacturing and power generation, China is rapidly moving ahead of the rest of the world,” the Pew report said.

Or as Deborah Seligsohn, an energy specialist from the World Resources Institute, told the House Subcommittee on Energy and Power earlier this month: “Chinese economic strategists recognize that China was late to the industrial revolution and even late to the IT revolution, but it believes it can be a leader in a green revolution.”

Similarly, the German government’s clear support for renewable energy has made it a safe bet for investors, said Claudia Kemfert, an energy expert from the German Institute for Economic Research in Berlin.

Instrumental to the success has been its “feed-in tariffs,” backed by political consensus, whereby utility companies are compelled to buy clean energy at an inflated price. A family with solar panels on their roof can sell any spare electricity to the grid, while another family down the road pays a slightly higher price for grid electricity to subsidize the clean energy producers.

In about two weeks, Germany will unveil its third offshore wind farm, this one in the Baltic Sea. “Baltic 1,” as it is named, is part of a 3 billion euro ($4.3 billion) investment by utility company EnBW Energie Baden-Wuerttemberg, which aims to generate 20 percent of its energy from renewable sources by 2020.

“It’s one of the biggest things that’s happened for Germany in wind energy,” said Kristina Koebe, who heads a wind energy advocacy group based in Rostock on Germany’s Baltic coast. “We’re hoping that this will be the next step forward in really increasing the share of renewable energy.”

Indeed, it is a sufficiently big deal that Chancellor Angela Merkel will help with the launch on May 2. Although German governments have generally been strong advocates of clean energy, Merkel last year took a gamble and shifted her support to the nuclear industry — a move that backfired badly when the public turned sharply against her in the wake of Japan’s Fukushima distaster.

Merkel, who critics say tends to blow in the wind herself, is eager to bolster her renewable energy credentials. Her government is now scrambling to develop a policy to fast-track Germany’s exit from nuclear power and focus on clean technology — a political imperative that will only strengthen the sector. Environment Minister Norbert Roettgen and Economy Minister Rainer Bruederle last week released a six-point plan to transfer from nuclear to renewables, including a 5 billion euro ($7.2 billion) boost to offshore wind farms.

Quite apart from the environmental, let alone the political, considerations, clean energy advocates argue it is plain business sense.

“The renewable energy sector is very important to Germany — across industry. In order to install a windmill, you need steel production. In total, an additional 360,000 jobs have been created in the renewable energy sector alone. In total, climate protection, including material efficiency, sustainable mobility, green buildings etc., will create more than 1 million new jobs,” Kemfert said.

“Investments will be up to 200 billion euros in the next 10 years. Most of the investment will come from the private sector. This will create jobs and a strong renewable energy sector.”

Giving the businessman’s point of view, Renk’s Toni Weiss said that investment in the United States is not going to grow as fast as other countries until it offers better tax breaks.

“If you look back to the past, you will see you have a direct correlation between tax benefits and investment," he said. "The U.S. doesn’t have many tax benefits for wind energy and they don’t make much investment.”

China, on the other hand, has included “green development” in its five-year plan for economic and social development, making it clear that the country plans to be a global leader in the sector.

Pew predicted that even with aggressive venture capitalists on board, other countries like the United States “will have substantial difficulty keeping pace with China.”

Yang Fuqiang, senior adviser on climate and energy for the Natural Resources Defense Council in China, said the precise language of the five-year plan, requiring improvements in energy efficiency, sent a clear signal to investors.

“It’s a mandate. It’s not a requirement or a target,” he explained. “For investors, this means the situation is secure.”

The situation in China is also urgent, as the country remains one of the world’s leading polluters and the largest producer of climate-change causing carbon emissions.

Yang noted there are further targets within the five-year plan to reduce reliance on coal as a power source from the current 70 percent to 65 percent within the next five years. Coal is still the leading source of power in Germany as well.

“Even though they put a lot of effort into developing renewables, it’s still not been enough to meet the demands of the energy sector,” Yang said.