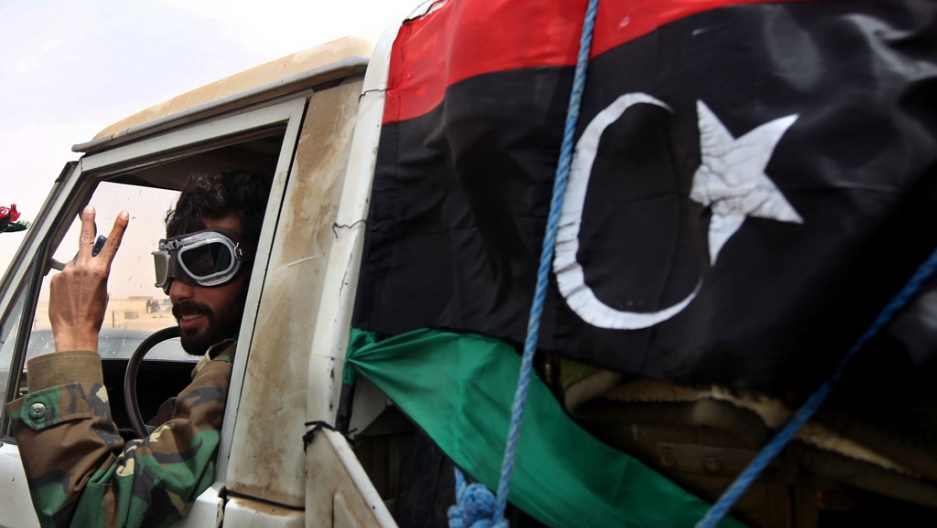 A Libyan rebel flashes the V-sign as he leaves the eastern town of Ajdabiya, on April, 17, 2011, following heavy fighting against forces loyal to Libya's Muammar Gaddafi.
Credit: Marwan Naamani
Share

Muammar Gaddafi's forces have intensified their assault against rebels in the strategic eastern town of Ajdabiya as concerns mounted over the plight of civilians in the besieged western city of Misurata.

One month after international air strikes began enforcing a U.N.-mandated no-fly zone over Libya, British officials warned of a "dire" humanitarian situation, but ruled out an intervention by ground troops.

Using several days of sandstorms as cover from the air strikes, Gaddafi's troops have been able to make advances on Ajdabiya, the last major town on the road to the rebel stronghold of Benghazi.

Under a barrage of heavy shelling, the few remaining families fled the town, while rebel trucks equipped with heavy machine guns were also seen in apparent retreat.

Misurata also suffered renewed attacks. Reports put Sunday's fatality figure in the city between six and 17, in what doctors told the Los Angeles Times was a relatively quiet night.

Desperate to evacuate the city, more than 50 families blocked the road to the port on Sunday ahead of the arrival of a boat due to carry away 1,200 migrant workers.

The LA Times said international relief officials delayed the arrival of the boat, fearing panic as people clamored to board the vessel to escape the fighting.

With food, water and medical supplies in short supply in Misurata, there were international calls to step-up humanitarian assistance to the city.

"Reports from within Libya indicate that the humanitarian situation in certain areas in western Libya, where international agencies have no access, is dire," Britain's Department for International Development said.

UK International Development Secretary Andrew Mitchell was to hold talks with U.N., officials about how to deliver more help to Misurata, the BBC reported.

"It is vital that we continue to get help, such as food, water or medical supplies, through to people," Mitchell said.

"Humanitarian agencies must be given free and unfettered access to Misurata and other areas affected by fighting."

British Prime Minister David Cameron on Sunday ruled out sending in ground troops to assist rebels after the air campaign has failed to tip the conflict in their favor.

"What we've said is there is no question of invasion or an occupation -- this is not about Britain putting boots on the ground. That is not what we're about here," he told Sky News.

"We are very clear we must stick to the terms of the U.N. Security Council resolution. We must keep the support of the Arab world and I think that is very important to make sure this is done the right way," he said.