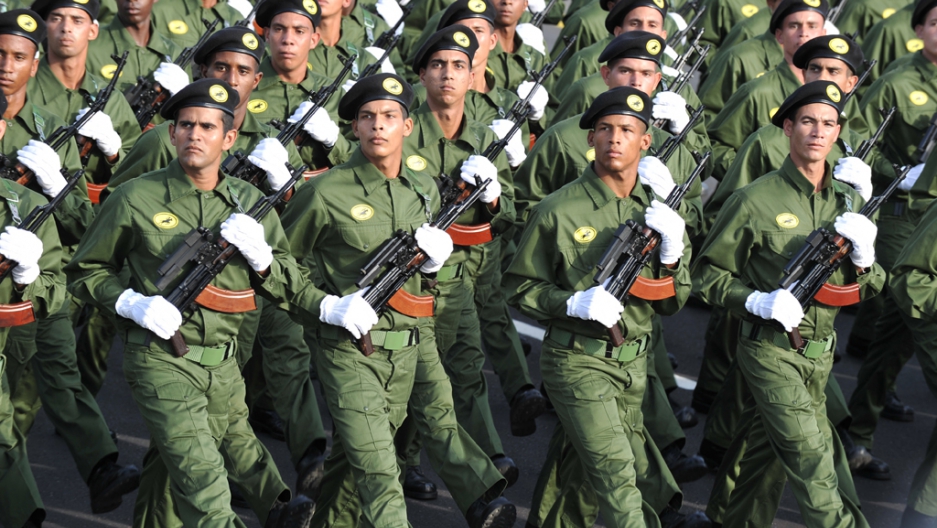 Cuban special forces march, on April 16, 2011 in Havana, during the military parade to commemorate the 50th anniversary of the Bay of Pigs and the beginning of the Cuban Communist Party 6th Congress.
Credit: Adalberto Roque
Share

HAVANA, Cuba — Fidel Castro flashed his true colors for the first time exactly 50 years ago, standing outside the Havana cemetery in a sea of rifle-toting militiamen and women.

Bombs had fallen on Cuban airfields the day before, killing seven — the start of the “Bay of Pigs” invasion — and as Castro rallied his countrymen to defend the island, he finally confessed to something he’d been denying for years.

“What the imperialists cannot forgive us for … is that we’ve made a socialist revolution right under the nose of the United States!” the 34-year-old Castro boomed, then went on to lead the counteroffensive against 1,500 CIA-trained Cuban exiles who would surrender just three days later. It was a turning point in Cold War history, leading directly to the Cuban Missile Crisis of 1962 and the 50-year standoff with the U.S. that followed.

Castro’s famous revelation has since been memorized by generations of Cuban schoolchildren as “the first proclamation of the socialist character of the Revolution” — the moment when the bearded leader gave up any pretense of masking his political agenda in hopes of keeping The Empire at bay.

Today, with Fidel officially retired and younger brother Raul running the country, Cuba is marking the anniversary of Castro’s declaration and “The Victory of Socialism” with a military parade and historic Communist Party Congress — the first since 1997 — whose very purpose will be to redefine what Cuba means by “socialism.”

On the table are some 300 reform proposals put forward by Raul Castro and his advisers, aimed at correcting the ruinous economic policies adopted by his older brother under the socialist banner. Nearly two-thirds of the proposals, or “guidelines,” have been amended in recent months, as Cubans were asked to publicly and candidly debate them in their neighborhoods and workplaces.

Whether those changes will push for broader economic reforms, or scale them back, is unknown.

More than 1,000 party members will gather for three days starting Sunday, and they are expected to rubber-stamp Castro’s broader goals of thinning the country’s bloated bureaucracy and spurring Cubans to work harder through a blend of benefit cuts and incentives.

According to Rafael Hernandez, editor of the Cuban journal Temas, the purpose of the Congress will be to “build up a new political consensus around reforms.”

“These are not the changes we had in the early 1990s,” he said, referring to the liberalization measures adopted after the collapse of the Soviet Union, some of which were later rolled back. “These are not emergency measures. They are part of a new blueprint for socialism,” he said.

The basic outlines of that blueprint will be a less-centralized government and an economy that balances state ownership with private initiative and “social property” in the form of worker cooperatives. But such reforms shouldn’t be viewed as an expansion of “the market,” Hernandez cautioned.

“The idea that there is no market in Cuba is wrong,” he said. “Anyone living in Cuba knows you have to learn how to move around six different kinds of markets. The problem is that we have an incoherent market system. We need to have a market system that provides goods at affordable prices for the majority of Cubans.”

The changes under consideration will still leave Cuba far short of the business-friendly brand of socialism that has transformed China and Vietnam in recent decades. Instead, many Cubans are simply waiting to see if the government will expand basic property rights — giving them the freedom to buy and sell homes, cars and other personal property, for instance.

“It seems that the authorities want to keep their control over the whole economy, but it’s impossible if they want to solve the main problems they have,” said Miriam Leiva, a dissident writer in Havana. “Cubans want to speak out and want to have a say in their future.”

But major political changes to Cuba’s one-party system are not in the offing. Instead, with Raul Castro set to replace his brother as the party’s First Secretary, Cubans will be watching to find out who is named the second-ranking leader.

The 79-year-old Castro could elevate a trusted ally from his inner circle, such as right-hand man and hardliner Jose Machado Ventura, 80. Or the position could go to a younger, technocratic manager, like economic reform czar Marino Murillo, 50. Several party officials from Cuba’s provinces are also viewed as politically ascendant.

Any younger figure designated No. 2 will likely be viewed as a top candidate to be Cuba’s future leader. But if the position goes to another aging stalwart like Machado Ventura, the appointment may be seen as simply a placeholder.