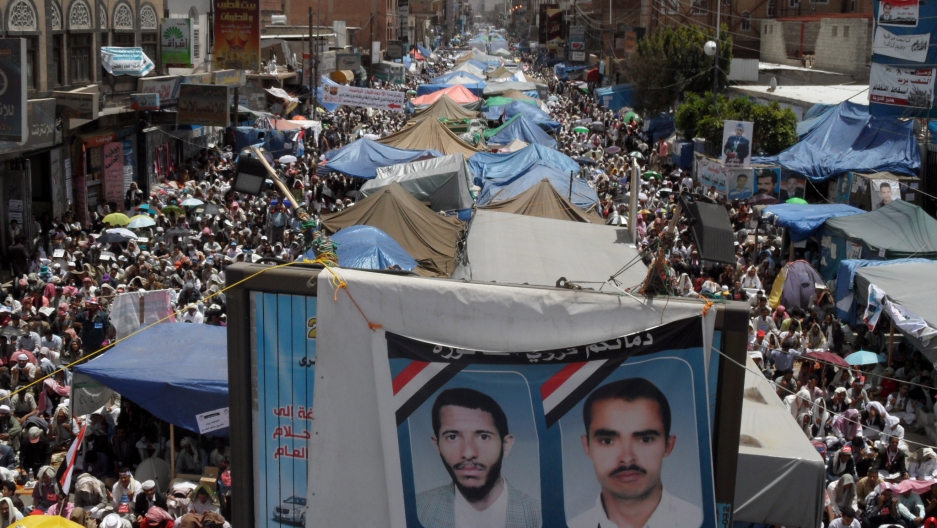 Thousands of anti-regime Yemenis demonstrate against President Ali Abdullah Saleh, with pictures of "martyrs" in the foreground, outside Sanaa University on Friday Apr. 15, 2011, the Muslim day of prayers and focus for political rallies in the Arab world. The demo comes a day after influential tribal and religious chiefs in Yemen abandoned the increasingly isolated president.
Credit: Gamal Noman
Share

SANAA, Yemen — Yemeni President Ali Abdullah Saleh remained defiant Friday in the face of calls by Yemen's influential tribal leaders to step down, telling a large crowd in the capital Sanaa that he will stay in office.

In a statement published Friday, tribal chiefs sided with the two-month-old uprising, calling for Saleh to step down "immediately."

"[The president] must respond to the demands of the peaceful revolt of the youth, starting with his immediate departure and that of all his aides in the military and security apparati," the chiefs said after a meeting, Agence France-Presse reported.

For the eighth consecutive Friday, nearly 100,000 pro-democracy protesters took to the streets in the Yemeni capital of Sanaa to demand an end to Saleh’s 32-year rule.

As more and more Yemenis take to the streets, there is a growing concern that civil unrest in Yemen may force the already fractured state into chaos, allowing for Al Qaeda in the Arabian Peninsula to use the country as a launching pad for attacks against the West.

However, Yemen’s revolutionary movement seems to be uniting several of the country’s disparate groups.

Rival tribes, the Houthi rebellion in the north, and the secessionist movement in the south are setting aside old grievances and are rallying around a single cause: the ouster of Saleh.

The Yemeni government has been struggling for almost two decades to reign in the rebellious south following a civil war in 1994. United in 1991, the former Yemen Arab Republic and the People’s Democratic Republic of Yemen struggled to find a suitable balance of power in the newly founded, unified state. Following the civil war, the Saleh regime resorted to violent crackdowns to silence those from the south arguing that the northern part of the country maintained a monopoly on wealth, resources, and power.

However, with protests sweeping across the nation, many members of the Southern Movement are leaving the organization to take to the streets to face the familiar reality of tear gas and riot police in Aden, and joining their voices with those in the north demanding Saleh relinquish power.

“We don’t need to secede from the north once Saleh is gone. Our problems in the south stem from a corrupt government,” said Nuha Jamal, 25, a youth activist in Aden, the former capital of South Yemen.

“People are leaving the Southern Movement. We are all one is demanding that Saleh leave power. All of Yemen is united in this cause,” she said.

While cracking down on a secessionist movement in the south, Saleh has also been locked into a series of wars with Zaidi (a sect of Shiism) rebels in Saada, Yemen’s northern governorate on the border with Saudi Arabia. Beginning in 2004 and continuing through 2009, The Yemeni military fought six wars against the Houthis. While the government claims that the Houthi rebellion wanted to reinstate North Yemen’s deposed Imamate, the Houthis felt that they were politically marginalized as well as being adamantly against Saleh’s close cooperation with the U.S.

The Houthi wars ravaged a sizeable swath of northern Yemen, creating one of the world’s largest populations of internally displaced people who face crises like widespread hunger and malnutrition. As the wars continued, the already meager healthcare infrastructure was devastated, worsening the humanitarian crisis.

In spite of the death and destruction the people of Saada have witnessed, many members of the Houthi rebellion have laid down their arms and have made the tented city know as Change Square in Sanaa their new home.

One Houthi leader, Ali Al-Emad, now lives under the protection of the defected 1st Armored Division in Change Square, the same soldiers that besieged Saada for over five years.

“Our vision is clear and we share this vision with all of Yemen. We call for a civil state and equal citizenship for all Yemenis. We demand true democracy,” he said.

Many Houthis feel that once there are included in the political process, there is no need for war.

“We tried to create our own sovereign state in Saada but now we are calling for unity and equal rights for all Yemenis,” Al-Emad said.

Al-Emad also welcomed the defection of Yemen’s top military commander, Ali Muhsin Al-Ahmar, in spite of the fact that he was the commander of the government’s military forces in their wars against the Houthi rebels.

“I met Ali Muhsin and I welcomed him. We are grateful for his protection,” he said.

All of Yemen’s civil strife in recent years is set against a backdrop of large portions of rural Yemen where government control is almost unheard of. North Yemen’s tribes have always wielded more power than the country’s government and force the country’s political leadership to curry favor with influential tribes.

Now, many rival tribes are even sharing tents in Sanaa’s Change Square.

Two rival tribes from the troublesome Abeeda and Morad areas in the Marib governorate have set aside their old enmity and joined each other in Sanaa.

“When tribes fight over land or take revenge for murdered relatives, Saleh smiles. This unrest simply enables his corruption to continue,” said Nasser Al-Qadhi, a sheikh from the Morad tribe in Marib.

“We’ve learned to forgive each other so we can join together to drive out this devil and take our country back from the hands of corruption. Once our new Yemen begins, we will turn our weapons over to a government that we trust to protect us,” Qadhi said.

As tribal law trumps government control in a large portion of rural Yemen, many rival tribes often clash over territorial claims or become locked into lengthy revenge battles when a member of one tribe kills another. Such periodic unrest and a lack of government control in rural areas is what has enabled Al-Qaeda in the Arabian Peninsula to operate in governorates such as Shabwa, Abyan, Lahj and Marib.

However, many Yemenis feel that Al Qaeda is a by-product of the corrupt Saleh regime.

"Al Qaeda will not threaten Yemen any longer. The tribes have now joined the pro-democracy movement, leaving AQAP without protectors or a refuge. Once the regime falls, AQAP will disappear,” he argued.

— Freya Petersen in Boston contributed to this report