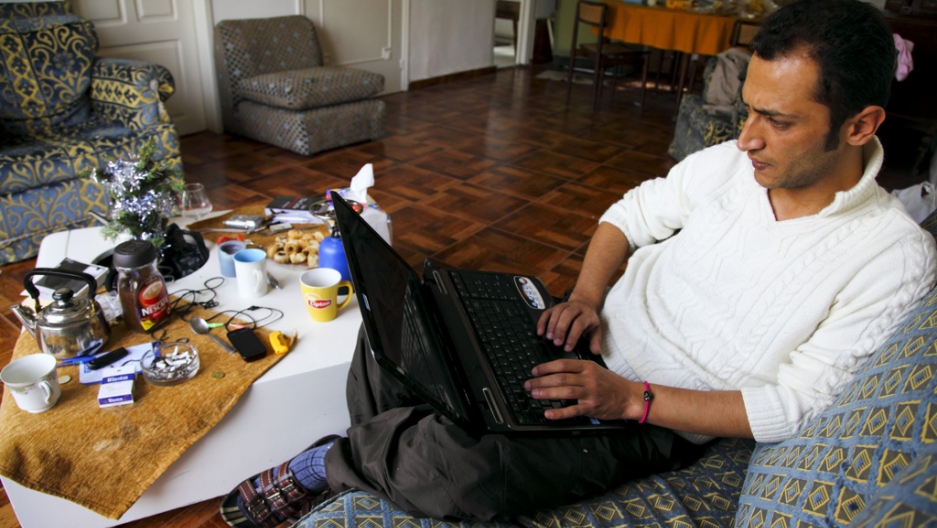 BEIRUT, Lebanon, and DAMASCUS, Syria — He’s got multiple cell phones and pseudonyms, a dangerous addiction to nicotine and when his laptop is open, which it always is, his fingers dance across the touch pad in a mad ballet of digital information sharing.

“That was AP calling,” said Syrian cyber activist Rami Nakhle, about the international news agency whose competitor Reuters was recently expelled from Damascus for reporting on the Syrian uprising. “They wanted us to confirm with video. Confirm with video? Not yet! I mean, come on!”

Known as Malath Omran until his real identity was made public last week by the Syrian secret police, Nakhle is one hub of a growing and impressively organized network of activists using social media to break the bonds of Syria’s police state and publish news and images of the unprecedented protest movement against the regime.

Having fled Syria after a tip off that he was about to be arrested, Nakhle now lives across the border in a safe house in Beirut. Despite concerns for his family, Nakhle said he is unable to return home. On his Facebook wall, the activist recently received a threat he believes came from Syrian security warning that if he did not renounce his support for the uprising, his sister would be arrested and his family targeted.

During last Friday’s protests, tens of thousands of Syrians took to the streets to demand freedom in cities across the country, many calling for the toppling of President Bashar al-Assad, whose family has ruled the country for 40 years. At least 26 protestors were killed by Syrian security forces in the southern city of Deraa. On Wednesday, the protest movement appeared to be spreading to more Syrian cities, including Aleppo, the country's second largest.

Along with further deaths at funerals over the weekend, the total number of Syrians killed in three weeks of mostly peaceful protests now numbers more than 200, according to Syria’s National Organization for Human Rights.

Nakhle’s job is to use social media and technology to link the protestors on the street, shooting video on their mobiles, with the outside world. Many of the cities where protests have taken place are now under a military lockdown, with mobile phone and internet cut, and access restricted. Foreign media have been barred from Syria and dozens of journalists, local and foreign, arrested or expelled. In their place, Syria’s cyber activists are making sure reporting still gets out.

Nakhle’s flat looks just like what it is: A bunker in wartime. Huge packs of Arabic flat bread lie half-eaten beside an oversized jar of Nescafe and enough drinking water for a fortnight. In the kitchen, pizza boxes stack up beside a sink full of used matte leaves, the fortifying Latin American tea loved by Syrians.

Every 10 minutes or so Nakhle’s laptop chirps with the sound of incoming Skype calls: CNN, Mediterranean International Radio from Morocco, the BBC, Human Rights Watch.

The internet phone system allows for anonymous users and its encryption is complicated enough to make it almost impossible for authorities to listen in on.

As Nakhle fields calls, his “Tweet Deck,” a platform for advanced Twitter users that looks something like a pilot’s navigation system, is humming and pulsing with messages from colleagues inside Syria.

The loose-knit team is divided into those who report and those who publish, the ground crew and the computer crew. Activists on the street in Syria’s major cities — Damascus, Homs, Aleppo, Lattakia and Deraa, where the protest movement began — gather testimony from eyewitnesses and feed it back to the computer crew who work to cross reference the information with other sources before sending out updates on Facebook or Twitter.

“Confirmed: Kurds in Qamishli chanting, ‘We want freedom, not citizenship’,” says Nakhle, without looking up. “Confirmed: demonstrations in Ras al-Ein.” Then, for the benefit of a confused journalist: “That’s on the border between Syria, Turkey and Iraq.”

He laughs and for a moment sits back on the sofa with a flash of his striking green eyes.

“‘Did you start to use Pampers yet?’” he reads from the screen. A Twitter follower of his by the name of “I Love Syria 2011” has been sending Nakhle regular taunts, this one inquiring if the 26-year-old activist is scared enough to suffer an involuntary bowel movement.

“That’s what he Tweets me!” Nakhle laughed.

But the smile soon disappears with updates from Duma, a suburb of Damascus that has been a center of the protest movement. “Some martyrs fell in Duma,” says Nakhle, holding his face in his hands. “Now there’s a call for doctors.”

Syria’s online activists are a varied bunch, including all the nation’s major communities from Sunnis to Christians to Druze to Alawites.

Those directly involved in the activist network are generally young, in their 20s and 30s, tech-savvy, highly motivated and adept in English. Some are journalists with training in international standards of reporting. Some are professionals: lawyers, doctors, engineers.

Some are either banned or fear arrest in Syria and so continue their work in Beirut, Washington, London, Paris and elsewhere. Many are in Syrian prisons, but many have still to be caught and so use their time on the street to gather the images and reports that the regime does its best to make sure no one ever sees.

Yet for all their motivation, Syrian activists agree on one thing: The protest movement in Syria would be nowhere without the revolutions in Tunisia and Egypt.

“I didn’t know the meaning of freedom of speech until I saw the cyber activists in Egypt and Tunisia,” said a 26-year-old Syrian activist based in Damascus who uploads YouTube footage shot on mobile phones or hidden cameras during each protest.

Reporters Without Borders lists Syria as one of 10 countries that are active “Internet Enemies.” Hundreds of websites remain blocked, the majority of them run by political movements perceived to be opposed to the regime in Damascus.

Until last month, Syria held one of the eldest and the youngest political prisoners in the world, 82-year-old Haithem Maleh, a veteran human rights campaigner who was released, and 19-year-old student blogger Tal al-Mallouhi, who remains behind bars.

“Many of my friends were arrested in the last few days, especially the activists behind the computers,” said Razan Zeitouna, a lawyer and human rights researcher who has played a key role inside Syria connecting activists with the media outside. She’s been interrogated many times by the secret police. “Each time they tell me, ‘This is the last time you get out. Next time you’ll never see the sun again.’”

But, like other activists, Zeitouna insists the fear she feels is not for her own life but for the life of the historic movement she has played a part in driving forward.

“We lost 150 youths. I cannot deal with losing so many in our mission,” she said, pausing for a moment. “The thought of us not achieving our goals would mean it had all been for nothing. That’s what makes us scared.”

A second GlobalPost reporter, who cannot be named for security reasons, contributed to this article from Damascus.