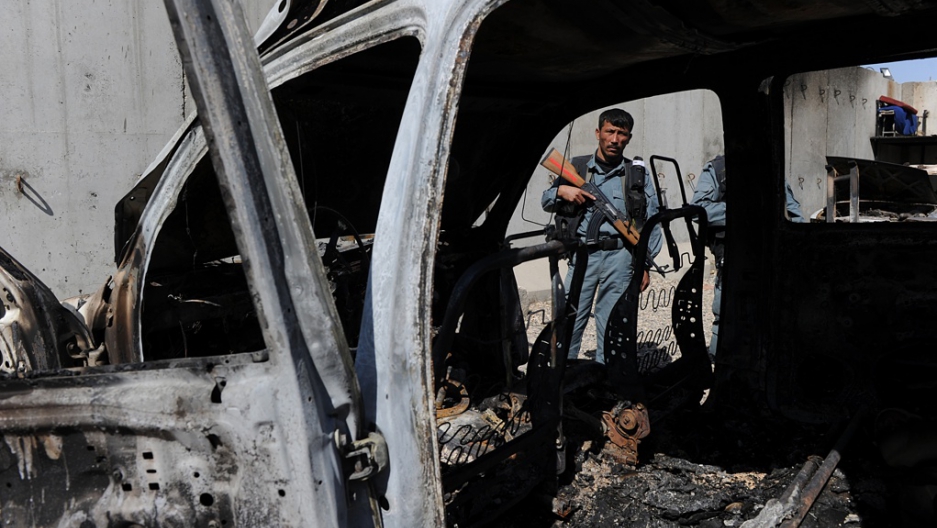 An Afghan policeman stands guard near the charred remains of a vehicle at the UN headquarters after protesters attacked the compound in Mazar-i-Sharif on April 2, 2011.
Credit: Sham Marai
Share

MAZAR-E-SHARIF, Afghanistan — The explosion of violence in Afghanistan following Pastor Terry Jones’ burning of the Quran in Florida last month shocked the world. In the troubled aftermath, Afghan officials are trying to assess the damage and apportion blame, with the Taliban coming in for the lion’s share of responsibility.

But while it is tempting to attribute the carnage to insurgent activity, many experts inside the country disagree. The horrific events that took place in Afghanistan are due to more systemic flaws, they argue.

More than 20 people died, and more than 100 were injured in the protests that swept the country after news of the Quran burning reached Afghanistan. The most unsettling incident took place on April 1 here in the northern capital, Mazar-e-Sharif, where an angry mob stormed the United Nations compound after Friday prayers, killing seven U.N. personnel and at least five Afghans.

Mazar, capital of Balkh province, has traditionally been one of the safest cities in Afghanistan, with a booming economy and a fairly liberal population. The outburst of rage among the protesters had provincial officials scrambling to assign blame for the destruction to forces from outside Balkh.

In a press conference held just hours after the U.N. killings, the governor of Balkh, Noor Mohammad Atta, said that those responsible for the violence were from “other provinces, such as Herat and Kandahar.” He also attributed responsibility to “enemies of the Afghan government,” a shorthand for the Taliban, and promised to find and punish the guilty.

Gen. Daud Daud, police commander for Afghanistan’s northern provinces, also blamed the mayhem on “opposition infiltrators.” More than 30 people had so far been arrested, he said, and some had already confessed, but he declined to provide details.

Taliban spokesman Zabiullah Mujahed, however, denied that the insurgents had taken an active role in the events in Mazar.

“We support the people’s protests, but we were not directly involved,” he said in a telephone interview.

Some question whether the Taliban, who are drawn primarily from the Pashtun ethnic group, would be able to whip up a crowd composed mainly of Tajiks. Balkh has a predominantly Tajik population.

“In my opinion, the Taliban do not have the capability to destabilize security in major cities,” said Abdul Hadi Khalid, former deputy minister of the interior. “Some specific groups inside the government organize conspiracies to eject their rivals from power.”

Many suspect that the government’s eagerness to point the finger at the Taliban is a political ploy to distract attention from what appears to be the inescapable truth about the April 1 events: The Afghan security forces were incapable of controlling the protesters or preventing the violence.

This is doubly worrying given that Mazar-e-Sharif is slated to be one of the first major cities transferred to full Afghan security by July.

The demonstration on April 1 began from the Rauza, widely dubbed “the Blue Mosque” in the international press. According to security authorities, several thousand protesters poured out of the Rauza after Friday prayers, where mullahs had stirred emotions with fiery speeches condemning the burning of the Quran.

The Mazar Ulema, a council of religious scholars, had applied for permission to hold a demonstration after Friday prayers.

Mullah Abdul Hanan Hamed, acting head of Balkh’s Department of the Haj and Religious Issues, said that his organization had been aware of the planned protests. Hamed’s department issues local mullahs directives on Friday prayers, with bullet-point notes to aid them in writing their sermons.

“That day’s speech was supposed to be about the security transition,” Hamed said. “But in the letter we sent out to the mullahs we said that it was not a problem if they also condemned the burning of the Quran.”

The crowd was expected to march from the Rauza towards the site of the U.S. Consulate, to the west. But since the consulate is still under construction, the organizers changed plans at the last minute, directing the demonstrators to the U.N. compound a short distance away to the south.

Once there, they overwhelmed the guards, gained access to the premises, and went on a bloody rampage that resulted in at least 12 deaths and the destruction of much of the compound.

Maulawi Abdul Rauf Tawana, one of the organizers of the demonstration, openly blames the police, while also hinting that there were provocateurs among the protesters.

“It was not our job to take security for the demonstration,” he insisted. “That was the job of the police. We tried to identify the infiltrators, but the crowd was too big.”

Gen. Esmatullah Alizai, Balkh’s chief of police, did not disagree.

“We had deployed 200 police to ensure security during the demonstration,” he said “But the number of demonstrators was too large. We were told that they were heading to the U.S. Consulate, but then they suddenly turned towards the UN, and we were unable to control them.”

Security authorities in Balkh say there could have been as many as 10,000 demonstrators; other sources put the number closer to 4,000.

Maulawi Abdul Rahman Rahmani, a member of the Balkh Ulema and also a member of Parliament, said he was furious at what he perceives as the incompetence of the security forces.

“If there were a lot of demonstrators, they should have increased the number of police,” he said. He demanded that the security forces be held accountable for the deaths and destruction resulting from their failure to protect the population.

Former Deputy Interior Minister Khalid believes that the problem lies with the type of training the police receive. They have never been given instruction in riot control, he pointed out, since they have been primarily engaged in the fight against the insurgency.

“The main task of the police force is to keep public security, but they have been involved in military operations for the past nine years,” he said. “The police should have been trained to control protests.”

Eyewitnesses also remarked on the security forces’ surprising passivity in the face of the enormous crowd.

Aref Ahmad, a shopkeeper whose store is close to the U.N. compound, said the police were just not prepared.

“I saw another protest a few days earlier,” he said. “It was against the Iranian Consulate, which is also close by. About 30 police vehicles blocked the road more than 500 meters from the consulate, and more than 100 policemen stood guard. No one could get through. But in the demonstration against the U.N., there was no barrier, and the demonstrators were able to get to the gate quite easily.”

Mirajuddin, a student of the Asadiya madrassa in Mazar, was among the demonstrators. He is now in the hospital with a gunshot wound to the leg. He told GlobalPost that he had no idea that things would get so out of control.

“I went to Friday prayers and listened to the mullahs,” he said. “They told us to burn the American flag and an effigy of Terry Jones. But when we reached the U.N. compound, I heard gunshots.”

According to Mirwais Rabeh, the head of Balkh’s Department of Public Health, most of the dead and wounded were victims of gunshot wounds. The injured included high school students, members of the Ulema and boys from local madrassas, he added.

Staffan De Mistura, the U.N. special representative to Afghanistan, who visited Mazar a few days after the attack, discredited an initial report that two of the U.N. staffers killed had been beheaded.

One of the victims was killed by a knife, but not beheaded, Mistura told the media.

An unwelcome by-product of the violence has been a curtailing of some civil liberties in Balkh.

The governor has imposed limitations on demonstrations, asking citizens not to gather en masse at places like the Rauza. He has also issued directives for security personnel to confiscate all video and audio cassettes that contain material deemed “against the interests of the Afghan people and government.”

But residents of Balkh have reacted sharply to the restrictions.

“It’s clearly stated in the constitution that conducting demonstrations, protests and gathering are one of the rights of the people, and nobody can take their rights from them,” said political analyst Jawed Bakhtari. “And it is also mentioned in the constitution that responsibility for security rests with the police and the government. But now since the governor and the police have failed, they somehow want to cover this up.”