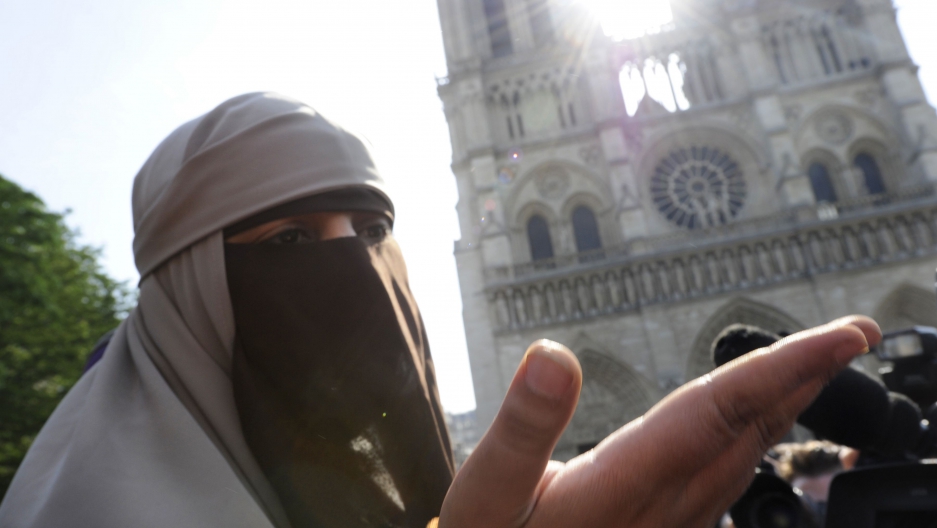 Kenza Drider, a young woman from the southern city of Avignon who has become the media symbol of France's tiny community of niqab wearers, speaks to the press during an unauthorized protest in front of Notre Dame cathedral against France's new ban on wearing full-face veils in public, on April 11, 2011 in Paris. Two women in niqabs were arrested.
Credit: Bertrand Guay
Share

French police have arrested two women protesting the introduction of a controversial law banning the full-face veil on the first day of the law's operation. The protest occured in front of Notre Dame cathedral in Paris, The Telegraph reports.

The full-face veil, often referred to as a burka or niqab, is now barred from streets, government buildings, public services, and entertainment venues. Offenders will be fined 150 euros (about $215) and ordered to attend re-education classes.

Anyone refusing to lift his or her veil to submit to an identity check can be taken to a police station, according to Agence France-Presse.

And in clause aimed at fathers, husbands and religious leaders, there are much more severe penalties for anyone found guilty of forcing someone else to hide his or her face "through threats, violence, constraint, abuse of authority or power for reason of their gender." They face a fine of 30,000 euros and a year in jail.

The new nationwide ban is the first to be enforced by an EU country. Efforts to introduce a similar ban passed in Belgium last year were derailed by a government crisis.

Islamic head scarves have been barred from French classrooms since 2004.

Proponents argue it is necessary on grounds of security, gender equality, and upholding France's secular system. Criticisms include that it violates rights such as freedom of expression and religion.

Representatives of French police officers foresee problems enforcing the law, as they have been given no power to use force to remove head coverings. "The law will be infinitely difficult to enforce, and will be infinitely rarely enforced," AFP quoted Manuel Roux, deputy head of a union representing local police chiefs, as saying on France Inter radio.

Regardless, on Saturday police arrested 59 people, including 19 veiled women, who turned up for a banned protest in Paris against the law.