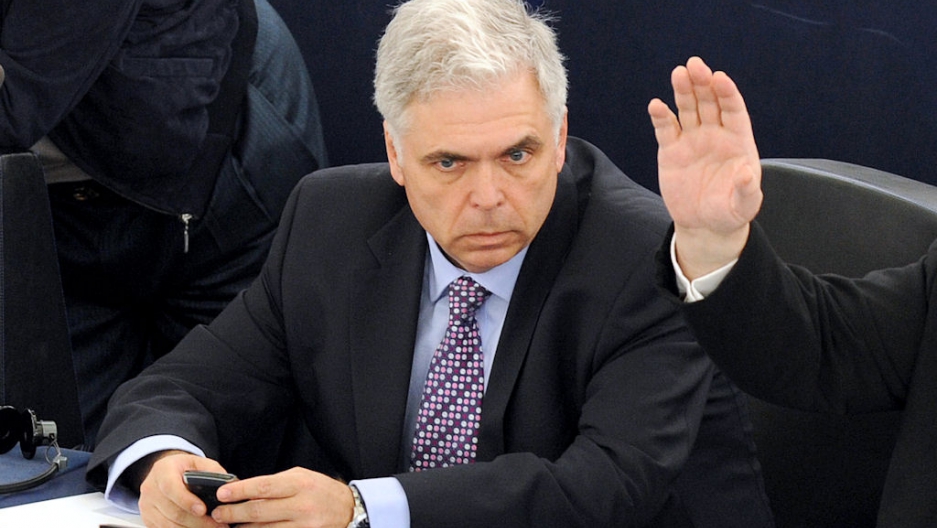 BRUSSELS, Belgium — On a scale of zero-to-Jack Abramoff, it barely rates a mention.

But for the European Parliament (EP), the current scandal is a doozy, involving members who went so far as to request amendments to legislation in exchange for promises of cash from lobbyists — lobbyists who turned out to be journalists from The Sunday Times investigating how much influence they could buy.

“We need to learn the lessons of this unhappy episode,” said EP President Jerzy Buzek.

“Episode” is an apt term, since video of some of the meetings between lawmakers and the fake lobbyists is available on the internet. Of the 60 MEPs the undercover reporters approached over an eight-month period, offering payments up to 100,000 euros in exchange for presenting amendments on banking legislation, they say 14 showed interest in continuing the conversations and four actually went through with it.

One of the most shocking elements of the scandal — now dubbed “cash-for-laws” or “cash-for-amendments” in the European press — is that most of the activity is perfectly legal.

One of the three said to have arranged for payment, Austrian Ernst Strasser, is seen saying “Of course I’m a lobbyist — and I’m open for that!” He enthusiastically describes building up his lobbying business through his work as a parliamentarian. Strasser resigned shortly after publication of the sting, but did not admit wrongdoing.

Romanian MEP Adrian Severin is the only one of the three MEPs exposed in online videos to stand his ground. He quit the Socialist and Democrats group under heavy pressure but has refused to resign, saying he did nothing wrong. His activities reportedly include invoicing the Sunday Times crew 12,000 euros for introducing their amendment.

Whether or not it is illegal, Buzek sees the behavior as distasteful.

“I am sure I am speaking on behalf of the majority of you, colleagues,” Buzek told the legislature, “when I say that we are determined to pursue a zero tolerance policy towards the kind of behavior that has led to the resignation of our colleagues.”

That may be overly optimistic on Buzek's part. How can he be sure a majority of the 736 MEPs, directly elected by citizens of the EU's 27 member states, are ready to give up lucrative second or third incomes?

There’s not the same kind of money in the European Parliament as there is on Capitol Hill, no pricey campaigns, no tradition of lobbyists wining and dining lawmakers. But what might surprise Washingtonians is that Brussels does not require legislators to refrain from lobbying. MEPs are allowed to hold second jobs — even as lobbyists/consultants/advisers/board members — as long as they declare them. They don’t have to resign from boards or divest of stocks after they're elected.

Even a new raft of proposed reforms, long under discussion but hastily put forward by Buzek in light of the Sunday Times scandal, would only require that “any actual or potential conflict of interest must be declared,” with any direct or anticipated financial interest made known “clearly and unequivocally in writing.” A declaration of interests for heavily involved lawmakers like Dehaene would have to be submitted “much more regularly than once a year,” Buzek recommended.

Some watchdogs have voiced their dissatisfaction with the recommendations. The Alliance for Lobbying Transparency and Ethics Regulation (ALTER-EU) calls the plan “clearly insufficient" and insists that conflicts of interest must be prevented, not just reported. In addition, the group, which represents 160 organizations, wants new rules to “curb the revolving door” between parliament and lobbying firms, as well as more ethics rules, including strict limits on items or hospitality that may be accepted from lobbyists, such as exist in the United States.

“We’re going through some real growing pains here,” said telecommunications lobbyist Caroline de Cock, who has just published a book on EU lobbying and maintains websites promoting transparency on all sides. “We’re suddenly discovering that we can’t just improvise anymore and hope that everyone acts with common sense and ethics because you know what? Common sense and ethics aren’t universal values.”

De Cock said she has even found her access to lawmakers blocked on occasion by “assistants” at the parliament who she later finds through extensive research are also employed by players on the opposing side of her issues.

The British Conservative party isn’t waiting for Brussels to reform and has instituted its own measures voluntarily, including listing members’ meetings with lobbyists online. But at the moment, it's not even clear who is a lobbyist: the registration system is voluntary. That system is due for some change in the near future, as the European Commission has just agreed with EP on establishing a joint “transparency register,” which will still be voluntary.

While Buzek has pledged that the EP will cooperate with investigations into the Sunday Times' bribes and whether MEPs broke laws, he has also refused to let the EU’s Anti-Fraud Office enter the sealed offices of the accused lawmakers. He says national authorities, rather than the EU, should handle the probe, and that for the time being, Brussels institutions must respect the immunity from prosecution that comes with an MEP job.

In Severin's case, Romanian authorities on Wednesday asked the EP to strip him of that shield so they could move ahead with just such an investigation.