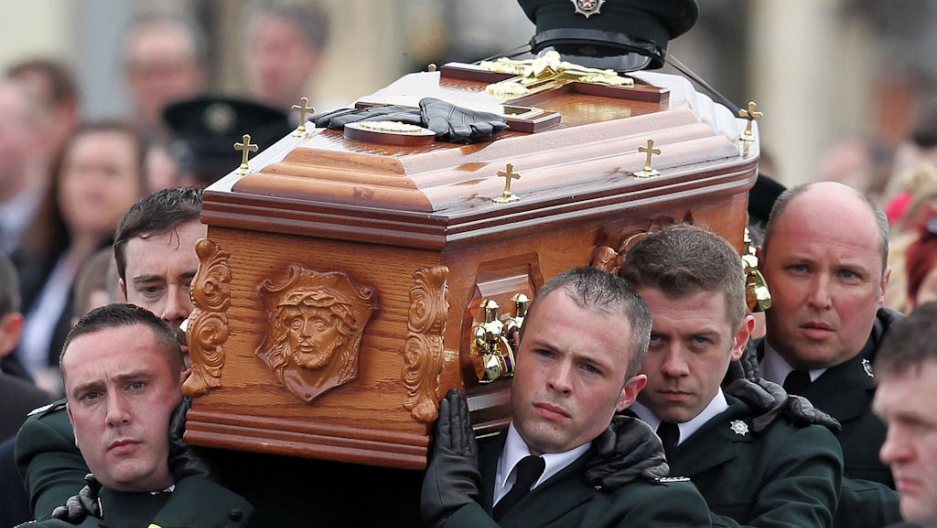 Police officers carry the coffin containing the remains of their colleague Police Constable Ronan Kerr to the church of the Immaculate Conception, in Beragh, Northern Ireland, on April 6, 2011.
Credit: Peter Muhly
Share

Leaders of the main Northern Irish political parties and religions, along with political leaders from the Irish Republic, came together for a requiem mass for Kerr in the tiny County Tyrone village of Beragh (population 520) where he grew up. Among them was Northern Ireland's first minister, Peter Robinson of the Democratic Unionist Party, attending a Catholic service for the first time in his life — a gesture that was warmly welcomed by the Catholic community. Beside him was the deputy first minister, Martin McGuinness of Sinn Fein, a former IRA commander in Derry, attending for the first time the funeral of a slain police officer.

The symbolic display was designed to show that the methods of the tiny group of violent republicans believed responsible for the bombing are rejected by people of practically every political opinion on the island.

Kerr's coffin was carried along Beragh's main street by members of the local Gaelic Athletic Association (GAA) football club, the Red Knights, to which Kerr belonged. Until 10 years ago, before the Northern Ireland police force was reformed under a power-sharing arrangement, the nationalist GAA refused to allow police officers to be members.

Halfway along the street, the wooden casket with the victim’s police cap and gloves on top was passed by the GAA members to six pallbearers from the Police Service of Northern Ireland. For the last stretch of road it was carried by six leading members of the GAA, including the organization’s all-Ireland president, Christy Cooney.

Ronan Kerr had graduated as a police officer just weeks before he was killed when a bomb placed beneath the driver’s seat of his car exploded as he drove away from his home in nearby Omagh. The killing horrified people in both parts of the island who hoped that the violence of the Troubles, which took the lives of over 3,500 people between 1968 and 1998, had been consigned to history. Kerr's killing was clearly intended to intimidate Catholics from joining what was previously a largely Protestant police force called the Royal Ulster Constabulary (RUC). Since the force was reformed it has attracted 30 percent Catholic membership and has the backing of Sinn Fein, which previously supported the IRA's campaign of violence against the security forces.

Robinson is a member of the Elm Pentecostal Church in Belfast, which is theologically opposed to its members attending a Catholic mass. He explained that he was attending mass for the first time as it was crucial that the political establishment stand united in opposition to the violent dissidents.

"I want to lay my respects to Ronan for the task that he has performed, for the fact that he was indicative of the new Northern Ireland — a willingness to serve the community,” he said.

Sitting nearby in the pews of Beragh’s 27-year-old Church of the Immaculate Conception was Ireland's Presbyterian moderator, Rev. Dr. Norman Hamilton, also attending a Catholic mass for the first time.

Local people in the mainly nationalist village also came out to show they did not want to go back to the past. Shortly before the funeral I came across Noreen Dean, as she tended the grave of her recently deceased mother in the tiny graveyard of black granite headstones beside the church. She said she had just returned to her home district after 26 years living in England because she believed the peace had returned and was permanent.

She arrived on Wednesday last week, and bought a house on Friday. On Saturday her sister Carmel called her with the news of the bomb.

"Nobody wants this," she said. "People want a good life, a peaceful life. This has brought all the community together."

Local priest John Skinnader recalled in his homily being stopped by Kerr at a traffic checkpoint in Enniskillen: “Seeing him sitting behind the wheel of a police car I said to myself, ‘There is the new face of Northern Ireland.’ He wanted to be ... working for the good of the entire community.”

There was lengthy applause when Cardinal Sean Brady, head of the Catholic Church in Ireland, told the congregation that the presence of so many politicians from both parts of Ireland and the wave of condemnation showed that Ronan Kerr did not die in vain.

Traditional attitudes still prevail in some parts of Northern Ireland however. Brian McClung, a Free Presbyterian Minister in Newtownabbey, County Antrim, said that Robinson had "dishonored Jesus Christ" by attending a Catholic Mass.

And the continuing threat from dissidents was underlined by graffitti in the nationalist Bogside area. One slogan, referring to the killing of Kerr and another PSNI officer shot dead in Craigavon in 2009, stated in white paint: “2 DOWN, MORE TO COME’. The graffitti was quickly removed by community groups.

Late Tuesday police arrested a 26-year-old Northern Ireland man in Scotland in connection with the killing of Kerr. Police also said they had found four rifles, detonators, components of rocket launchers, incendiary bombs and explosives in stolen cars located in a garage in Coalisland, less than 20 miles from Beragh.