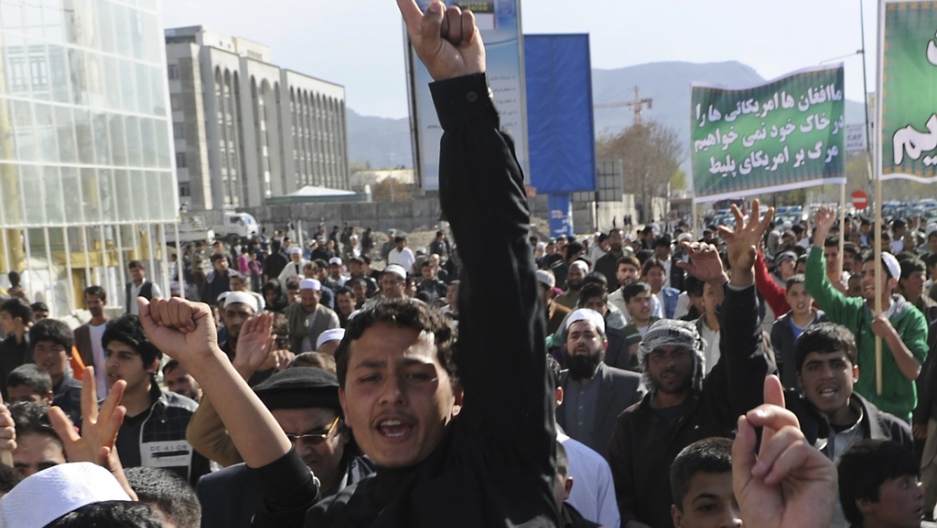 Afghans in Kabul protest the burning of the Koran by a pastor in Florida, April 1, 2011. On the same day a mob stormed the U.N. compound in the northern city of Mazar-e-Sharif, killing at least seven.
Credit: Shah Marai
Share

The killing of at least seven United Nations workers by an angry mob in Mazar-e-Sharif has inspired universal shock and horror. It should also arouse a deep uneasiness about the future in Afghanistan. This country, which has endured so much over the past 30 years, is now showing a distinctly hostile face to the rest of the world.

The burning of the Quran by a rogue pastor in Florida may have served as the spark that set off this particular conflagration, but the conditions have been building for quite some time.

The killing of nine Afghan children by U.S. helicopter gunships in Kunar in March; the murder of Afghan civilians by U.S. soldiers, with accompanying photos on the internet; and 10 years of an American presence have all deposited copious powder into this keg. An explosion was just a matter of time.

It is characteristic of Afghanistan that it was the insult to Islam that provided the trigger.

A slight to the Quran — the most powerful symbol of their religion — moved thousands to violence.

It is a bit odd, and doubly daunting, that the bloodshed began in what has traditionally been one of the safest cities in Afghanistan.

Mazar-e-Sharif, the capital of the north, has always been a much more relaxed place than Kabul. One could stroll around the Rauza, or Blue Mosque, visit the bazaar, go out to Afghan restaurants for dinner, mix freely with the local population.

I have spent a lot of very pleasant time in Mazar. On summer evenings we would sit in open-air restaurants on tapchans, raised platforms covered in cushions, watching music videos on a giant screen and sipping bootleg beer that the waiters would smuggle in from the market down the street.

We would take slow-moving rickshaws to get to meetings, travel in unarmed vehicles through the desert to the provinces further north, stop for lunch at teahouses by the side of the road. At one such establishment a local man, bearded and turbaned, asked my colleagues how old I was, and whether I could still bear children. I retreated in haste before any cash could change hands.

Mazar is famed for its hashish, and I saw large marijuana fields throughout the province a few years back. There is a central hashish market, where merchants give out free samples of their wares, hawking their product with pride and gusto, despite the fact that growing, selling, or consuming hash is illegal in Afghanistan.

The young men of Mazar have a bit of a reputation as “dudes” — quick-witted, fast-talking, and not inclined to suffer fools.

The north has its problems, of course. Ethnic tensions run high, with Pashtuns and Tajiks engaged in sometimes violent clashes over what might seem to outsiders to be trivial issues.

A few years ago security forces had to be called out to quell a disturbance at Balkh University, when Tajik and Pashtun students disagreed over which word to use for “university.” The most common variant – pohuntun – comes from Pashto. The Tajiks wanted to substitute the Persian word, daneshgaa. When the Tajik students replaced the sign in the middle of the night, fighting broke out.

A growing insurgency in the north also has its roots in ethnic conflict. The Pashtun community is convinced that armed groups under the Tajik governor have been targeting Pashtun leaders for assassination, although there is no hard evidence to back up their suspicions.

The allegation alone is enough to send some districts straight into the arms of the insurgents, and there are several areas of Balkh that are becoming more and more unstable.

Atta Mohammad Noor, the governor of Balkh province, is a warlord from the mujaheddin years, and keeps a tight rein on his territory. Political freedoms are strictly curtailed, and reporters have to watch their step.

During the presidential elections in 2009, tensions ratcheted up to the boiling point, as Atta squared off against Kabul. An ethnic Tajik, he was backing Abdullah Abdullah, Karzai’s main rival and a former comrade-in-arms from the jihad against the Soviets.

The president was not amused, and tried vainly to gain control of Balkh. Atta did not give an inch, and the local population feared that open conflict would ensue. Fortunately, cooler heads prevaile. Karzai lost Balkh, but won the election.

Now Mazar, a city that is economically booming, socially progressive, and relatively calm politically, has served as the gruesome illustration of what happens when Afghan patience wears thin.

Terry Jones is said to be unrepentant about the action that set off the riots – the “trial” and “execution” of a copy of Quran in his Dove World Outreach Center, which boasts about 50 members. Jones wants to hold Islam accountable for violent actions perpetrated in its name, while selling coffee cups and T-shirts with his favorite slogan: “Islam is of the Devil.”

Perhaps Jones has a right to his actions and hate-filled speech. And the rioters in Mazar are certainly responsible for their own actions.

But Afghanistan is a cauldron, and Jones is actively stirring the pot. It will take very little for the toxic brew to spill over again and again.