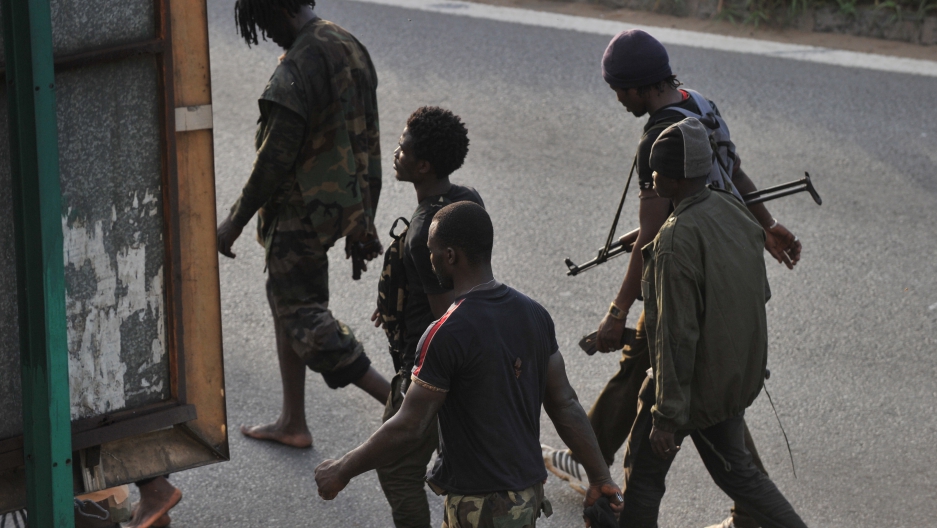 Millitaimen loyal to Alassane Ouattara walk along a street in Abidjan on April 1, 2011. Ivory Coast strongman Laurent Gbagbo's forces repulsed an offensive by his rival Alassane Ouattara on the presidential palace and his home in Abidjan, his spokesman Ahoua Don Mello.
Credit: Issouf Sanogo
Share

ABIDJAN, Ivory Coast — Forces loyal to Alassane Ouattara, whom the international community has recognized as the winner of a contested presidential election in Ivory Coast, surrounded and attacked the residence of the incumbent president on Friday.

Abidjan, the main population center in Ivory Coast, is a supposed stronghold of Laurent Gbagbo, who refuses to cede power to Ouattara.

Ouattara loyalists entered the city on Thursday, and fighting between the rival factions waged for hours, Reuters reported.

The move into Abidjan, the commercial capital, comes after a week of Ouattara loyalists making strong gains across the country as they battle for control over Ivory Coast away from Laurent Gbagbo, who has refused to step down since an election in November.

Ouattara's camp said Friday that their fighters were holding back because they wanted to do everything to take Gbagbo alive. Gbagbo's camp said that its elite republican guard units will fight on and never surrender.

A bar owner in a neighborhood next to the presidential palace reported heavy gunfire all day and said that stray bullets were falling everywhere. "Children are going out into the street to pick up bullets," he said, "and they're still hot."

In the center of the city, sporadic gunfire echoed across the lagoon and the booms of mortar fire could be heard coming from the direction of the presidential palace.

The streets were empty except for the occasional speeding pick-up truck loaded down with heavily armed fighters, and the rhythmic beat of the U.N. reconnaissance helicopters overhead.

The state television station, which had been used by Gbagbo to spread what the United Nations called "lies" and "propaganda inciting hate," has also been a hotly contested site in the city.

Rebels reached the headquarters of the Radio-Television Ivoirienne on Thursday night and the intense battle for the station lasted through the night. The channel's signal was cut at about 10 p.m. on Thursday, amid reports that the headquarters had fallen.

Over the course of the day Friday, the building reportedly changed hands repeatedly and a local resident, who asked not to be named, said that bodies could be seen lying in piles in the courtyard.

Yet Friday evening, the station mysteriously reappeared on screens across the country, broadcasting reruns of pro-Gbagbo debate shows without any sound. The station, it appeared, hadn't yet fallen into Ouattara's hands.

Ouattara's Foreign Minister Jean-Marie Kakou-Gervais invited the Red Cross to come and witness the victory and Gbagbo's capture to assure that he is not mistreated.

Gbagbo adviser Fred Anderson said that no matter how this battle turns out, there will still have to be a negotiation and reiterated Gbagbo's call for a cease to hostilities.

Local U.N. peacekeeping mission chief Choi Young-jin said that as many as 50,000 of Gbagbo 55,000-strong security force had defected or surrendered, leaving only 5,000 of Gbagbo's most loyal and elite units to defend him. These units have been shooting "constantly" at the U.N. headquarters, hitting a U.N. helicopter and piercing the roof of the studio at the U.N. radio station on Friday.

Meanwhile, widespread looting was reported. In some of Abidjan's richer neighborhoods, armed youth went house to house ransacking them and making off with appliances and clothes. In other parts of town, store windows were broken and merchandise stolen.

It was not immediately clear who the looters were, but Gbagbo had recruited and armed thousands of youth in the last days as pro-Ouattara rebels approached the city.

Ouattara's loyalists, the Republican Forces, have swept south over the past week as they have met little resistance from Gbagbo forces and have seized about a dozen towns, PBS reported.

They captured one of the major cocoa-exporting ports, San Pedro, as well as the political capital, Yamoussoukro, in the past two days, Bloomberg reported.

Gbagbo's forces are expected to put up a strong fight in Abidjan, raising fears of more bloodshed.

“Abidjan is on the brink of a human rights catastrophe and total chaos,” Salvatore Sagues, a West Africa researcher for London-based Amnesty International, told Bloomberg. “The international community must take immediate steps to protect the civilian population.”

The U.N. Security Council voted unanimously Wednesday to impose sanctions on Gbagbo in an effort to force him from power.

Gbagbo's forces have been accused of launching attacks and committing a range of rights violations against civilians since the election.

The U.N. estimates that 1 million people have fled their homes as a result of the post-election violence.

About 100,000 of those have fled to Liberia, raising fears that the crisis in Ivory Coast will become a threat to regional stability, the New York Times reported.

“There’s been a lot of investment for peace in this subregion; we’re beginning to see the result of that investment,” she added. “If nothing is done to resolve the crisis, all of these efforts will be undermined.”

Watch this GlobalPost video from Liberia, where militia leaders are recruiting fighters to join the battle in Ivory Coast.

— Hanna Ingber Win and Freya Petersen contributed to this report.