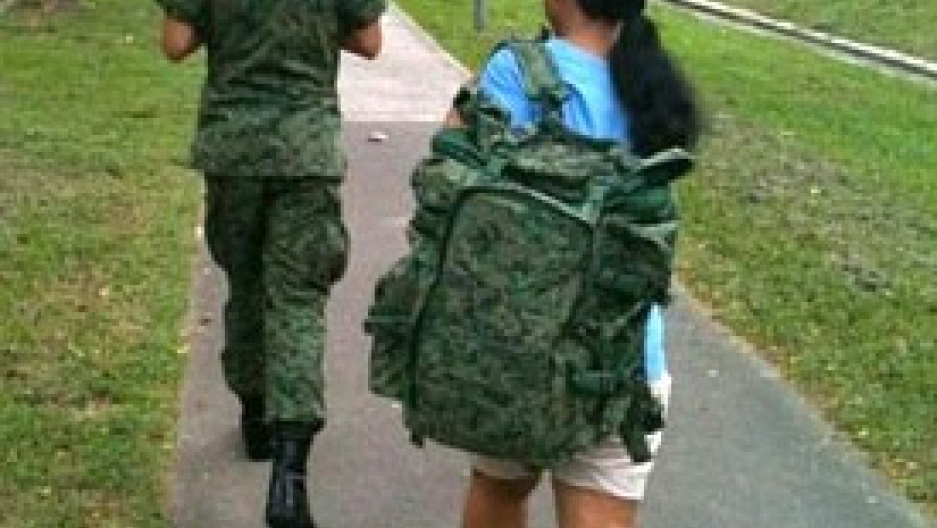 This photo, gone viral in Singapore, allegedly shows a young soldier followed by a maid carrying his rucksack.
Share

UPDATE: The recruit has been located and "counseled" by superiors. A fellow soldier interviewed by Straits Times Indonesia feels "pity" for him. Perhaps the real pity is this kid doesn't have friends who would mercilessly ridicule him for even thinking about handing his rucksack to a maid.

Here we have the latest victim of a cell phone camera lens: a young Singaporean soldier, in full uniform, trailed by a maid lugging his rucksack.

The photo was first uploaded to Facebook, then circulated through message boards and, finally, broadcast on Singapore's local lifestyle Web site, Stomp!.

Now, it's become more than an excuse for Singaporeans to tsk-tsk at a young man's lameness.

The photo has whipped up a debate: are the island city-state's well-off youth are too pampered to defend their nation?

"Speaking as someone who had just completed his full-time national service as an infantry platoon commander in December, I'll admit that I have seen about, say, two out of 10 (soldiers) who fit the stereotype," writes Gerrard Lai in a column for Asia-One News.

Singapore's affluence means its youth are every bit as glued to their gadgets as any American teenybopper. And, because the country is a speck of wealth in a relatively poor region, they're flush with women seeking work as maids. Want a maid in Singapore? Just log onto a special maid clearinghouse where you can sort prospects by photo, age, nationality and religion.

This photo seems to have triggered wider fears that young Singaporeans are far to accustomed to servitude. The armed forces have even responded by insisting it "takes a serious view of the conduct of its servicemen in public" and will investigate, according to Straits Times.

In summing up the online backlash, Asia One writes that many commenters have "questioned his unmanly behavior."

But the article continues: "Some commented that the maid could have just being a good domestic help (sic) and volunteered to carry it for her young master."