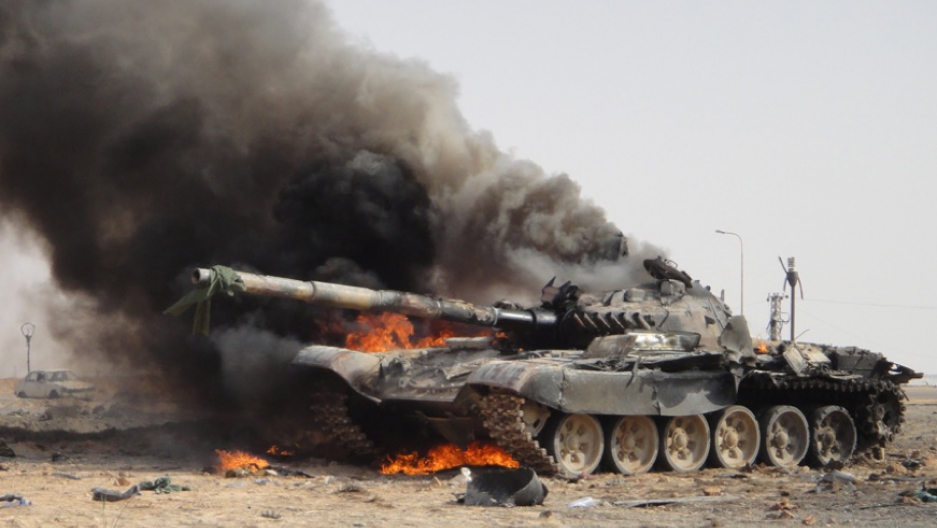 A tank belonging to forces loyal to Libyan leader Muammar Gaddafi smolders outside the gates of Ajdabiya after an allied air strike on March 26, 2011.
Credit: James Foley
Share

BENGHAZI, Libya — Just outside the gates of Ajdabiya, a group of cheering men hoisted a revolutionary officer in fatigues on their shoulders. They said he was the commander of the rebel forces that finally took Ajdabiya the night before.

It’s unlikely, however, that he or his group of irregular soldiers, had much to do with it. By all accounts, allied air strikes have made all the difference.

The bombings destroyed about 20 tanks belonging to forces loyal to Libyan leader Muammar Gaddafi in a matter of hours before the rebels were able to reclaim the town, the same tanks that had bedeviled the rebellion for more than a week.

As the rebel army, which consists mostly of a collection of civilian volunteers, follows the allied bombings from city to city on its push toward Tripoli, it is becoming increasingly clear that they don’t possess the military training or the command structure necessary to carry out a full-force attack on cities considered bastions of support for the Libyan leader.

This reality became all too apparent Tuesday, when heavy artillery fire thwarted the rebels, who had made many gains on key towns in recent days, and forced them back to the key town of Bin Jawad. The setback prompts questions about whether the international air strikes are enough to help the rebellion oust Gaddafi, who has held power for almost 42 years, from the country completely.

It is a reality that is being echoed by some U.S. foreign policy experts back home.

Paul Wolfowitz, a visiting scholar at the American Enterprise Institute, a conservative think tank, and a lead architect of President George W. Bush’s invasion of Iraq, said at a conference Monday that anything short of defeating Gaddafi entirely would be unacceptable.

“We have never dealt with Gaddafi in the state he will be in if he succeeds in keeping control of half of Libya,” Wolfowitz said. “With $6.5 billion, more or less, in gold bullion and probably a lot of bank accounts we still haven’t had access to, Gadadfi is going to be insanely bent on revenge and much more dangerous than anything we’ve encountered before.”

Michael O’Hanlon, a security expert at the Brookings Institute, said that unless the rebels are able to suddenly make rapid progress in their training and coordination, the allies would have to consider escalating their involvement.

“Chances are in the next one to two weeks, they are going to have to figure out if they are going to escalate. And that escalation could cover a wide range of possibilities. Some of which could raise legal issues, such as arms transfers to the rebels. Others could involve putting American Special Forces on the ground or other people to try to figure out what’s going on, to get better battlefield intelligence and help the rebels coordinate more effectively,” he said.

U.S. President Barack Obama, in a televised speech to the nation Monday night, said that the United States had succeeded in preventing a humanitarian catastrophe and that NATO was now ready to take the lead, adding that the alliance would take steps beyond a no fly zone and air strikes to prevent civilians from being killed by Gaddafi forces.

“Going forward, the lead in enforcing the no fly zone and protecting civilians on the ground will transition to our allies and partners, and I am fully confident that our coalition will keep the pressure on Gaddafi's remaining forces,” he said.

Speculation that the opposition is not well enough equipped has increased as it marches toward cities like Sirte, which are closer to the capital and far better defended by the regime.

Rebel forces surrounding Sirte on Monday, for instance, were quickly turned back after an intense barrage of heavy artillery and tank fire. The rebels, for their part, rely mainly on their AK-47s and the pickup trucks, vans and cars they use to carry them to and from the frontlines.

Rebel leaders, however, said that communication among the rebels and between them and NATO, which will assume full command of the international intervention on Wednesday, has been getting better.

“There’s coordination regarding air strikes and populated areas, part of our success was because of this,” said Akmed Khalifa, a spokesman for the Transitional Council. “There’s a line of communication between the military council and allied air strikes.”

Khalifa pointed to the attack on Ajdabiya on March 26 when two lines of rebel volunteers were told to hold back as air strikes began to bombard Gaddafi tank positions.

“This is evidence to support coordination,” he said.

But according to fighters on the ground, attempts at coordination have been more haphazard. One rebel fighting on the front lines outside Ajdabiya said that they fired a volley of rockets to signal to the allied jets above not to strike their vehicles moving in.

Rebel and NATO officials admitted that there was no official collaboration but said that information was being passed back and forth between the coalition and opposition forces.

“We have told … the opposition forces how to maneuver, and we have also told Muammar Gaddafi’s forces what they were expected to do in accordance with the U.N. Security Council resolution,” Navy Rear Adm. Gerard Hueber, chief of staff for the Joint Task Force Odyssey Dawn, told reporters, according to the Los Angeles Times.

Mustafa Gheriani, another opposition spokesman, said in a press conference on March 21 that rebel military officials were communicating with NATO to avoid civilian casualties. The United States and France were coordinating with Yunis Abdul Fatah, head of the revolutionary command, he said.

But the scene on the ground appears much more chaotic and the rebels fighting said they were under little to no direction the day they took control of Ajdabiya — a situation that they said has not improved.

“There are no commanders,” Walid Musa Mohammed, 25, a volunteer who came from Egypt, said. “We don’t wait for commands.”

David Case contributed reporting for this article from Boston.