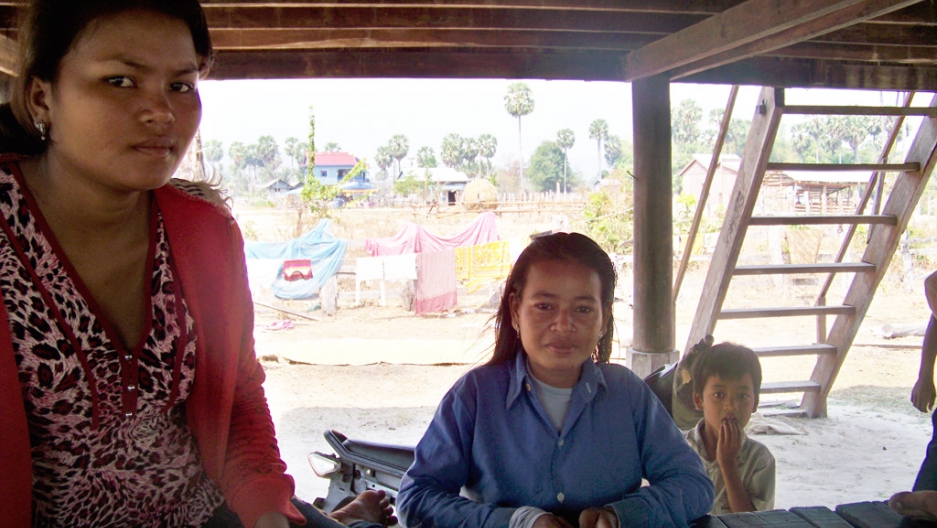 Pah Eang, 22 (left), and Nith Pov, 29 (right), sit underneath their new house, which has become a gathering place for the remaining family members of two accused “sorcerers” who were killed in this remote village six months ago.
Credit: Terry McCoy
Share

BOMNOK, Cambodia — In the midday swelter of early hot season, Pah Eang shivered and walked into a mountainous forest she’d once visited every day. She said she was scared. She hadn’t been to this place, open and silent, in five months. Not since the killings and whispers of magic.

Pulling at her red sweatshirt, Pah dissolved into the Cardamom Mountains that ripple through western Cambodia, and began her search for a place that keeps this 22-year-old awake at night and plagues what’s left of her family. Her path wound deeper until everything was quiet and the only mark of humanity was a bamboo-thatched hut in a clearing so idyllic the savagery of what had occurred there was difficult to imagine.

Last September, Pah’s father and younger brother were killed around 1 a.m. in this hut. The father, Pheng Pah, 46, was stabbed to death while his son, Pah Broh, 15, had his throat slit. When the bodies were discovered the next morning, some villagers in this deeply rural community 25 miles from a paved road rejoiced. They said the father and son were “sorcerers” and had deserved to die.

The killings reflect a disturbing trend in rural Cambodia, where magic is a very real thing and the only way to silence it is through violence, and sometimes, death. An average of three Khmer are accused of sorcery and killed every year, and such witch hunts illustrate the growing chasm between increasingly urban cities and countryside mired in poverty, while showing how deep belief in the occult runs in this culture.

Since 2006, 17 accused sorcerers have been killed in provincial Cambodia, usually following a sickness in the community that villagers found suspicious, according to local non-governmental organizations. This is a far lower rate, however, than in the past. In 2001 alone, eight people were killed for suspected sorcery, a 2002 United Nations human rights report shows.

And always behind these killings, there’s the victim’s family, left to struggle against discrimination and question why such a thing had happened — and whether they may be killed too.

“We don’t have any way to make money now,” said Pheng Pah’s wife, Nith Oun who moved her family to a relative’s house following her husband’s death. “I don’t have my husband. I don’t have my son. Because of [my neighbors’] superstitions. Because of magic. I’ll never forgive them for this.”

What’s more, roughly two-thirds of homicides involving sorcery don’t make it to criminal court. Of the 15 different cases involving sorcery accusations and homicide since 2006, only six have led to prosecution, Licahdo, a human rights group in Cambodia, recently reported. It’s as though such cases fall somewhere between the tangible world where laws and evidence are trusted — and the metaphysical, where vigilante justice warrants more faith.

After all, how can you prove magic?

The farther out you go into Cambodia’s countryside, however, down cracked dirt roads and into under-policed areas, the less proof matters. Belief does. Nearly everyone wraps talismans around their waists to protect against sorcery and evil spirits, and soldiers flex Sanskrit tattoos that they believe will fend off bullets in battle. Such practices and beliefs create an alternate geography that most rural Khmer inhabit where culture, fear, and magic coalesce.

“Most Cambodians live in a magical worldview,” said Jan Ovesen, a professor of anthropology at Uppsala University in Sweden who is researching magic in Cambodia’s countryside. “And accusations of sorcery are a function of this magical world view. You have to attribute misfortune to someone or something. Misfortune is not by chance. They think, ‘Someone must be wishing us evil.’ ”

According to NGO reports and more than a dozen additional interviews with villagers and local officials, a chilling story of revenge and delusion has emerged that describes what happened to Pheng Pah and his family. By all accounts, the accusations of witchcraft began as murmurs.

It was last August, one month before Pheng’s death, as planting season swept through this agrarian village called Bomnok at the base of the Cardamoms. A 23-year-old neighbor, recently-engaged Mao Chanly, had become devastatingly ill following an attack by a family dog her parents swore wasn’t rabid. No one in the village knew what was happening. People were panicked and confused. The murmurs grew louder and louder.

Mao’s family gave her an IV and mountain herbs, but nothing worked. Weeks passed. The sickness came at night; Mao described it to her parents as invisible hands grabbing and ripping her. Growths surfaced. Her parents grew desperate and they took her to the community pagoda.

What the monks said there confirmed the rumors: There was a sorcerer in the community. And Mao would die because of it.

The scene seems surreal, but it closely echoes what can often happen in rural Cambodia, according to Licadho and Adhoc, another human rights group in Cambodia. In places far removed from substantive education, superstition can quickly supplant rational explanation.

“After the sicknesses, the villagers create a plan to kill the [accused] sorcerer — by secret,” said Ek Sothea, a Licadho researcher, describing a typical homicide of an accused sorcerer. “They don’t tell the police. They think the police won’t believe them; the law protects sorcerers. They don’t have any evidence, but they believe that there are sorcerers. So everyone plans to kill by secret.

“They think the sorcerers are without morality. That they are evil.”

Soon, Mao was dead. And for a week afterward, the threats against Pheng and his family intensified, finally hitting a crescendo on a late September night when an unknown number of assailants descended on his forested hut where Pheng and his son slept guarding their rice fields.

No arrests were made after the killings. Commune police say all related suspects have fled, and there’s no way of knowing where to.

In rural Cambodia, such occurrences, especially when there aren’t any arrests, usually end like this, without firm closure. The effects linger. And no one forgets.