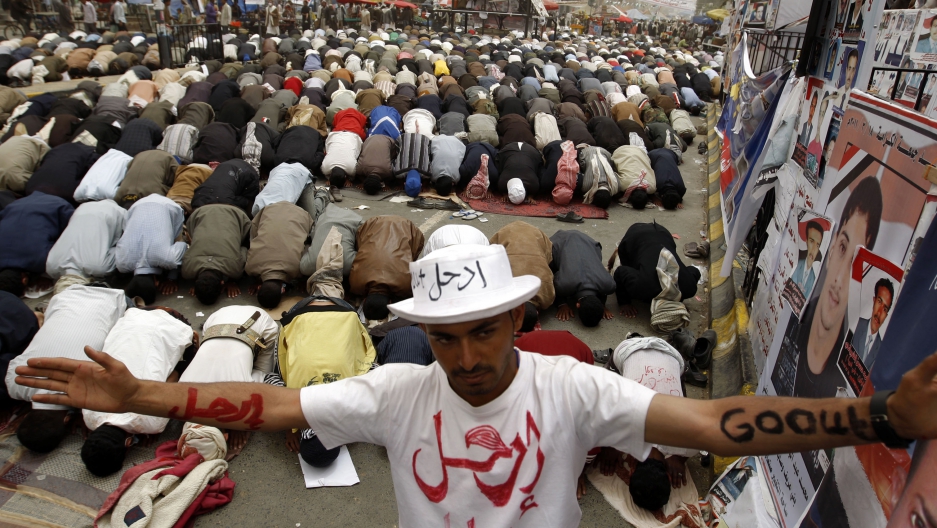 Yemeni anti-government protesters perform noon prayers during a demonstration against President Ali Abdullah Saleh, calling for an end to his 32-year rule, in the capital Sanaa on March 28, 2011 a day after the embattled leader warned of Somalia-like "chaos" in Yemen if he steps down without an agreed successor.
Credit: Ahmad Gharabli
Share

More than 100 people were killed in a munitions store in Yemen on Monday, including women and children from surrounding areas though to be involved in looting the factory, according to reports.

The blast, in the town of Jaar in the southern Abyan province, appeared to be accidental but there was no word on the exact cause, medical and security officials reportedly said.

According to Reuters, the blast occurred after Jaar residents broke into the factory to steal ammunition a day after clashes broke out in the town between Islamist militants and the army.

Taking advantage of the country’s worsening security during a wave of anti-government protests against President Ali Abdullah Saleh, who has ruled Yemen for 32 years, militants had taken over Jaar and the factory on Sunday, The Washington Post reported.

The fighters had reportedly already left after taking what they wanted from the factory, which makes munitions, Kalashnikov weapons and explosives used in road construction in the mountainous area.

The deputy governor of Abyan province, Saleh al-Samty, blamed the national government for the tragedy, saying it was a result of the lack of order resulting from security units abandoning their posts.

Meanwhile, fighting intensified between Yemeni security forces and members of Al Qaeda in the Arabian Peninsula over the past two days, CNN reported.

On Sunday, it reported that seven Yemeni soldiers were killed when Qaeda militants attacked a military checkpoint a mile north of the government complex in Marib Province, east of the capital, Sanaa.

The attackers also used grenades and machine guns, and took two military vehicles from the checkpoint, the security forces said.

Saleh has been under intense pressure to hand over power, suffering the defections of several senior military figures, sustained protests in Sanaa, and international condemnation over a recent crackdown that saw scores of protesters killed by government forces.

Protesters have been camped out in the square in Yemen's capital, Sanaa, citing government corruption, a lack of political freedom and high unemployment in their calls for Saleh's ouster.

The Yemeni government, meanwhile, said the weekend fighting was a sign that strong measures are needed to combat instability within the country.

Saleh, who argues that he is best equipped to lead the fight against Islamists running insurgencies in the country's north and south, last week told opponents he was willing to surrender power, but only to "safe hands." His statement, UPI noted, indicated no time frame for a power transfer.

On Sunday, Saleh told the General People's Congress, Yemen's ruling party, that no more concessions to resolve the uprising in Yemen will be made.

"I derive my strength from the people, not from the tank," Saleh said, UPI reported.