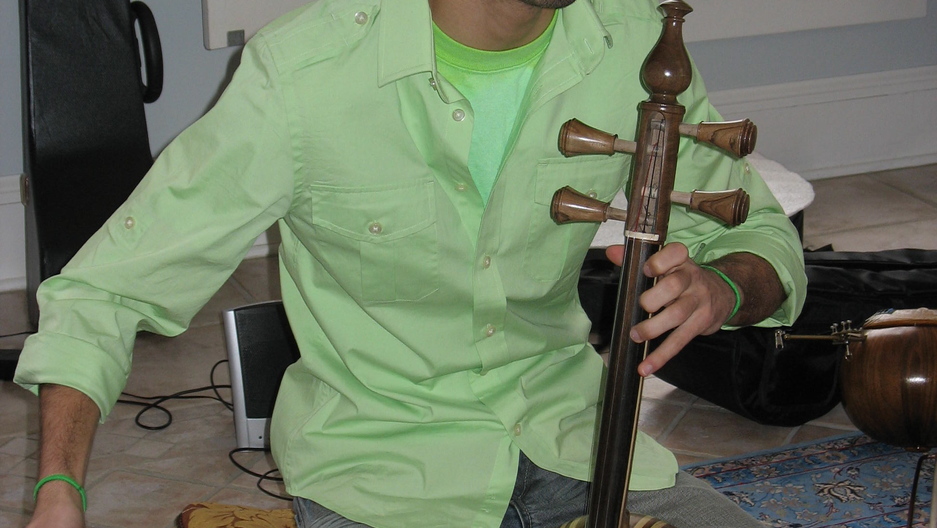 By Bruce Wallace Cellist Yo-Yo Ma's renowned Silk Road Ensemble kicked off a North American tour Sunday night in Boston. The tour features leading musicians from around the world, including Kayhan Kalhor, a master of a Persian stringed instrument called the kamancheh. Kalhor is one of the reasons the instrument is enjoying a renewed popularity. This popularity stretches from Tehran all the way to Toledo, Ohio, where Shayan Parsai lives. Parsai is a junior in college, and he's been playing western classical violin since he was four. Last fall, he picked up a kamancheh his father had bought him in Iran. Traditionally a person who wanted to learn the instrument would find a master to teach them. But there aren't really kamancheh masters in Northwest Ohio. There is, however, YouTube. He started watching YouTube of kamancheh players, including several of Kayhan Kalhor. "Not only did I get the sounds that I wanted to hear and the music I wanted to hear," Parsai says, "But I also got to see how – what strings and what movements and how they were holding the bow and how they were turning the fiddle. I acquired these skills simply by watching the videos over and over." One big difference between the western violin and the kamancheh is that the kamancheh is held vertically. A spike at its base holds it off the floor. The instrument is rotated around on this spike so the bow can reach different strings. Players kneel on the ground behind the instrument. Parsai says that one of the challenges when he first started playing was keeping his legs from falling asleep. He kept working on it, though, and soon he had learned all he could from YouTube. So he used two more tools available to the modern kamancheh student: Facebook and Skype. He sent a message to Kayhan Kalhor on Facebook telling him how he'd been inspired by his music, and about his progress learning the instrument. A few weeks later the two connected over Skype for a lesson. Kalhor focused on how Parsai was sitting and how he was bowing. "He wanted to emphasize that the left hand makes the notes but the right hand is what makes sound," Parsai Said. "The expression comes from the right hand." Since Skyping, Kalhor and Parsai have met in person for a lesson, and have plans to connect on Skype again in the near future. Kalhor says it's important to him to be in touch with younger players like Parsai. He sees it as part of the process of keeping kamancheh teaching alive in a world where the traditional master-student model doesn't work. "In old times one master had like handful number of students. They would live together, the relationship was very close, sometimes the student becomes a member of the household," Kalhor said. "We cannot replace that. We haven't actually come up with an efficient way of teaching music." For people like Kalhor, the good news here is that there are a lot of people eager to learn. Hossein Omoumi teaches Persian classical music at the University of California, Irvine. He thinks this interest in Persian music is partially a reaction to restrictions the Iranian government put on music following 1979's revolution. "Before the revolution family didn't support young generation to play music," Omoumi said. "But today all the family they support the young generation, because they want to conserve it, they want to have it." Parsai is excited about being in touch with Kalhor, and eager to play a role in preserving this music and sparking more interest in modern-day Iran in general. "Especially with everything going on recently in the Middle East I think it's very important that us as Americans, or internationally, are aware of what's going," he said. "And hopefully music could be one way to keep people in the know." As for getting that music out into the world? Well there's always YouTube. Shayan Parsai and Mahyar Mohebi Moghadam play a folk song from Loristan Province in Iran. Parsai plays the kamancheh, Mohebi Moghadam plays a Persian drum called the "daf".