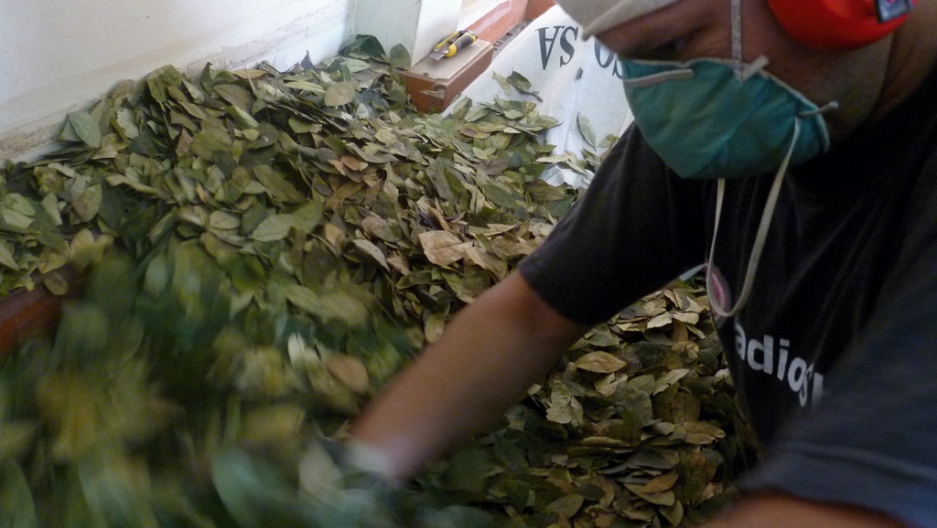 LIMA, Peru — Coca leaves can provide a caffeine-like boost. They're made into pasta and cookies. And they're chewed all across the Andes.

But the leaves can also be turned into cocaine, which is why a United Nations treaty calls for the eradication of all coca plants and for an end to the practice of chewing the leaves.

That doesn’t sit well with Bolivian President Evo Morales, a member of the indigenous Aymara group and a former coca grower. Morales claims the U.N. treaty is racist and outdated and is lobbying to remove the provision on coca leaves.

He and others claim that demonizing coca is misguided — akin to frowning on barley because it can be distilled into whisky.

“If this is a drug, then you should throw me in jail,” Morales said as he held up a cluster of coca leaves then popped them into his mouth during a U.N. meeting on drugs in Vienna in 2009.

Back in 1961, the U.N. Single Convention on Narcotic Drugs classified the coca leaf as a dangerous narcotic, putting it in the same league as cocaine and heroin. But the decision was based on a much-cricized study published in 1950 by a U.N. commission.

Revealing a certain degree of racism, commission head Howard B. Fonda told an interviewer at the time: “The daily, inveterate use of coca leaves by chewing ... not only is thoroughly noxious and therefore detrimental, but also is the cause of racial degeneration … and of the decadence that visibly shows in numerous Indians.”

Since then the commission’s findings have been debunked. A World Health Organization study in 1995 determined that chewing coca has no negative health effects and could have some potential benefits. For example, the leaves contain calcium and other minerals and vitamins.

Morales’ quest to amend the U.N. treaty is largely symbolic since chewing coca is legal in Peru and Bolivia. Still, proponents say the change would remove the stigma from coca and enhance the market for a growing range of natural products made with coca leaves.

At a Lima bakery, owner Manuel Seminario supervises the production of pasta, cookies and cakes made with a green flour consisting of ground-up coca leaves. He also produces an energy drink made of barley, honey and coca leaves.

“This could be a natural alternative to Red Bull,” Seminario said as sipped a mug of the thick green beverage. “It’s better than ginseng or coffee. The world needs this.”

Even the Peruvian government is profiting from coca.

Although Peruvian authorities are attempting to roll back coca cultivation to strike a blow against drug traffickers, a government-owned business, called ENACO, buys and sells coca leaves and produces coca tea.

But for now, coca leaf products can only be sold domestically because the 1961 U.N. treaty also bans their export. Seminario, the baker, believes the Morales amendment could be the first step toward legalizing coca leaf exports.

Among U.N. member states, there is wide backing for switching tacks on coca policy. But the change requires unanimous support and the U.S. administration opposes the Morales amendment. A statement released in January by the U.S. Embassy in Bolivia said Washington's position “is based on the importance of maintaining the integrity of the 1961 Convention, which is an important tool for the global fight against drug trafficking.”

The five other U.N. members opposed to the amendment are Sweden, the United Kingdom, Canada, Denmark and Germany. One of their concerns is that giving coca the U.N.’s stamp of approval would serve to legitimize coca farmers who sell their leaves to drug traffickers.

Peruvian economist Hugo Cabieses points out that just a tiny fraction of the 300,000 tons of coca leaf grown each year in Peru, Colombia and Bolivia is used for chewing or food products. The rest is mixed with gasoline, uric acid and other toxic chemicals to make cocaine.

For all of Morales' efforts, the number of hardcore coca chewers may be diminishing as highland Indians migrate to the cities and give up traditional practices, said Alejandro Vassilaqui, who heads CEDRO, a Peruvian anti-drug organization. “Each day less people chew the coca leaf because young people leave the Andean regions and they do not carry the custom with them anymore,” he said.

But coca leaf products are also winning new converts. The website for the U.S. Embassy in Bolivia recommends coca tea to help relieve altitude sickness and the hot drink is served at tourist hotels throughout Peru and Bolivia.

“I have not drunk a cup of coffee since I’ve been here,” said Jerry Borscheid, a retired Teamster from Minnesota who was visiting Peru for the first time. Holding up a cup of coca tea, he said: “It’s been this every morning.”

Borscheid considered bringing a box of coca tea back home but ruled out the idea when he learned it was illegal in the United States. “If I get caught in the airport, they could arrest me, right?” he said. “I don’t want to chance it.”