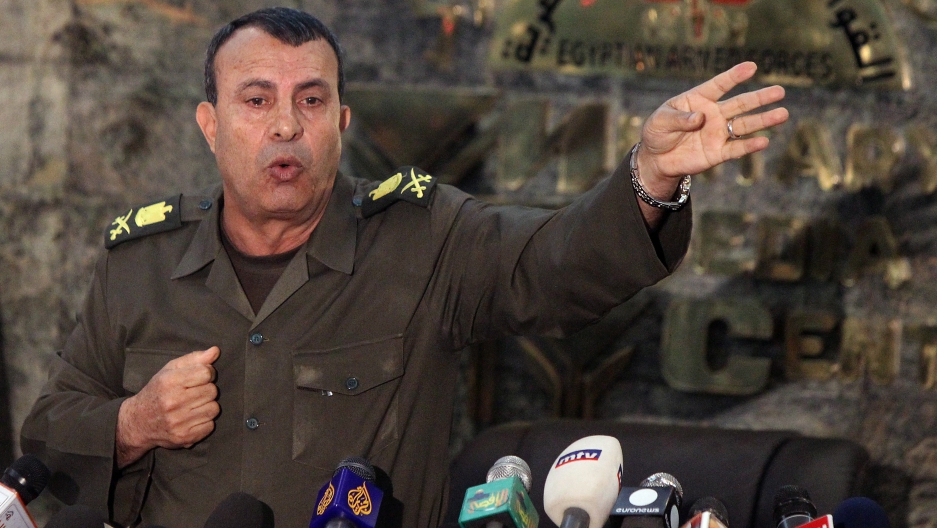 Egypt army spokesman Ismail Etman gives a press conference on March 28, 2011 in Cairo, during which he said that Egypt will hold its first parliamentary election since the fall of president Hosni Mubarak in September and the decades-long state of emergency will be lifted for the polls, but no date has yet been decided for a presidential vote he added.
Credit: Khaled Desouki
Share

Hosni Mubarak, the former Egyptian president, has been placed under house arrest in the Red Sea resort of Sharm El Sheikh, according to a statement by Egypt's ruling generals who took power after Mubarak's ouster last month.

The statement posted on the Facebook page of the Supreme Council of the Armed Forces countered speculation that Mubarak, 82, had gone to Saudi Arabia for medical treatment.

The post read: "Out of the supreme military council's belief in the importance of maintaining communication with the Egyptian people and the youth of the revolution, we stress [that] news of the departure of former president Mohamed Hosni Mubarak to Tabuk in Saudi Arabia is not true, as he is under house arrest along with his family."

Saudi Arabia's King Abdullah has repeatedly offered Mubarak sanctuary in the kingdom, but for now Mubarak, facing corruption charges, is under a travel ban and asset freeze along with his his family.

The Supreme Council also said Monday that promised parliamentary elections will be held in September, and that Egypt's emergency laws that were put in place when Mubarak took office in 1981 will be lifted before then, VOA reported. The generals promised to hand over power to a civilian leadership after an election.

But the armed forces have come under criticism for recent heavy handed actions and for drafting a law banning most strikes and street protests, according to the Guardian. Soldiers have reportedly been accused of torturing protesters and forcing arrested women to undergo "virginity checks." And last week, military police stormed a protest by Cairo University students demanding the removal of the dean of mass media, who has close ties to the former ruling National Democratic party.