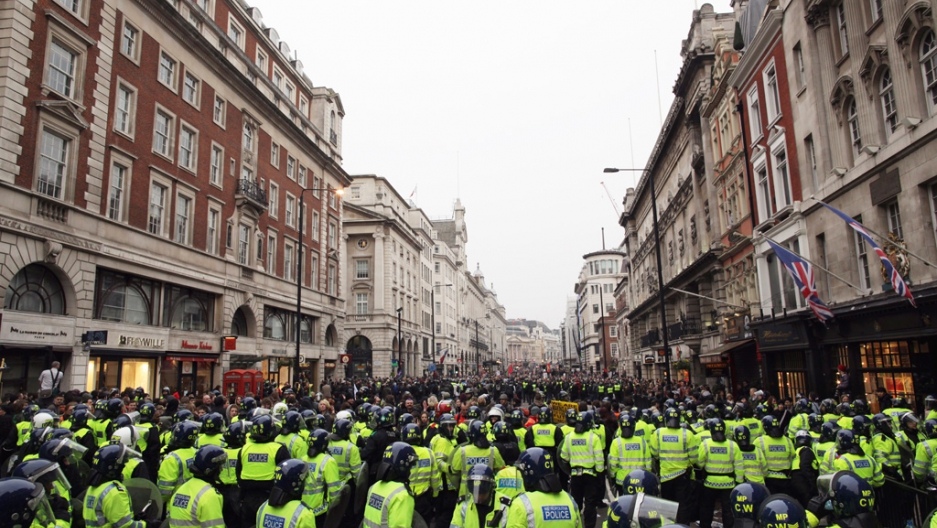 Police officers and protesters clash on Piccadilly during marches in protest at government cuts on March 26, 2011, in London, England.
Credit: Dan Kitwood
Share

LONDON, U.K. — About half a million people marched through the streets of central London today to protest against austerity measures.

Protesters wove past all the major tourist attractions — Big Ben, Trafalgar Square, Piccadilly Circus before reaching Hyde Park. Many marchers held signs paying tribute to the protests in Egypt — one read, "Rise up, Protest Like an Egyptian." Other signs displayed British wit: "You are tightening your belts around our necks."

It was the country's largest demonstration since 2003, just before the invasion of Iraq, when a million people turned out in protest.

This time, the massive turnout was due to government spending cuts by the coalition government. Prime Minister David Cameron is trying to eliminate Britain's structural deficit in four years. In order to do this, dramatic cuts in public spending — the largest since the Great Depression — are being put in place.

The event — called the March for the Alternative — drew people from all over the country. It was organized by the Trade Union Congress, Britain's equivalent of the AFL-CIO, and most of those marching were union members.

There were small outbreaks of trouble: The main shopping crossroads, Oxford Circus, was occupied by anarchists who scuffled with police and vandalized the flagship stores of some of Britain's most popular retail outlets. Fortnum and Mason's — a store whose tea and shortbread biscuits are beloved by Americans and Japanese tourists — was occupied by UK Uncut, an activist group that targets corporate tax evaders. There were scuffles with police here, as well.

Despite the minor clashes, and the chaos of trying to get so many people organized at the start of the march, the crowd was good-natured. Outside the Wellington pub in the Strand, a number of union members and others enjoyed a quick pint before setting off.

Paul Naylor, who runs the Legh Arms pub on the edge of Manchester, said there were many reasons he had made the journey from up north. He believes that 30 pubs a week are closing in Britain because beer is the easiest thing for the government to tax.

"But the main reason I'm here is for my kids," he said, nodding to his teenage son. The Conservative-led coalition has trebled university tuition fees, and cut the student discount on public transportation. His son wants to study marine biology, but the cost of that education is starting to be prohibitive, Naylor said.

A regular from his pub, Ian Clarke, runs a funeral home. The cuts are affecting him as well. It's a measure of how far government aid reaches in British society that until recently people who are on welfare could get a portion of funeral costs paid for by the state. That is going to stop, Clarke said. How will people in his area pay for funerals now? "They are relying on me to be nice and cut them a big break on price."

The men ask a basic question, "We're broke, but we can find money to bomb Libya at the drop of a hat. Where does that come from?"

That was a point made in many posters being carried along the parade route. Sarah Annwyl, who had journeyed into London from Somerset, said the cuts had little to do with eradicating the deficit. "It's a smokescreen for ideology. They want to cut public services, because they are Thatcherites."

The marchers trundled along to the sound of marching bands and the drone of vuvuzelas could be heard the whole 3-mile length of the route.

People fell out along the way to eat pack lunches or take-away sushi and there were plenty of stops for pints of liquid refreshment before the marchers arrived at Hyde Park for the speeches.

Labour Party leader Ed Miliband told the crowd, "We know what the government will say: That this is a march of the minority. They are so wrong. David Cameron: You wanted to create the big society — this is the big society. The big society united against what your government is doing to our country."

But this was not, in fact, a cross-over crowd. The assembly today was very much from the progressive part of British society. There was another big crowd in London today. An few miles west along the Thames, the Oxford-Cambridge Boat Race probably drew another 100,000 people out into the streets.

The lack of shared interests between those who live in the upscale parts of West London, where the boat race took place, and those who were marching is stark — and if the economy does not respond to Cameron's economic strategy — potentially dangerous.

At the end of the march the big question remained: What happens next? Clarke said people should just carry on marching. "It works. I'm from Belfast originally. We marched and marched and finally got what we wanted." Said Naylor, "It worked in Tahrir Square, it can work in Trafalgar Square."