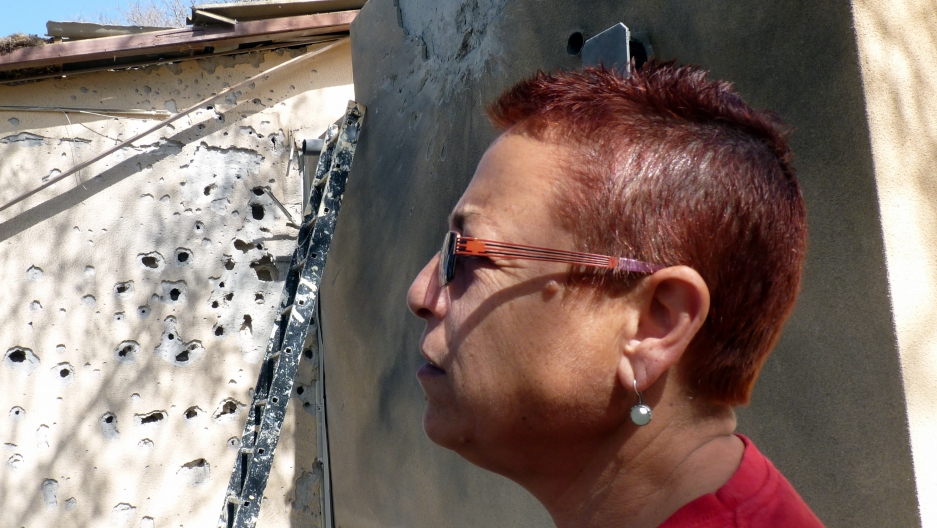 Drorit Dorom stands outside her home in southern Israel. The house was hit by a mortar shell fired from the Gaza Strip last week.

Share
By Matthew Bell Palestinian medics said at least 17 people were injured overnight by Israeli air strikes. The bombing amounted to one of the most extensive Israeli attacks on the Palestinian territory in two years. The Israeli military said it was a response to more than 50 rockets and mortars fired from Gaza into southern Israel in recent days. People injured in last night ¹s air strikes included Hamas security men and Palestinian civilians. Seven children were also hurt, according to Reuters. Palestinian witnesses said the bombs fell on Hamas training camps, along with a cement factory and a workshop. The Israeli military said it also destroyed two tunnels intended to be used by Palestinian militants to sneak into Israel and carry out terrorist attacks. Drorit Dorom is a 55-year-old mother, born and raised on a kibbutz near Israel ¹s border with Gaza. Like many Israeli homes, her house has a small safe room. It has steel shutters and the walls are made of reinforced concrete. Dorom's safe room doubles as a guest room and it is also where she has her computer. On Saturday morning, she was sitting at the computer when she heard a loud explosion. "I don't know why, the first thought that came into my mind is, what happened to the old lady who lives next door? She is alone," Dorom said. She said she got up and went to check on her neighbor, who was shaking with fear. "So, I took her and we ran to her bomb shelter," Dorom said. "We succeeded in sitting on double bed, I'm holding her hand, and boom, the second explosion." That blast,  ¬ it turned out  ¬ was a mortar shell that landed directly on Dorom's house. It slammed into the side of her bomb-proof room, where she had been sitting about two minutes before, sending chunks of concrete across the floor. Dorom said everyone keeps telling her it is a miracle she is alive. She said she is not a religious person and dismisses the idea of a miracle or karma. But standing outside, surveying the damage to her home, she said there is, in fact, a lesson here for the rest of the world. "I want everyone to understand," Dorom said. "It's not that we shoot at them all the time. It's both ways. They get hurt. We get hurt. There is no solution other than peace." But things have been moving in precisely the opposite direction. Israel recently intercepted a ship full of weapons that it said were from Iran, headed for militants in Gaza. The Israeli military said the shipment included six long-range anti-ship missiles. At the same time, the barrage of mortars from Gaza launched over the weekend (including the one that hit Dorom's house) marked an escalation as well. In a rare move, Hamas said its militants took part in Saturday's attack. Over the last two years, Hamas is largely thought to have maintained a ceasefire with Israel, while smaller militant groups have fired the rockets. Muhaimer Abu-Sada, a political scientist at Al Azhar University in Gaza, said Hamas feels challenged by Mahmoud Abbas. The president of the Palestinian Authority in the West Bank  ¬ who is also known as Abu Mazen ¬ recently called for a truce. He wanted a meeting in Gaza to end the Hamas-Fatah split that has kept the two Palestinian territories divided since 2007. But Abu-Sada said Hamas sees such a visit by the leader of its secular rival as a threat. "Hamas would like to keep its control and grip over the Gaza Strip and that is why they are trying to sabotage Abu Mazen ¹s visit to Gaza by launching these missiles and mortar shells against Israel," Abu-Sada said. Abu-Sada said Hamas is taking a big risk by stepping up rocket attacks. If one or more projectiles end up killing Israeli civilians or hitting a major industrial facility, the Israeli government could respond with another major offensive against Gaza. Many Israelis also believe it is only a matter of time.