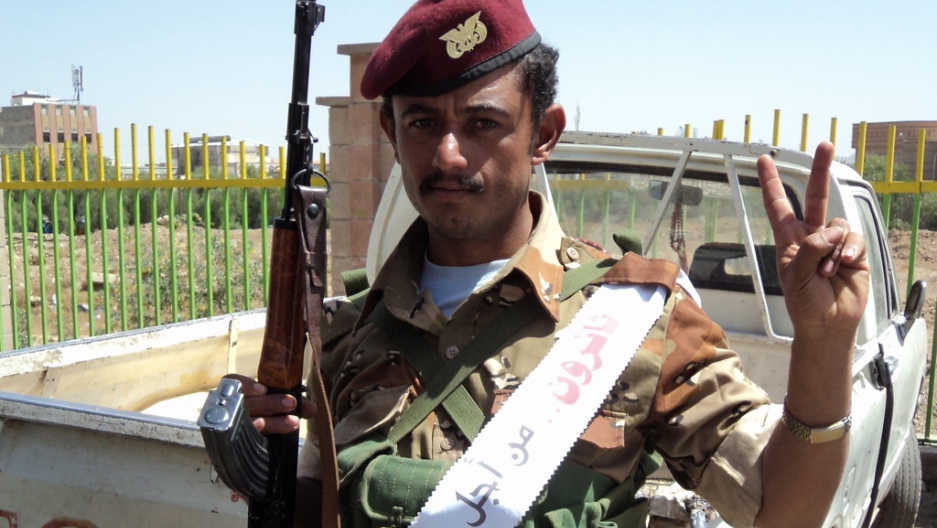 SANAA, Yemen — Major General Ali Muhsin al-Ahmar, one of Yemen’s top military commanders, announced today that he had defected from the government of the embattled president, Ali Abdullah Saleh, to join the country’s growing calls for revolution.

The general, who is commander of all armed forces in northwestern Yemen, was joined by several other top military officials.

Although the defections are the most serious threat to the president’s grip on power since protests began several months ago, the military has effectively been split into two opposing sides — one side for, and one side against, the president — raising concerns that there could be an internal battle for control of the military.

The country's defense minister released a statement on Monday saying that any "muntinees" would be crushed.

“Officers in the military, who are an important part of the community and defenders of the people, I declare, on their behalf, our peaceful support of the youth revolution,” Ali Muhsin said during his press conference Monday.

The violence, much of it broadcast around the world, led three ministers, 24 members of parliament and at least two diplomats to resign.

On Sunday, men loyal to the general, who pledged to protect all anti-government demonstrators against further attacks, replaced the Yemeni security forces that had been securing the area around the protest camp at Sanaa University.

Monday afternoon, protesters welcomed the soldiers as they hoisted them aloft on their shoulders chanting, “We are one, the army and the people.”

It was a scene reminiscent of the final days of the Egyptian uprising that led to the toppling of that country’s longtime leader, Hosni Mubarak. The military’s decision to protect protesters there turned the tide once and for all against the Mubarak regime.

The situation in Yemen, however, could be more complicated. The military, which is split into four regional commands, appears to be divided in its support for the protesters and the president.

Soldiers guarding the protest camp’s perimeter wore white sashes displaying their support for the youth revolution. Some sashes declared, “Get out [President Saleh] for a better future.”

Several high-ranking officers loyal to Ali Muhsin addressed the demonstrators on a stage that had been set up in front of Sanaa University, pledging their support as the thousands gathered there celebrated.

Some Yemeni protesters, however, remained skeptical of the general’s actions.

“Ali Muhsin is just another member of the regime until today. He wants power, he isn’t with us,” said one activist.

Ali Muhsin was the top military commander during most of Yemen’s six wars against the al-Houthi rebels in the northern part of the country. While the fragile cease-fire between the al-Houthi rebels and the Yemeni government is still holding, the general has been widely criticized for his handling of the situation and ongoing refugee crisis that has emerged.

Before Monday morning, in fact, the general’s photo was often hung alongside photos of Saleh and other hated political figures labeled “criminals.” Protesters rushed to remove photos of Ali Muhsin following his press conference Monday morning.

Tanks and other armored vehicles have been deployed at strategic points throughout Yemen’s capital. Six American M60 Patton tanks have blocked access to Yemen’s main highway, the 70 Meter Road, less than one mile away from Saleh’s presidential palace.