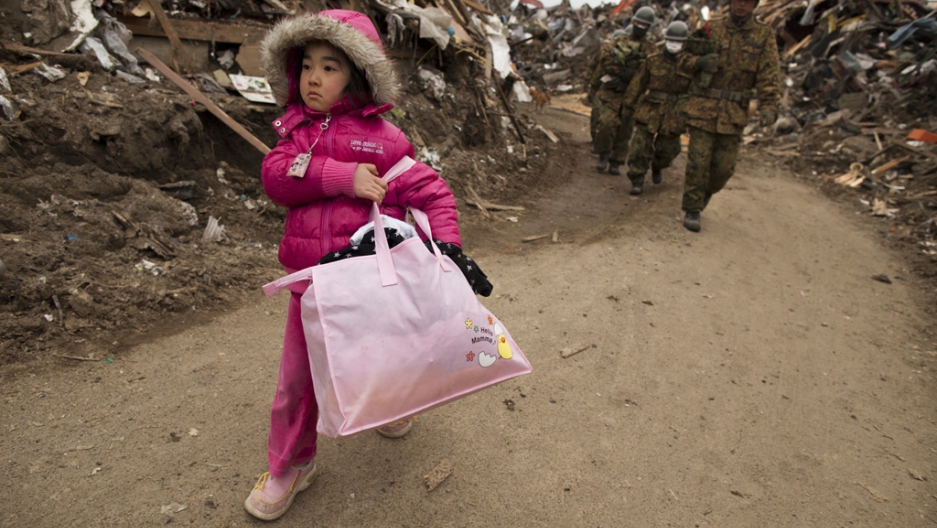 Neena Sasaki, 5, carries some of the family belongings from her home that was destroyed after the devastating earthquake and tsunami on March 15, 2011 in Rikuzentakata, Miyagi province, Japan.
Credit: Paula Bronstein
Share

MELBOURNE, Australia — In the wake of Japan’s nuclear disaster, Vietnam has quietly confirmed its plans to build a nuclear reactor by 2020.

Officials in Vietnam, which is eager to continue its economic rise, have said that safety will be a priority but that they will continue to work toward nuclear power as a way to ensure the country is able to meet its energy needs.

A statement published on the Ministry of Foreign Affairs’ website last week read: “Viet Nam puts nuclear safety-related issues [as] a top priority. This is particularly important in the context of climate change and natural disasters, particularly the earthquake and tsunami [that] just happened in Japan.”

Vietnam plans to have eight operational nuclear reactors in the next 20 years, with Japanese and Russian assistance.

Vietnam’s insistence on going ahead with its nuclear plans differs from the reaction of other countries. The United States decided to halt nuclear plans, as a noisy debate over nuclear safety ensued. German Chancellor Angela Merkel also said that the seven German nuclear power plants built before 1980 would be taken offline, at least until a comprehensive review of the entire industry could be conducted.

One reason Vietnam may differ in its response is that it is not an earthquake-prone nation, though it is one of the most storm lashed countries in the world.

International climate change experts from the World Bank, Oxfam and the UNDP have said that Vietnam may find itself in the top five or 10 nations most affected by climate change. Sea level rise, especially in the southern Mekong Delta, will be a serious issue in years to come, with worst-case scenarios putting the rise at 1 meter. This could have obvious effects on nuclear reactors built in affected areas.

Vuong Huu Tan, head of the Vietnam government's Nuclear Energy Institute, told GlobalPost that climate change has already been factored into plans and that the nuclear reactors would be up-to-date and meet all EU standards.

Referring to Japan's disaster, he said: “It has not changed the decision to continue with the nuclear power plan. [Japan] uses the old type of reactor built in 1966 which needs electricity to pump water ..." Vietnam, on the other hand, has already planned for “the other technology, the pressurized reactor," he said.

The economy is a major driving force behind the desire for nuclear power in Vietnam.

Vietnam expert Carl Thayer, a professor in Canberra, said that “Prime Minister Nguyen Tan Dung is part of the policy circle that has identified future energy shortages as a major brake on Vietnam’s development." He decided that nuclear power was the best response to address future growing demand for energy, Thayer said.

Blackouts are already common and there will only be more demands placed on Vietnam's power in the years ahead. A large part of Vietnam’s power supply, which is entirely by the state-owned Electricity Vietnam, comes from hydroelectricity. The recent country-wide water shortage means the dams are at their lowest point yet.

“By 2020, Vietnam will run out of current resources for energy. So we are looking at nuclear power as an alternative, but not the sole supply of energy. We want to have diverse sources of power, so we are also looking at solar, wind and other sources of energy," said the government's Vuong Huu Tan.

Le Phuon Tram, 28, works for a multinational in Saigon but is from Ninh Thuan province, where the first nuclear power plant is planned. She said blackouts were a regular, irritating problem but she remained skeptical of nuclear power.

“Nuclear power is controllable but the risk is there and it is not the only alternative [source of power]. I personally prefer solar and wind energy which. Building nuclear power plants is preparing for the end of the earth," she said.

Despite nuclear deals being signed as recently as November 2010, the decision to go nuclear was made in the mid-1990s and endorsed by the National Assembly at the Ninth Party Congress 10 years ago.

Vietnam has in the past responded relatively well to disasters. Ian Wilderspin of the UNDP said: “The government has long experience in dealing with floods and storms and much of the same mechanisms would presumably come into action responding to other types of disaster.”

Early warnings, evacuation and supplying aid to affected households are all areas Vietnam has excelled at in the past.

Capacity, however, is another issue. Insiders speaking off-record have expressed frustrations at management of state-owned EVN and PetroVietnam; a nuclear industry is a large step up for still-developing Vietnam.

Professor Thayer says that it is imperative that Russian and Japanese experts be heavily involved in the development of this new industry.

“Vietnam faces a critical shortage of specialists and technicians who must be trained between now and when the nuclear plans come on stream. This issue does raise a major question about capacity to manage effectively a very modern industry," he said.

Helen Clark, who lives in Hanoi, reports for GlobalPost about Vietnam.